Kamal Haasan Celebrates 60 Years Of Cinema With A Huge Show In Chennai!

Ungal Naan, a celebratory event marking 60 years of Kamal Haasan in indian cinema was held in Chennai over the weekend.

Kamal’s entry was preceded by the star thanking 60 important people in his life and the list started with producer AV Meiyappan who introduced him into the world of cinema and ended with his mother Rajalakshmi Srinivasan and finally the people of Tamil Nadu.

Actor Rajinikanth who briefly disrupted the show with his entry, as cheers from fans rang loud, came up on stage towards the very end.

Rajinikanth who is touted to finally announce his political party this year said,

“Miracles are happening all around us. For instance, two years ago Edappadi Palaniswami would not have imagined becoming Tamil Nadu’s Chief Minister. When he did, many said his rule may not last a couple of weeks. It’s been two years now, he has been in power overcoming all hurdles. Miracles have happened yesterday, they continue to happen today and will happen tomorrow as well,” he said as audience erupted in cheers. 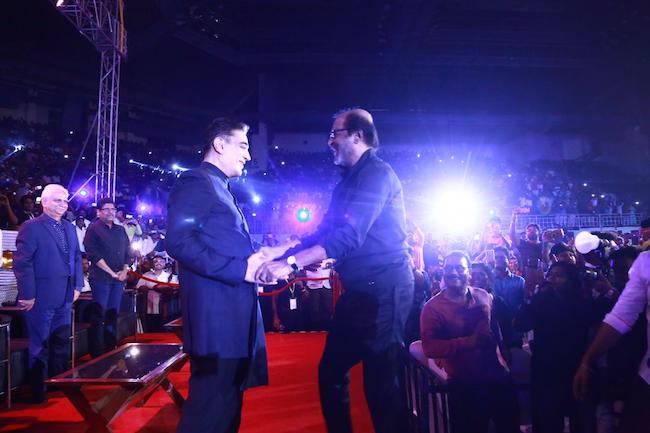 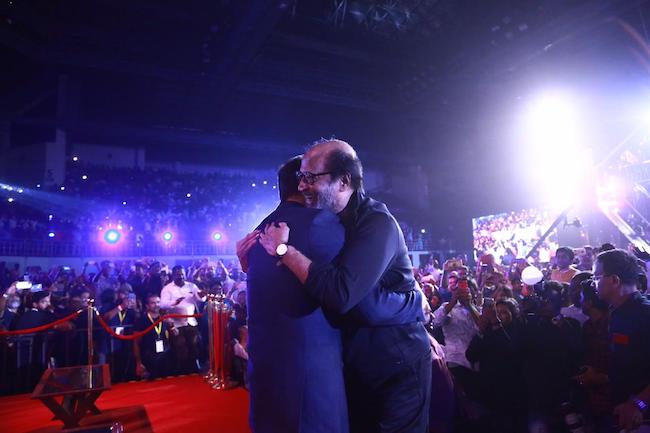 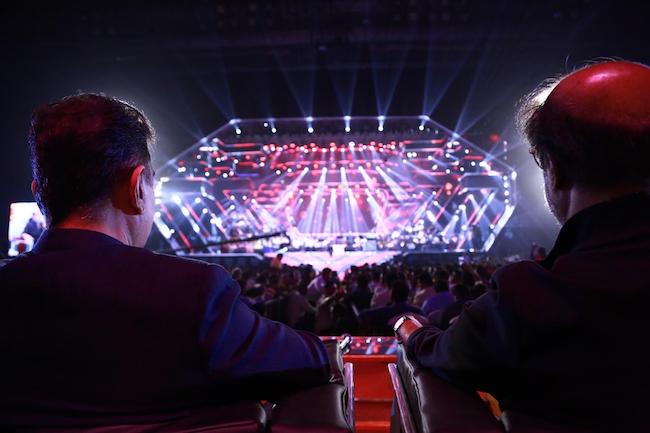 The actor who shares a long friendship with Kamal began by saying that the kind of hardships Kamal has gone through in life, no one might have. “His is from a very reputed family, of well educated, well respected people. Coming from such a family, when Kamal worked in saloons and as dance assistant, one can only imagine the mental stress it may have created for him and in his father’s mind when his family found out,” he said.

Kamal who then came up on stage added to Rajini’s request to fans.

“Everyone should reflect our friendship. Love is the only truth and we will remain it’s identity. We don’t know what future holds. Yesterday and today has given us a beautiful friendship. Our acting styles have been different and so our idealogoes too will be different. We have protected our friendship for 44 years we would continue to do so in future as well,” he said.

Kamal also invited Rajini to present a Rs 1 crore cheque set aside from the funds collected for this event to a skill centre inaugurated at Kamal’s hometown Paramakudi on November 7. The skill centre would be the first of its kind, aimed at helping rural youths better equip themselves and find employment. Kamal also announced that more such skill centres would be inaugurated in future by MNM.

Kamal Haasan received a lot of criticism for inviting Vairamuthu for the special screening of Hey Ram that was held on his birthday. He was not among those present for the event.

Actor Vadivelu who later came up on stage was a laughter riot. Sharing an anecdote from his days in working with Kamal and Shivaji Ganesan in Thevar Magan, Vadivelu had the audience in splits, reminding them once again why he’s the undisputed king of comedy in Tamil. The actor who himself had a brief, unpleasant political stint remarked that Kamal’s political venture was ‘kaalathin kattayam’ (a compulsion of time).

Actor Vijay Sethupathi, when it was his turn to come up on stage made an open request to be a part of Kamal’s next film. “Unfortunately I was not able to be a part of Indian 2,” he said. 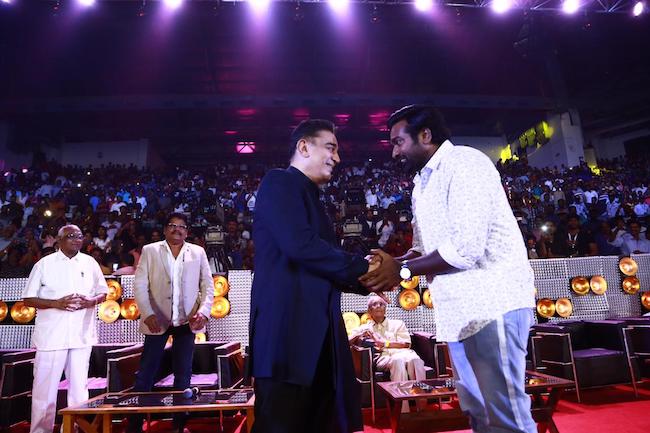 Among those who performed on stage were Kamal’s daughters Shruti Haasan and Akshara Haasan, actor Pooja Kumar and actor Andrea.

Kumbh Mela Festival; Its Not A Celebration But One That Helps Wash Away Your Sins

The largest human gathering in the world is said to take place every 12 years in India. During the 55-day...

The country’s most renowned classical Indian dance guru and the Sutra Dance Foundation will be performing for the first time in...