When we see a vadai, which is sometimes called a medhuvada, our thoughts naturally drift to if there is a steaming hot cup of tea available to go with the delicacy. Cartoonist Lakshman Balaji has a different take on the humble treat. 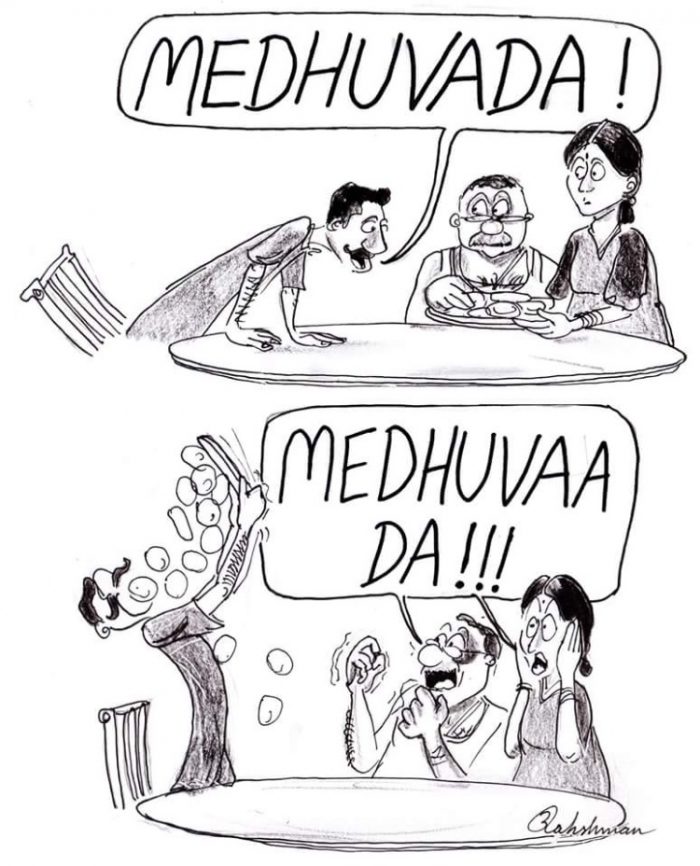 Having 57,000 followers on his Facebook and a whopping 4 million views of his cartoons, Lakshman is a force to be reckoned with. The cartoonist talks to Varnam about his cartoons, his controversies and his trolls.

“I have always been drawing, most of my childhood photographs depict me drawing from a very young age,” Lakshman says that he cannot pin point an age when he began drawing, as a result of it.

Languages may just be his oxygen, while drawing, his skill. “I love word play, and i love languages, I even almost signed up for a Swahili class! It really was was a natural progression for an artist who loves word play to draw comics that portray Tamil puns,” 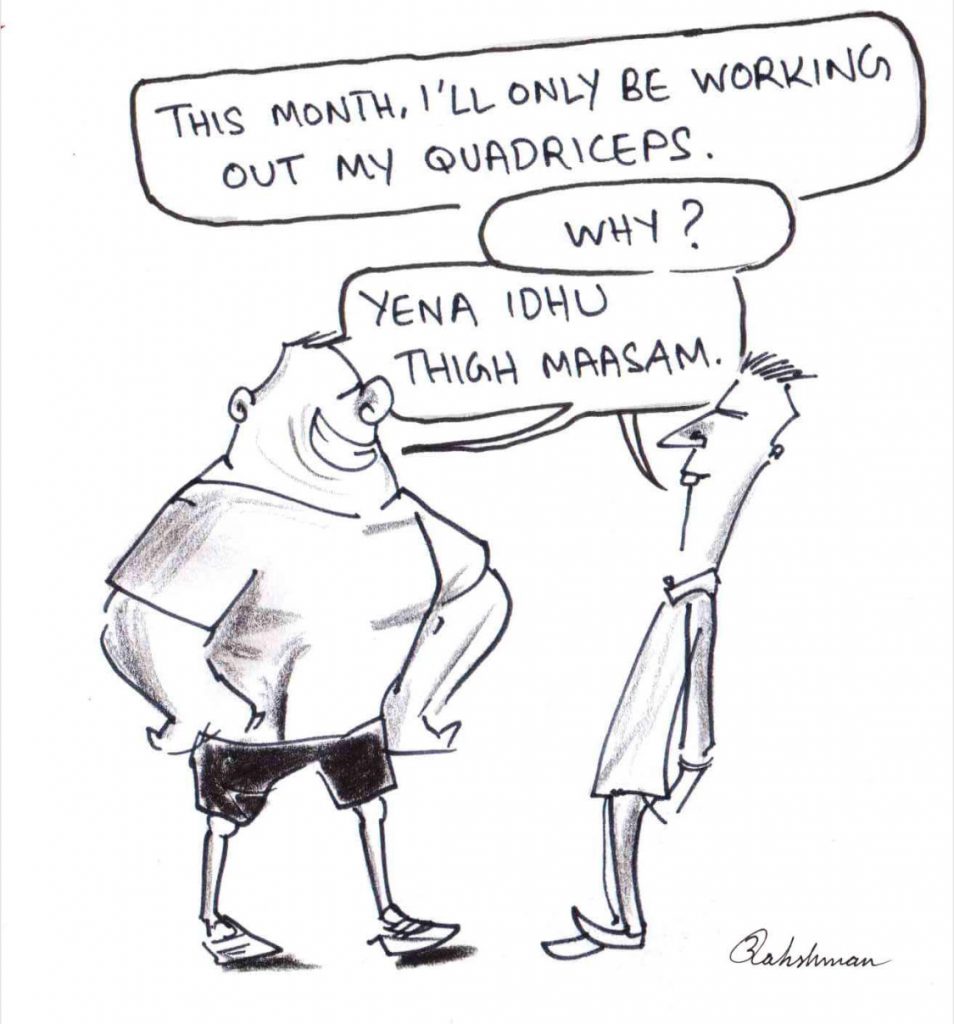 “They started off as witty observations. I then realized that there are so many words in Tamil that i kept misunderstanding, in spite of speaking Tamil at home” Lakshman began drawing these confusing incidents and to his surprise, it was a hit among his friends.

Most of his work are culture-related puns. Lakshman says that this makes it relatable, and he enjoys drawing these. “I usually make witty observations on what is going on in my household. While they sometimes come across as mokkai, people really do enjoy it!” 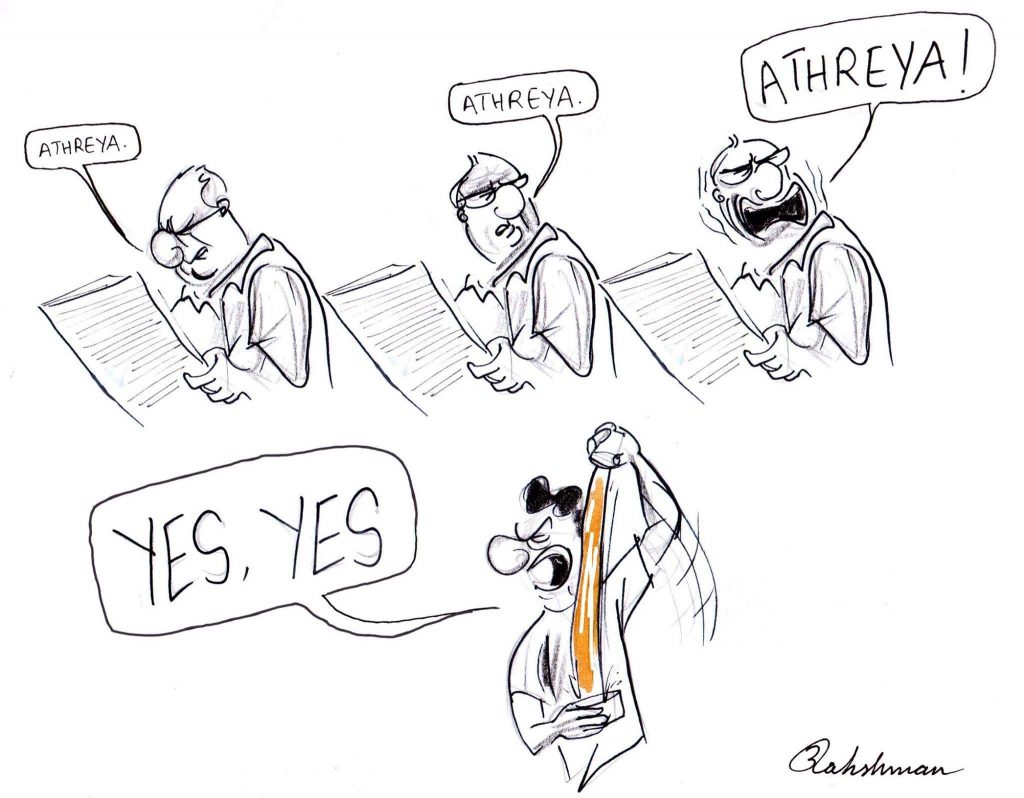 While he does consider himself apolitical, Lakshman has caused quite a furore on social media. A ‘controversial’ cartoon was removed by Facebook on the grounds of being racist. This propelled Lakshman’s Cartoons to an expeditious stardom. “It really was something that was spontaneously drawn, I did not intend to create a social change with it,” Lakshman admits. The range of responses were shocking. “I get why Facebook had to remove it, I could have been a non-Indian poking fun at an entire race, and that’s not right,” The cartoon, however, was liked and even retweeted by Indian politician Shashi Tharoor.

Lakshman also received flak for making fun of actor Suriya’s height, which all began with the comic below. 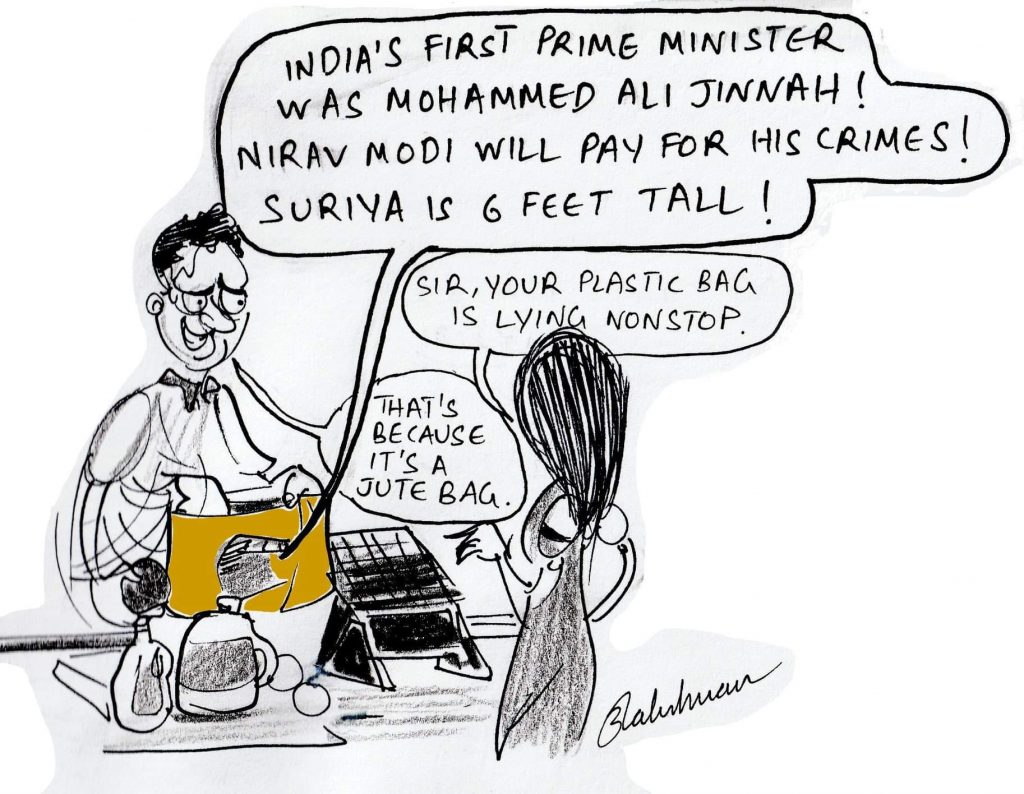 Jute, pronounced joot is the Hindi word for lie. “What pissed me off was that Surya’s height wasn’t the punch line of this comic, it was merely the throwaway line,”

The backlash on Facebook was unmistakable. From accusations of body shaming to personal attacks on Lakshman, people were offended. This made Lakshman livid. “I was so angry that i made subsequent cartoons about Surya’s height, just to irk these ‘hardcore’ fans of his,” he laughs. “The following few comics were just bait to keep people wound up,” 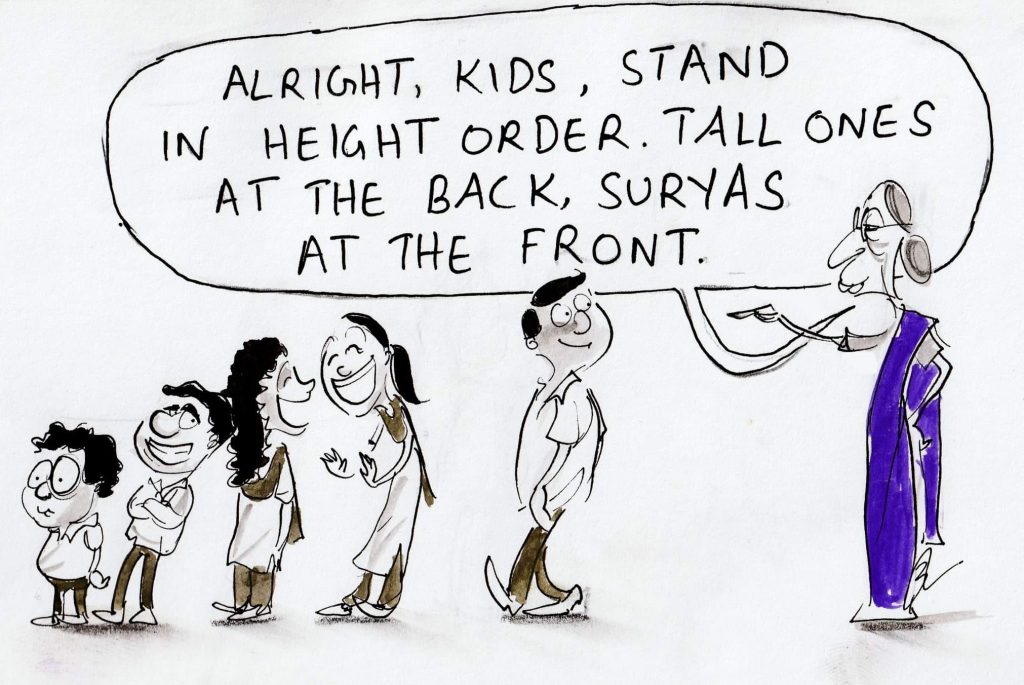 “What people are seeing is literally FREE content, so they don’t get to tell me what they like or dislike,” He does try not to be provocative with his work, “The Surya cartoons were just a very visceral reaction to the vexed audience,”

Punching up is what Lakshman does. “I don’t target marginalized groups with my cartoons. In fact, I always do an internal check before uploading them, the arguments that are about to take place are already in my head,” While Lakshman does try hard not to offend people, he doesn’t let it stifle his creativity. 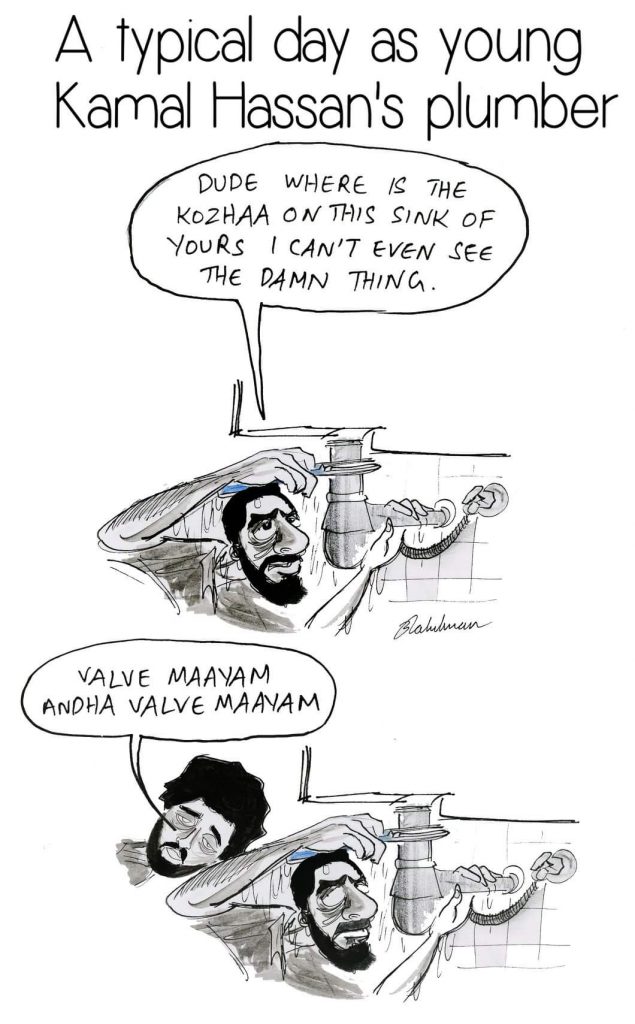 It is important to curate one’s comments, according to Lakshman. “The comments that are offensive, i usually delete or hide them. Ultimately, my page needs to be clean, some of my followers might be younger and I don’t want to expose them to unnecessary elements.”

The Chennai native cartoonist is a realist when it comes to dealing with internet trolls. “You really cannot win a war against an internet troll, both parties always feel like they have won!” Lakshman says that he has resorted to ignoring comments. “I am really not obligated to respond,” he says matter-of-factly. 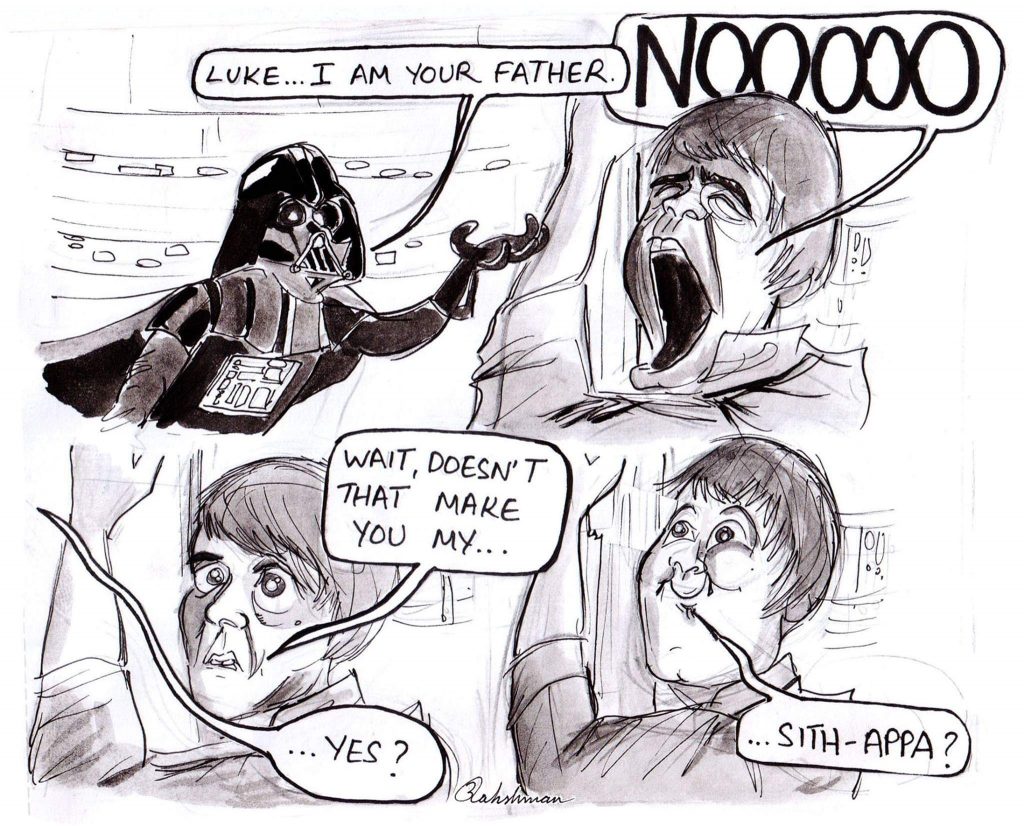 Lakshman feels a responsibility to his followers. “When i started uploading my cartoons onto Facebook, I was doing it on my personal profile. I had 300-400 friends, most of whom knew me in person. I now have a following of 57,000 and I have to be a little more careful with what i put up. So I try to stay away from religious stuff. Hindu mythology is okay as long as it isn’t overly offensive. To be honest, i really don’t know enough about other religions to make cartoons on them.” 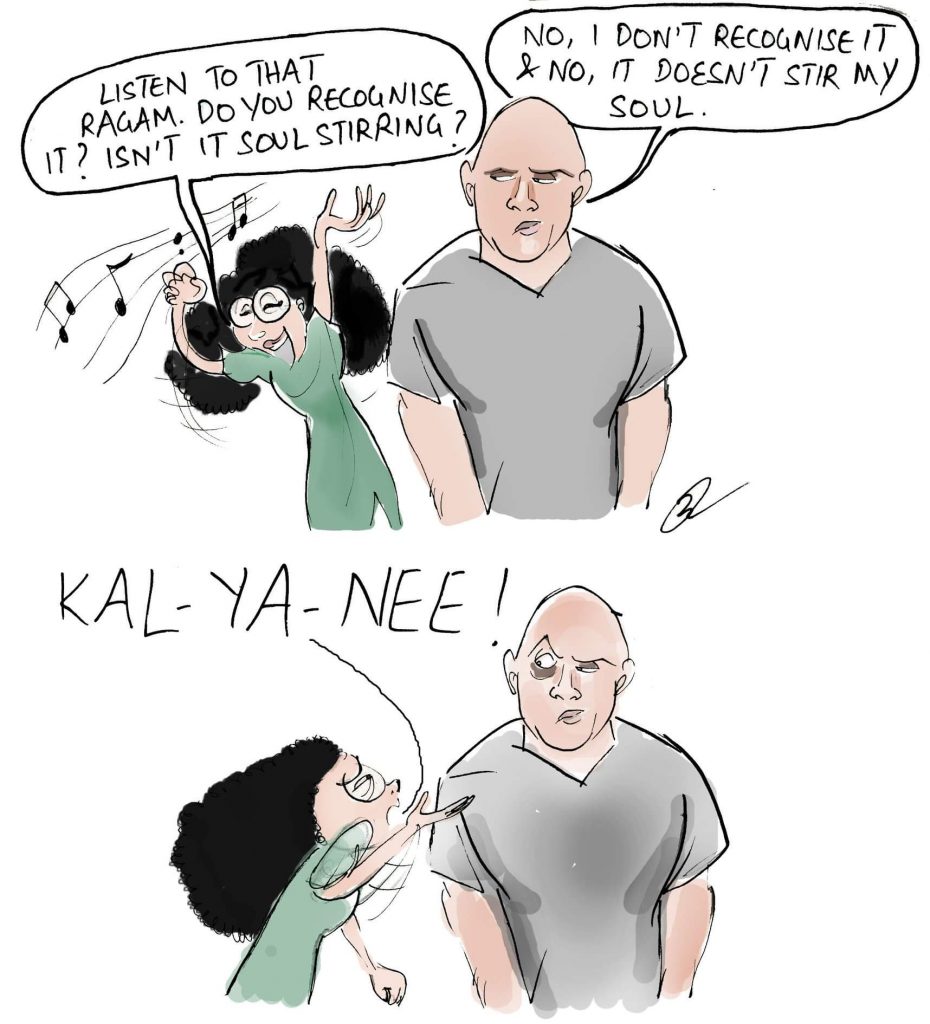 Lakshman also doesn’t see himself expanding his work to cater to a non-Indian audience. “There definitely is a ton of money and fame if I were to expand my material to non Indians. But you know, I enjoy this. I may not know where I am, or what category or cartoonists i fall into, but I am happy here. More importantly, there is no one else who is doing what I do, Tamil-English pun comics,”

Lakshman is a dentist who is currently based in New York, pursuing his higher studies. “I probably won’t switch to being a cartoonist full time. “I am the kind of person who is quelled by boredom if I were to do something full time. So I won’t be doing comics full time. But I do have plans of compiling all my work into a book. There certainly is an audience, and I have more than 300 cartoons thus far, it would be interesting to see where that goes,” 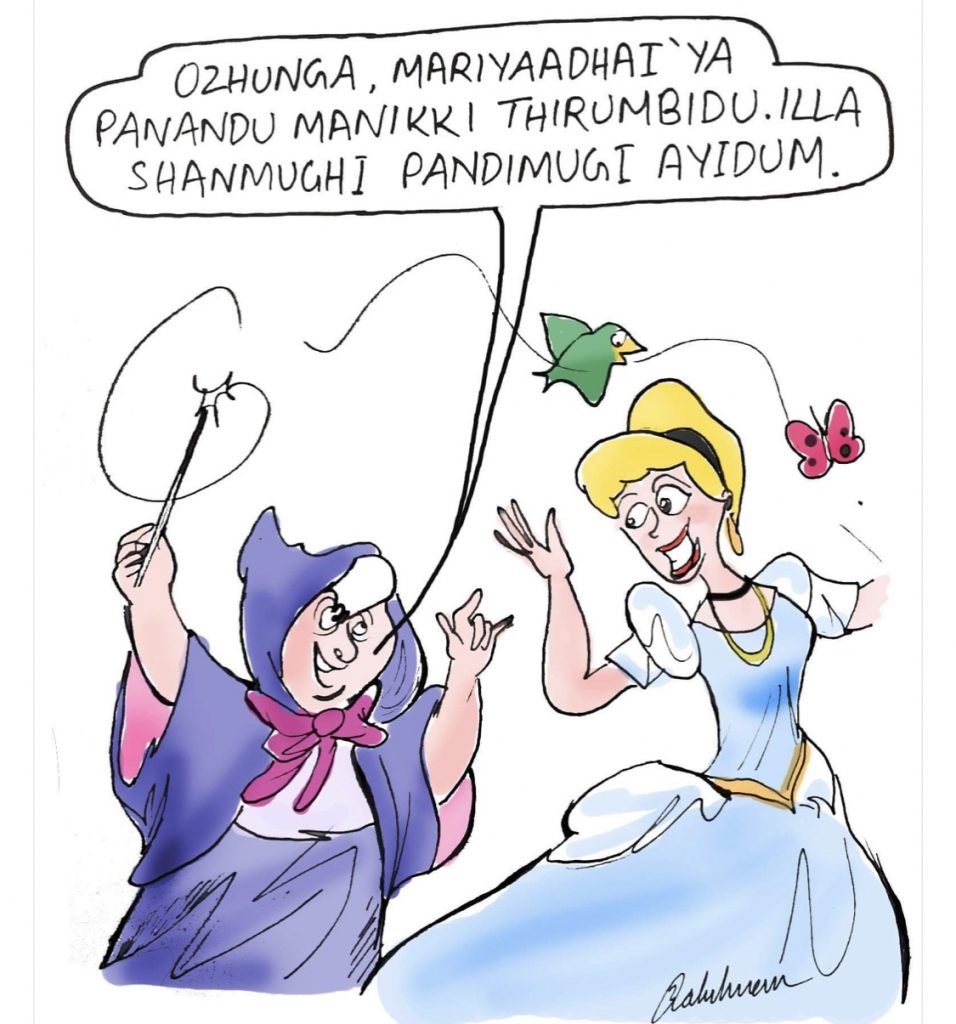 Off late, Lakshman has been uploading his material onto Instagram too. “All content creators on Facebook are constantly bombarded by advertisements every day on how to grow our followers and increase our reach. To be brutally honest, I got this far without money! I have spent zero rupees on advertising. And while the organic reach of Facebook is reducing, as in pages are less likely to show on an individual’s news feed, I have switched to other platforms like Instagram. This is all done so that the content creator will pay!” 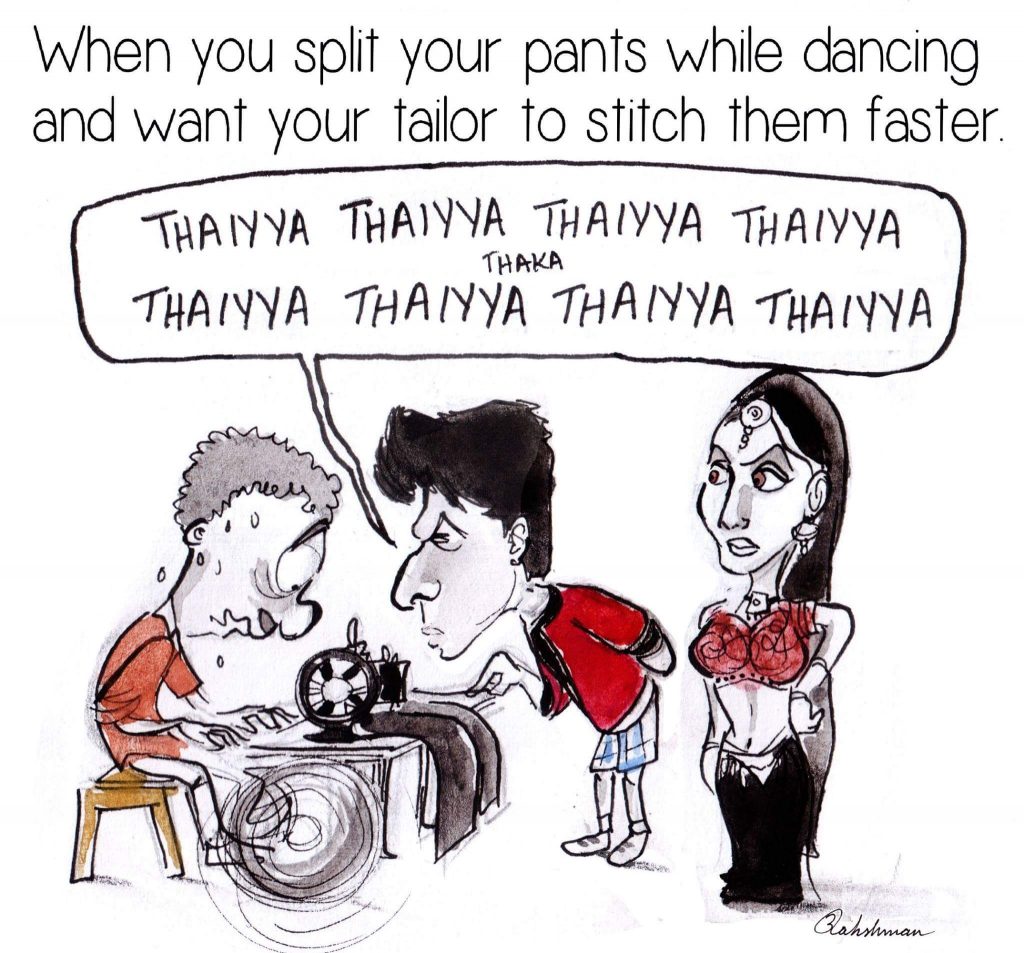 “As much as i love drawing and putting out cartoons, the next few months are going to be a little quiet as I will be in my final semester,”

“I am looking at drawing more caricatures, though!” He is currently taking on commissions to draw real life people. 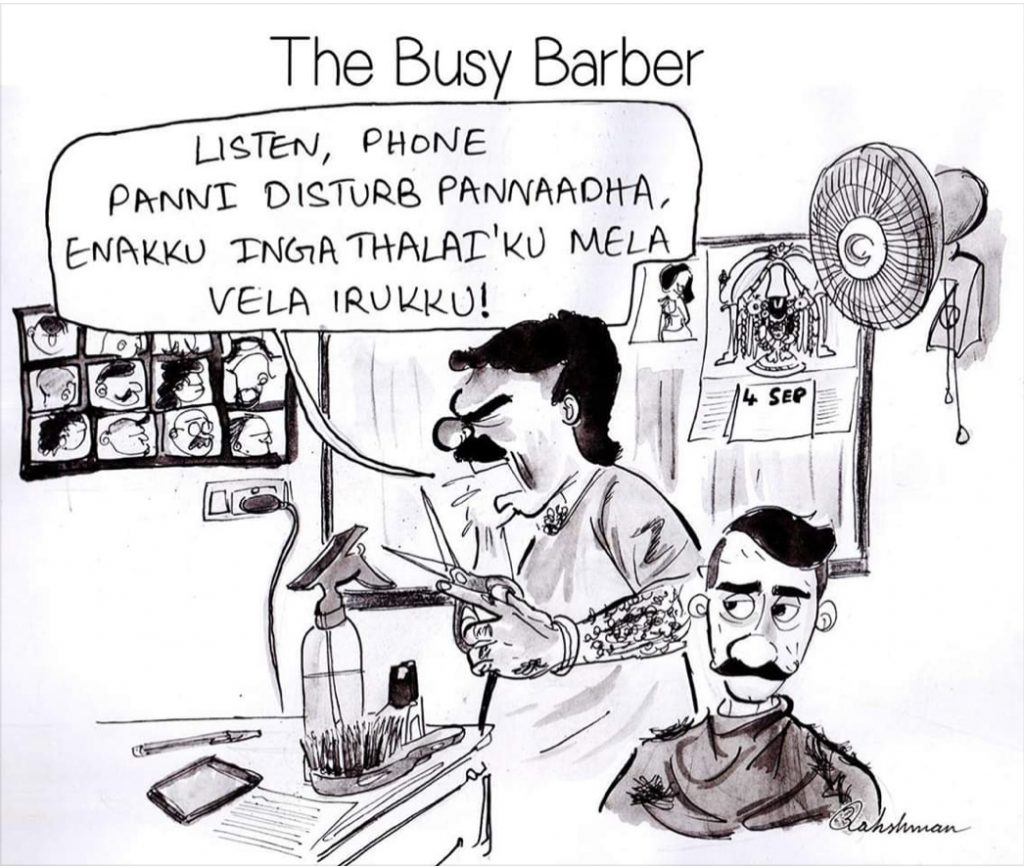 “Ultimately my goal when it comes to Lakshman’s Cartoons remains the same – to make every Tamil-English pun before anyone else does!” 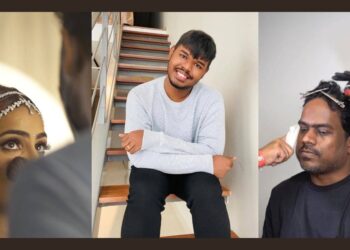