EXCLUSIVE: Sangeeta Krishnasamy Talks About Her Journey In The Film Industry 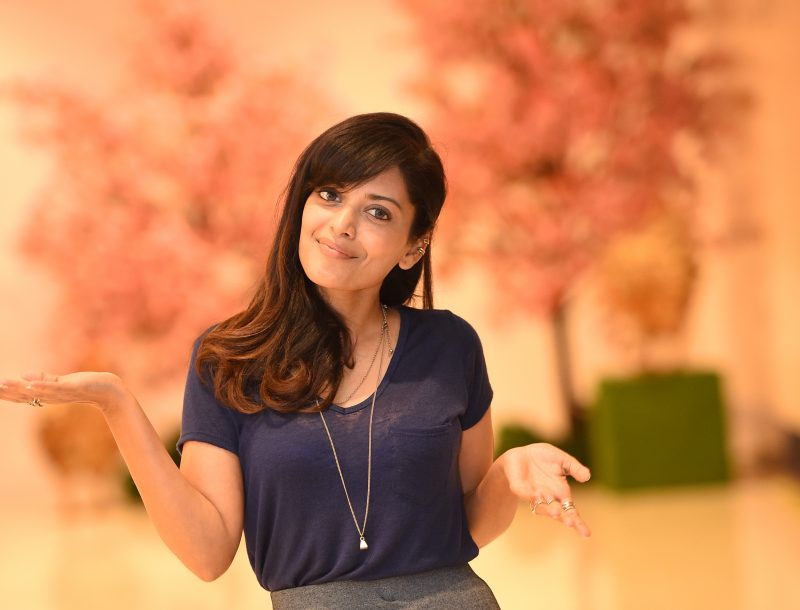 Sangeeta Krishnasamy is perhaps the only Malaysian Indian actresses to make it big on the national platform. Coming from humble beginnings, the Kuala Lumpur lass began her career with local Tamil movies before working on the Malaysian cult classic, Vennira Iravugal. Three years later, she was signed on for the Malaysian film, Adiwiraku. Her successful portrayal of Cikgu Cheryl in the film not only earned her three prestigious awards, but also made her a household name among all Malaysians.

Sangeeta opens up to Varnam about her childhood, her glories, and her unabashed views on Tamil films.

What was your childhood like?
I come from a family of voracious readers. Growing up, I read plenty of books meant for adults. Perhaps that’s why I outgrew my childhood quicker than everyone else. In fact, I was always surrounded by books. A novel I really enjoyed was Audrey Rose by Frank De Felitta. My dad made my siblings and I read Shakespeare and watch plays. He also introduced classic movies to us like My Fair Lady and The Sound Of Music. I guess I grew up watching inspiring movies that shaped my life somehow.

Did you always want to be an actress?
Not at all! I never thought about being an actress, but maybe deep down inside I always wanted to be Audrey Hepburn or Angelina Jolie! My mother was into arts, I suppose I inherited that gene from her!

Being a law graduate who has made the leap into the entertainment industry couldn’t have been easy. Tell us about that.
Oh it was really easy! I didn’t practice law upon graduating, I ventured into the corporate world and ended up in the education industry. Work often weighed me down, and I was looking for an outlet. That’s when I stumbled upon an acting course at Kuala Lumpur Performing Arts Centre. The 10 week theater course was life changing, and the rest is history! None of it was planned, to be honest.

You are one of the few Malaysian Tamil actresses who have crossed over into the Malaysian market. Was that an easy transition?
I think the most important thing is to remember that we are Malaysian first, before anything else. And I keep saying this, it is so important to master languages in today’s world, especially English. In addition to that, honesty, focus and hard work will get you places. It may not be today, but it will get you there someday.

Tell us about your Adiwiraku experience.
Adiwiraku was more of a life we lived than a film we recorded. The time the crew spent together making the film taught us humility, righteousness and compassion. I really hope to get more scripts like that, because these are the movies that empower children, and society as a whole. We all still keep in touch, in fact. 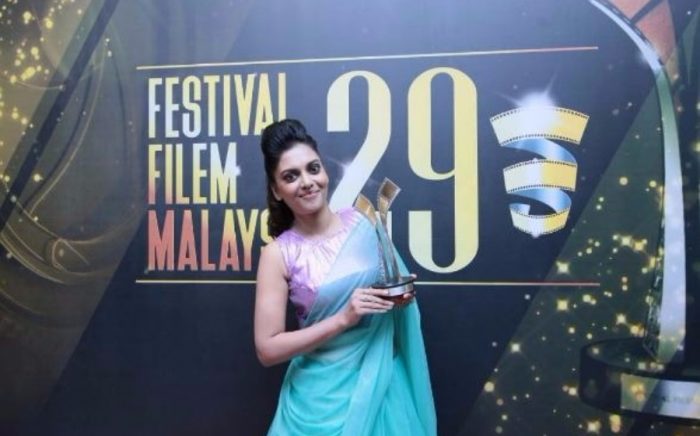 Sangeeta’s performance in Adiwiraku won her the Best Actress award in the Festival Filem Malaysia 2017, Anugerah Skrin 2017 and The Kuala Lumpur Film Critics Award 2017, making her first actress to win all three awards in the same year.

How did you feel when your name was announced as best actress at the Festival Filem Malaysia in 2017?
Believe me, I’m STILL shocked. I knew in my heart that we would win best movie, because it is a story that needed to be told. For the children of SMK Pinang Tunggal, it would mean the world to them, and it will be the greatest appreciation to all the teachers out there.

Little did I expect to win best actress and to receive that kind of honour. I mean, I was nominated alongside some really talented ladies. It still gives me the chills thinking about that night! 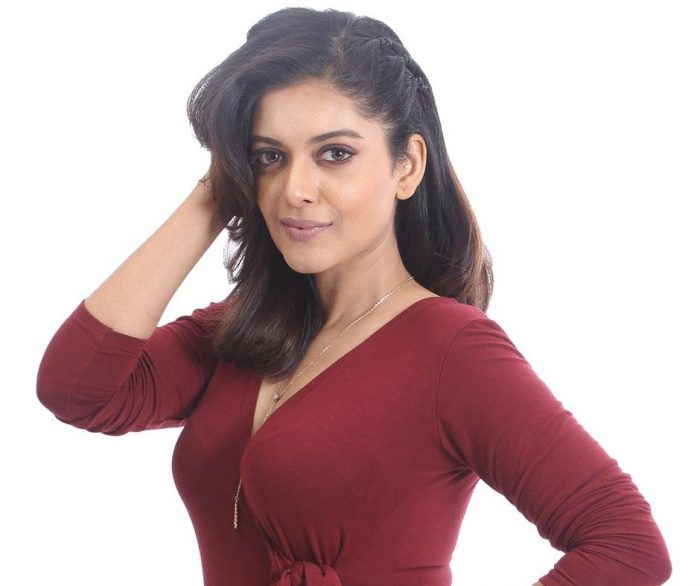 Does that mean you see yourself headed in that direction?
Eventually, i see myself writing screenplays, one of my true passions. Thanks to the National Film Development Corporation of Malaysia (FINAS), I’ll be heading to the New York Film Academy this year to embark on a course in acting and screenwriting. My dream is to make exceptional Malaysian movies that the world would watch. I really want to put our talent on the map internationally. 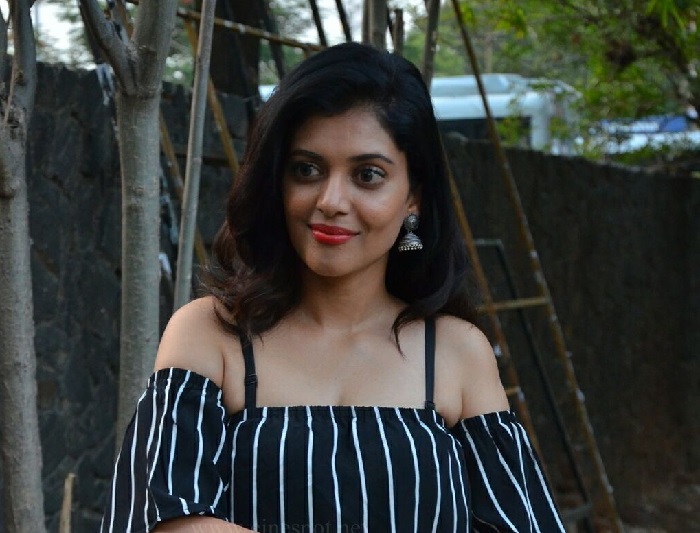 Women are represented as mere dolls in most mainstream Tamil movies, with misogyny still ruling the screens. What are your thoughts on this, and what can actresses do to fight this?
I’m going to be brutally honest here. Mainstream Tamil films from India are a very bad influence on our children and youth.

It’s not enterprising nor inspiring when a bad boy is hero-worshiped and women are treated as mere accessories to add colour to these movies. Statistics show how closely connected social ills are to mainstream Tamil films in this country. Anyone who says otherwise is in a state of denial.

Movies to me are a reflection of a society and what it represents. Female empowerment is something that needs to be addressed in the Indian society. This needs to start with how women are portrayed in movies, only then things will change.

We Malaysian Indians have been brought up in a society that keeps telling women what to do and how to live their lives. What is your advice to young girls out there struggling with this?
Prove yourself, that is the only way to change society’s mindset. Then teach your children the same. Find ways to empower yourselves every day, and read plenty. Look up to inspiring women and learn how they got to where they are. My personal favourite is Michelle Obama.

Really, education is empowerment. Prioritize your education and nobody can tell you what to do.

It is no secret that you have done plenty of volunteer work, and you’re an environmentalist. Tell us a little about that.
Well, I really owe it to my family. My dad loved animals and the environment. My family was always front and center when there was a charity event or animal rescue drive. I suppose I grew up understanding my responsibilities to our planet. My dad would always pick up litter and bin it. He taught us to do the same.

My childhood weekends would usually be spent outdoors, climbing trees. That’s where i found my love of animals, and I even studied the life of ants and birds. So five years ago, I made a decision to turn vegan.

What’s next for Sangeeta Krishnasamy?
This is a question I never fail to ask myself! This year, I’m working on making school kids understand the importance of English, and how they’ll be limiting themselves access to knowledge if they don’t master the language.

Frankly, I’m more of a be-happy-and-go-with-the-flow kind of person. Sometimes i feel like over-planning my life can work against me. And it is always nice to be free and do what makes me happy. I like not knowing what’s in store sometimes because it makes life interesting. So let’s see what the universe has in store for me this 2019!