EXCLUSIVE: “I Want To Bring Malaysian Content To The World,” – Sandosh Kesavan 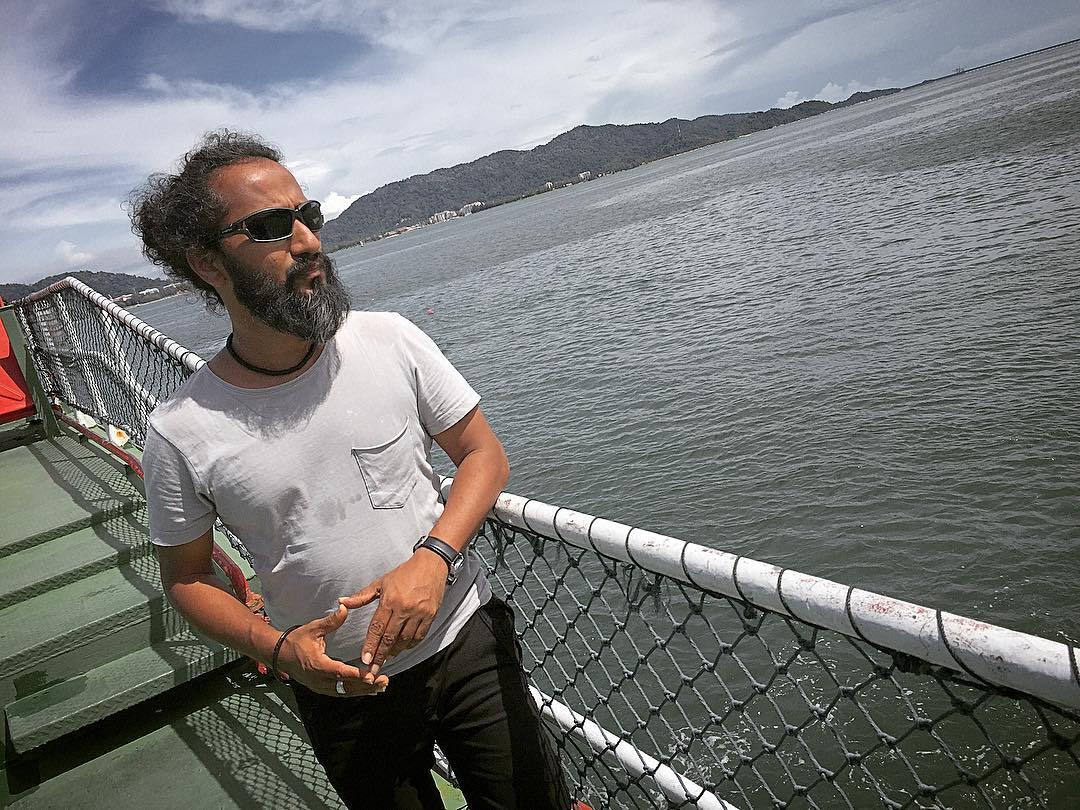 Picture this. You are a first year engineering student. You’ve just received a full scholarship to complete your degree. But engineering isn’t your first love. Filmmaking is. The Akademi Filem Malaysia has offered you a seat for a degree where your heart lies. Which path do you choose?

Sandosh sits down with Varnam to talk to us about his love affair with films, Felina, and bringing Malaysian films to the international stage 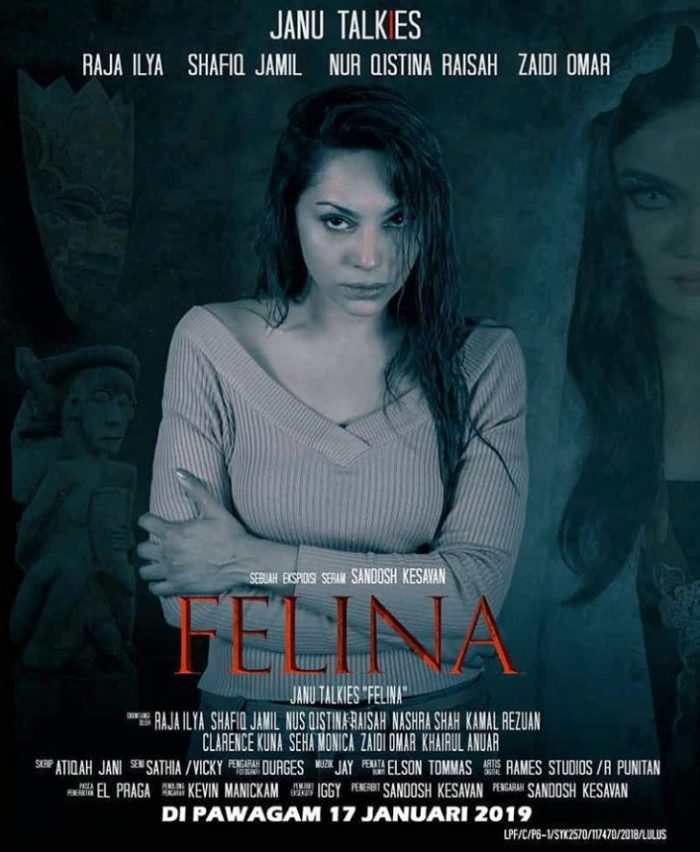 Congratulations on Felina! But we hear that a shorter version of Felina has hit the screens before..

You know, Felina was actually my first film. Back when I was in my second year of studies in the Akademi Filem Malaysia, we were given the opportunity to direct our first independent movie in video format. I picked the horror genre. Felina was born. The film won me a few awards, and gained me recognition back then.

25 years later, here I am, releasing a full length feature film in the cinema, retaining some footage that was shot back then. So it’s a very nostalgic project for me.

The response for Felina has been good. You must be ecstatic.

To be completely honest, the response on social media has been mixed. But as with any product you put out to the market, there will be critique. There will be the good and bad reviews.

Does this bother you?

No, because I know that it is impossible to justify my work to these people. Their sole purpose is to criticize and berate the film, so I just take it in stride and move on, doing my best with each film.

True. But when you have been in this industry for 25 years, one would have seen so many ups and downs, and have faced some really brutal, unfounded criticism. Sometimes even targeting my race, which is completely irrelevant! I just don’t see the need to fight with them or engage them. My silence will make them the biggest fools. And honestly, i just focus on my work and doing my best at that.

You’ve stated that your father is the reason you are where you are. Tell us about that.

My dad was a medical assistant in the Raja Musa Estate in Kuala Selangor. I owe my success to him. My father told me to follow my dream when i was pursuing engineering. He told me to forgo the scholarship and pursue filmmaking.

Of course, my relatives didn’t understand it at first. Some even joked to ask if I will be recording wedding videos. It was when they saw my name appear on television that they realized this could be an actual career. I worked with Astro for a while. Then in 1998 the economic crisis occurred and i found myself retrenched. I began work on my first independent movie. And a mere two days before filming was to begin, a funder pulled out. I was devastated. That’s when I left for India and worked there for 6 months. I even work on Prabhu Deva’s Time as the assistant cameraman.

I had the experience but still wasn’t financially stable. I then freelanced briefly before working with Astro once again, until i couldn’t take it. I resigned from Astro and told my boss, “I’m going to chase my dream,” My father was again, my pillar of strength, and encouraged my then risky move. Then I established my company, Janu Talkies, in 2003

Ah, Janu Talkies was the production house behind Aandal!

(Aandal is one of the most successful Malaysian Tamil films to have graced our screens. Released in 2004, the film tells the story of a poverty stricken estate girl, Aandal, who escapes to the city with her boyfriend, only to find herself entangled with drugs and prostitution. It was based on a true story. Aandal sold the highest number of VCDs in Malaysia and Singapore, among local Tamil movies.)

Oh, Aandal is my baby. It was a very honest, sincere heartfelt project that i worked on. It was a time that I had been pushed aside from the commercial side and the business side of this industry. It is really a special movie to me.

And what is your core business today?

We currently work on cinema releases, broadcast releases, corporate content, OTT businesses and the likes. I really like working on hard hitting stories, content that can appeal across races and nationalities. Human stories. Right now, we are in talks for a project that can reflect two thirds of the world’s population. That is the kind of reach i want.

Is the Malaysian government really supportive of the arts, especially films?

Without a doubt. I am a product of it! I believe that the claims of lack of support come from a group of people who are unqualified and have not studied what is being offered in the first place. It is easy to say “There is no support,” without even trying. I have seen people without a company nor a proposal, blame the government for not being supportive. Come on lah! Of course it is going to look bleak if you don’t do your homework and don’t meet the right person. 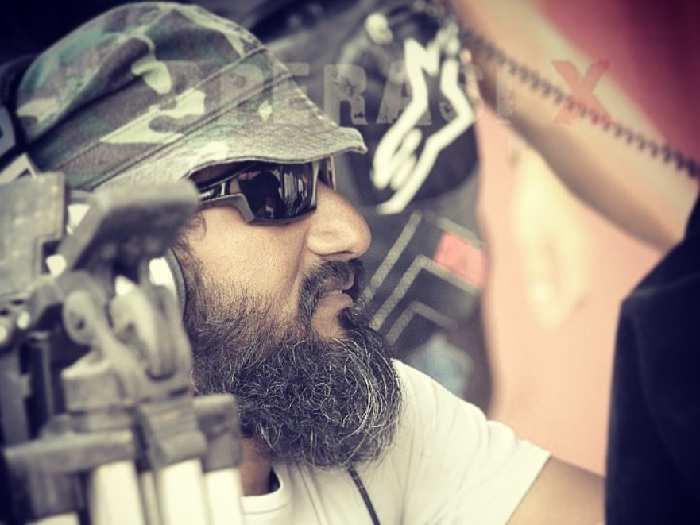 Some claim that the large corporations are not supportive either.

There was a movement to boycott a certain local Tamil channel recently. But these people just don’t understand how large corporations like these work. They have their in-house production budgets, which they need to adhere to. People aren’t looking to make your life difficult, if you just did some research, you will see it. I am lobbying to create more Indian content too, but the business-wise it has to be viable.

Do our Malaysian Indians have what it takes to excel in films?

Definitely! We are overflowing with talent here, but there is one problem. Most of our artists have day jobs and they need to take leave or plan shoots after work for this reason. Of course, it is hard to give up that financial security and to dedicate yourself to films full time. So it is important to decide which would you want to be a part of.

If you choose the arts, learn to diversify your talent. Be intelligent about it. There are quite a few artists who are actors, models, social media influencers, voice over artistes and even translators and they make it work.

Is there a monopoly in the Malaysian Tamil entertainment industry?

I understand why some quarters can perceive there to be a monopoly. There really isn’t! Anyone can enter, but they need to have the sustainability. Sustaining power is so important. And really, there is no need to react to detractors who attack you personally. It hasn’t stopped me! 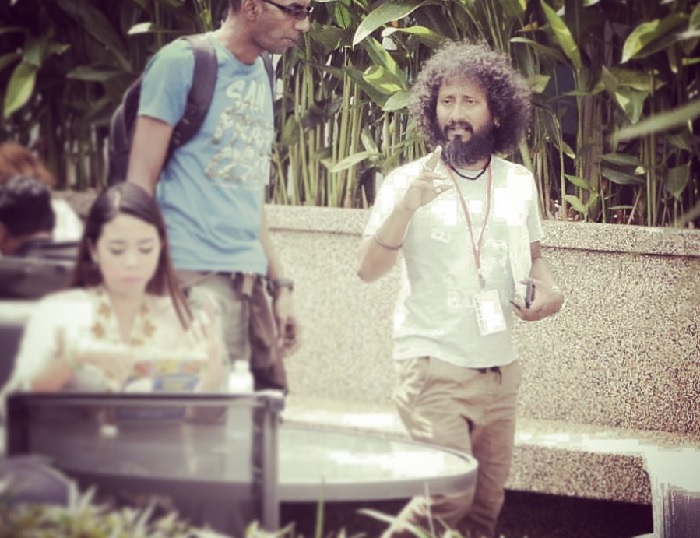 What are your thoughts on social media, a boon or a bane?

Social media is important. I personally use it as a tool to scout for new talent. But just like any other tool, it can be dangerous when not used well or overused. Some aspiring artists end up being swept away with social media, that isn’t very smart.

Any advice to the aspiring actors and filmmakers?

Be professional, identify your talents, figure out what you want to be known for, and make a decision on where you stand.

The cinema industry in Malaysia is unlike that of India or Hong Kong or Hollywood. Learn how to make money as a freelancer in this industry, there is so much information out there. Get the basic knowledge of how banks, companies, income tax, and things like that work when it comes to creating a good credit history and loan acquisition.

Learn the ropes of the industry. Half our Malaysian actors are not even on IMDB! They know what’s the latest with 1MDB, but not IMDB! Understand how IMDB works, and how it is an excellent networking tool. 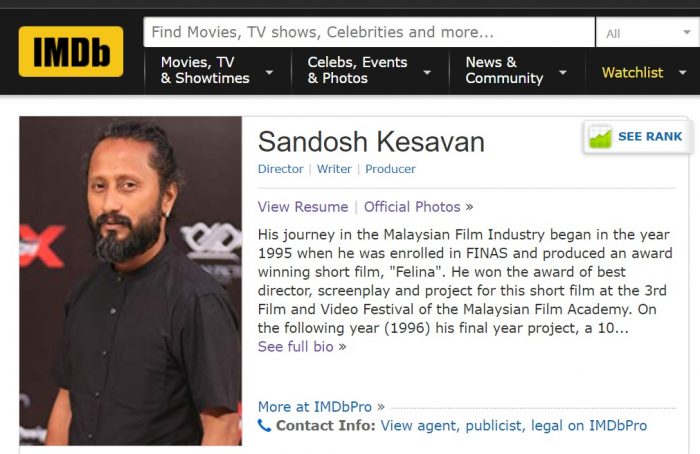 Network. I used to visit pubs in hotels to have a drink, and that’s where i did my networking and acquired corporate clients. Being a filmmaker is a really good ice breaker!

Talk to people, those in the industry, financial people, chat them up. The key is really to be a good listener and to absorb what is being said. Talk less, listen and then do you homework. Arm yourself with the knowledge of the industry by talking to people.

Don’t be afraid to do work below your level of expertise. I have even worked with Oliver Stone! (Oliver Stone is a famed Hollywood director, award winning films like Nixon, JFK and Platoon) He was in Malaysia to shoot a commercial. I took on the role of video operator for the shoot, and got to know him. We became very good friends.

Whats next from Sandosh Kesavan?

I am currently working on the pre-production for my next Malay movie. I am also in talks with an OTT carrier about a project to be aired there. In addition to that, my company is working on a film with regards to the plight of the Srilankan Tamils. We also have an ongoing contract with RTM. What is your dream, Sandosh?

I want Malaysian content and projects to reach an international level.

I have always wanted to make a movie on the Kangani System and how the British brought the Indian labourers to Malaya. In fact, I have started work on that with a professor who did her research paper on the topic.

This might be a little sensitive, but I would also like to do a film on the murder of Jean Perera Sinnappa. I followed the developments of the case very closely, and amassed a huge amount of news paper articles and information on it. I really want to do this, but I know it has to be done properly. We are talking about a movie, documentary, perhaps even a novel!

People who know me will tell you that I never boast about my work. I just do my job with passion and stay honest in my interactions. It has paid off.

Santosh’s complete biography is on IMDB, click here to have a read. He is also on Instagram, @sandoshkesavan.

Felina is currently screening in cinemas nationwide. Check out the showtimes here.