Thashan sets the Malaysia Book of Records for solving a 3x3 cube in two minutes and a 2x2 cube in fifty seconds. 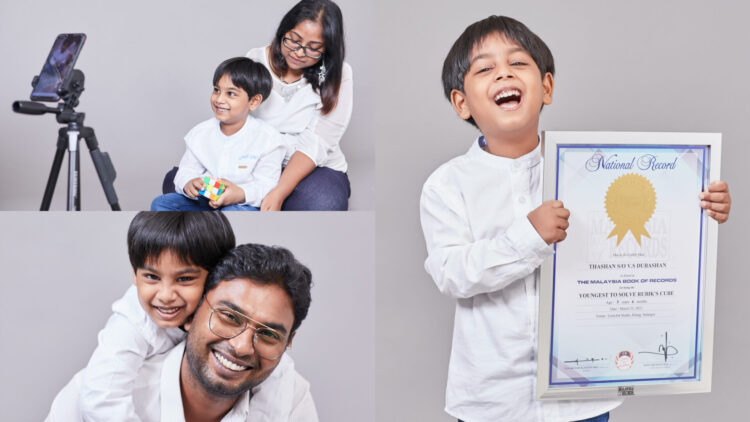 Many of us are probably familiar by now with a story of a little boy who solved a Rubik’s cube in just two minutes. As simple as it may sound, solving a cube is a challenging task.

Children have set a variety of records over the years, ranging from single-time solving to solving with the fewest moves in a cube. Thashan, on the other hand, was able to solve a 3×3 cube in two minutes and a 2×2 cube in fifty seconds.

He is now the youngest record holder to solve the Rubik’s Cube, earning himself a spot in the Malaysia Book of Records 2021. ​​Varnam Malaysia had the pleasure of interviewing Thashan’s parents, Hashaa Devi, a housewife, and V.S Dubashan, an architect. Without further ado, let us begin with what they have told us about their gifted child and his accomplishments.

Varnam: How did you first notice that your child had the potential to solve the Rubik’s cube?

H&D: Thashan’s mother always used to solve the rubik’s cube since Thashan was 4 years old. And at the age of 5 and a half,  under his own interest to try, he aimed to solve it too. Once he trained for 8 days, Thashan caught up and fully solved the cube on his own, which took him only 2 minutes.

It gave us a huge shock in the first place once he solved it, remembering all the algorithms and patterns which are way complicated even for adults. Thashan uses the basic algorithm which is very complicated and does not use the speedcuber shortcuts to solve the cube. There are more than 43 quintillion algorithms to scramble a rubik’s cube and it all depends on the solver’s brain to solve it.

This made us wonder and search if there is a youngest cube solver in our country, however, we came across a few in other countries such as India, China, Japan, Korea, and France. While checking the world ranking for the youngest cuber, we also found out that Thashan ranks 8th in the world. 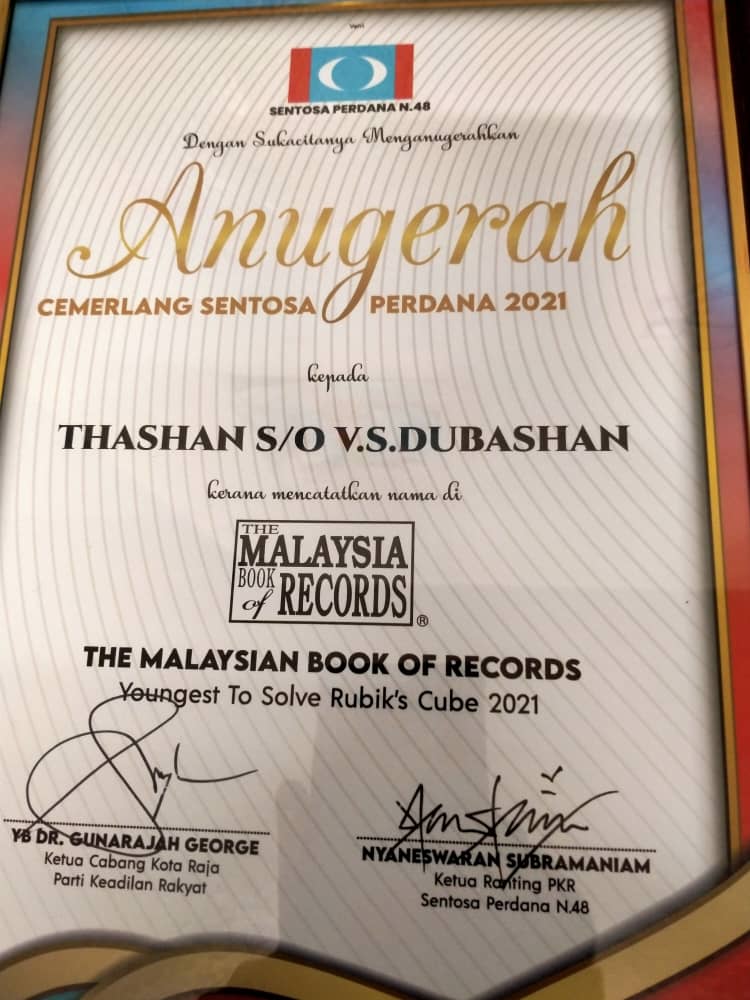 Varnam: Has Thashan been a quick learner since he was a toddler, or has he prospered from any special parental magic from you both?

H&D: Yes, Thashan seems to be a very quick learner since he was a toddler although he only started speaking around the age of 3. No special parental magic but Thashan spent all of his time only with us since his mother is a housewife and I’m a freelancer working from home. He was also mostly homeschooled even before the pandemic began.

Varnam: What was your first move after noticing his potential?

H&D: Our first move upon noticing his cubing potential was, we contacted The Malaysia Book of Records team and after some time they confirmed that Thashan is eligible to break the record since Malaysia has yet to find her youngest rubik’s cube solver yet.

Thashan broke the National Record on 23rd March 2021. He performed live in front of The Malaysia Book of Records team and the boy was also judged by Malaysia’s fastest cuber record holder, Muhammad Hariz Azizan.

Varnam: Who has been guiding Thashan towards his goal of having his name inscribed in the Malaysia Book of Records?

H&D: Only both of us as parents, was guiding him towards his goal of having his name inscribed in the Malaysia Book of Records. Mostly by the mother who instilled cubing in him, myself the father is still unable to solve the cube till today and I’m still proud to say so, because at least my son solved it. 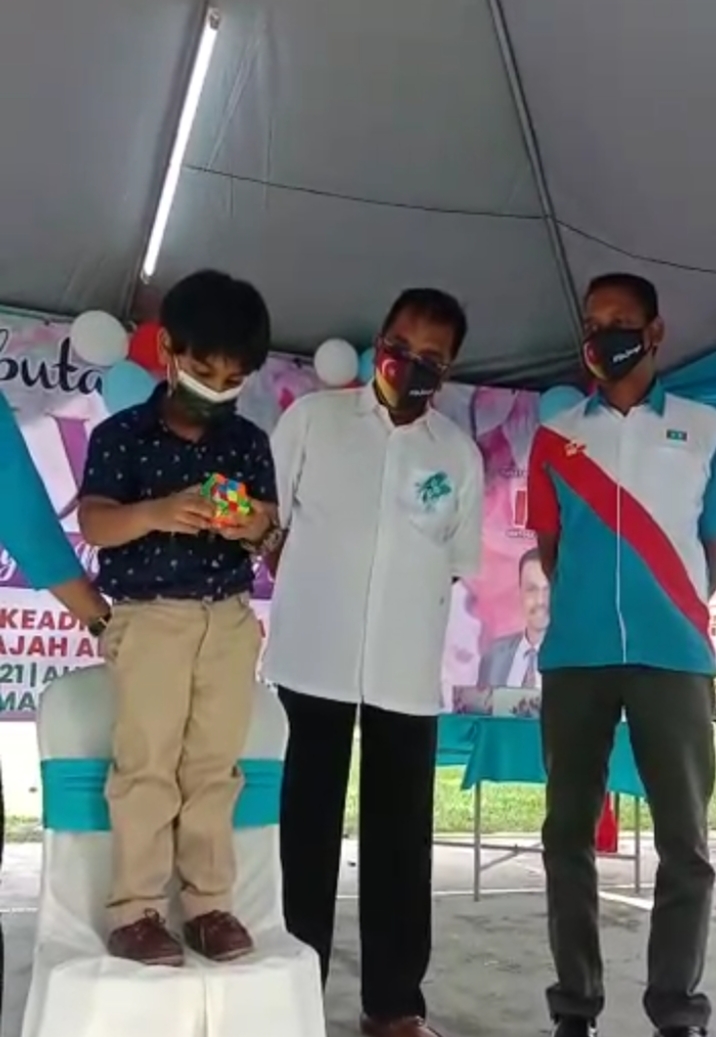 Varnam: Is there anything else he is good at besides solving the Rubik’s cube?

H&D: Thashan is also very good at chess despite his young age, has keen interest in music, guitar, singing, football, and writing his own songs and stories. An all rounder as we have seen.

Varnam: What two words would you use to describe Thashan and why?

H&D: Two words to describe Thashan is ‘Indigo Child’. Most things that he says and does are very soulful , which also made us wonder if he could be an indigo child. He seems to be a quick thinker and responds way quick beyond his age too, more to a 10-year-old.

Varnam: How do you parent Tharshan, a quick learner with a possible high IQ too? Is there a special way to do it as he understands things a little faster?

H&D: It’s quite tricky to convince him most of the time, since he seems to know and ask many logical questions if we try to trick him into something. Thashan asks a lot of questions, seems to understand science well and could elaborate specifically what he has learned without seeing any notes while adding his own hypothesis. 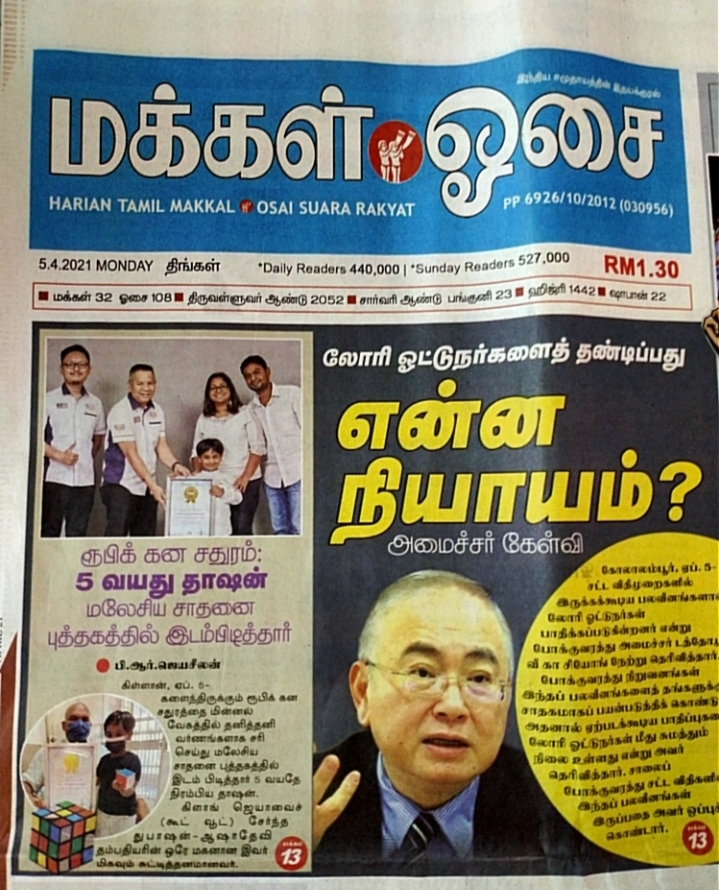 Varnam: Are you preparing your child for the next level of solving the Rubik’s cube? If yes, how’s the journey going?

H&D: Next level of solving rubik’s cube, we leave it to his interest as always. Thashan is also learning to solve 4×4 and 5×5 cube. We will be there to support him for his future Guinness World Records. Thashan has also bagged Anugerah Cemerlang Sentosa Perdana 2021 from YB Dr Gunarajah George, Ketua Cabang Kota Raja PKR, and was featured in the Makkal Osai newspaper.

Varnam: Was there a need for Thashan to be in a more productive learning environment to accommodate his talent?

H&D: The need for a productive learning environment to accommodate Thashan’s talent is a yes. He helps us in gardening, helps out with house chores, plays with his toys and shouts like a regular kid. But spends most of his time only with us parents. There was no involvement of grandparents or babysitters throughout his journey.

Varnam: What are your future plans for your child? In the meantime, are you all working on anything?

Thashan always says that he aims to be an astronaut who is also a doctor, police officer and also a musician. You see guys, it’s quite complicated to explain but he is confident that it is possible. Hence, we leave it to Thashan to become what he wants. 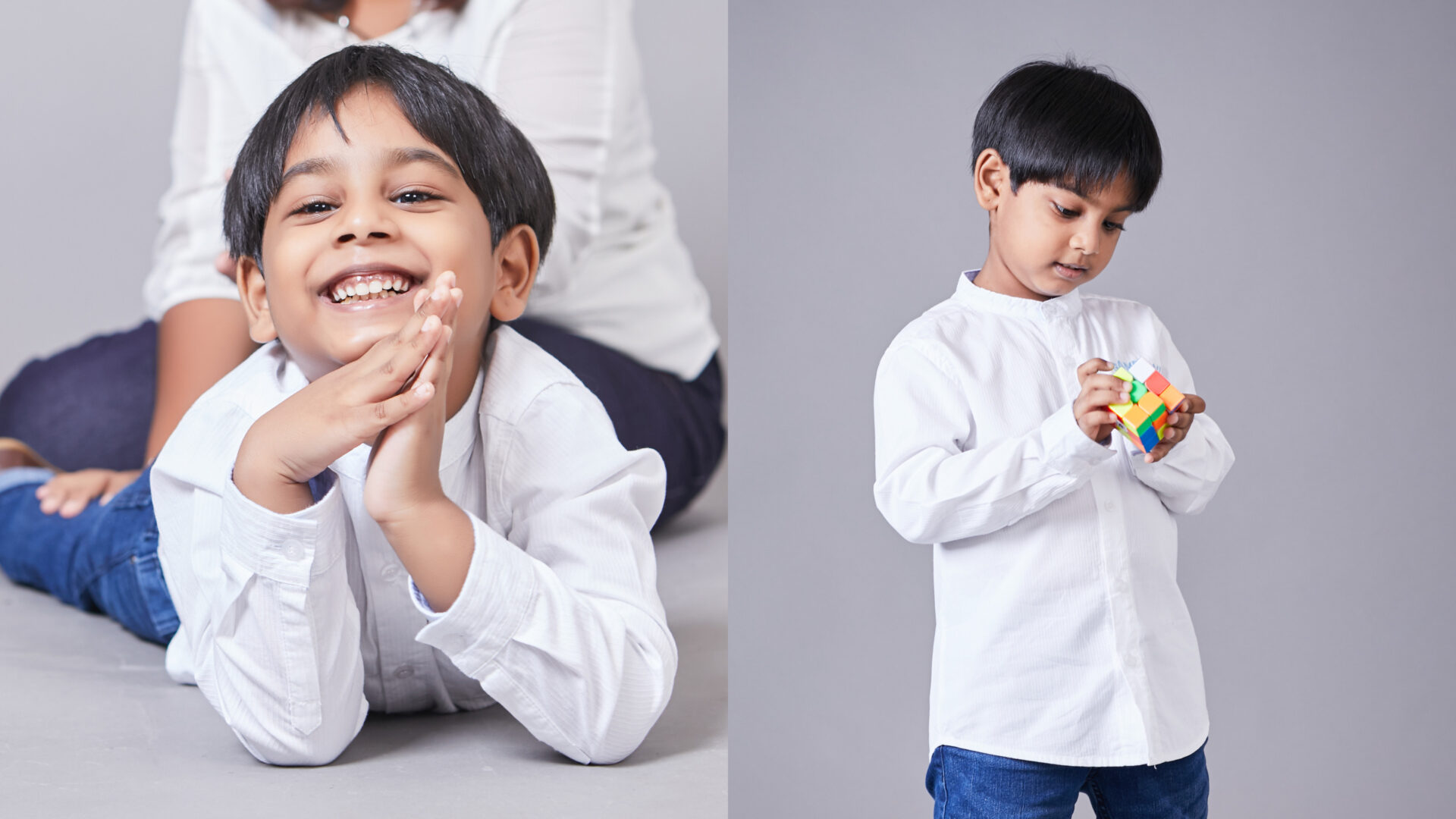 Sometimes, children like this flourish with the assistance of their parents, and in this case, I would say that Thashan is indeed fortunate to have such supportive parents who guide him through the potential success that he can achieve.

But only when they are taught to believe that they are more than what they do on their gadgets, will they be able to solve problems from rubik’s cube to life – just like Thashan. And it all begins with good parenting!

Hats off to Hashaa Devi and V.S Dubashan for ensuring their child’s spot in the Malaysia Books of Records.