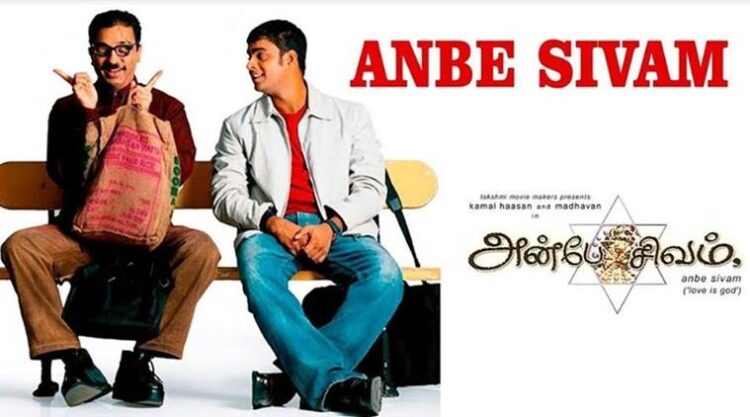 Do you recall when Ayirathil Oruvan was released in theaters in 2010? The Tamil audience rated it as an average movie. However, 10 years later, many consider this movie to be one of Selvaraghavan’s masterpieces. For many moviegoers, this film provides a strong foundation for a great story. Not just this film, but there are also a plethora of other movies that received little attention when they were first released.

Those movies that were initially a flop when they were premiered in theaters gradually gained popularity. Anbe Sivam, a lovely comedy-drama starring the popular and respected Ulaganayagan Kamal Haasan and Madhavan, is one of them, not to forget that the film was written by Kamal Haasan himself.

Sundar.C directed this movie, which I believe was his last movie with a contemplative genre. Many people see this film as a work of art and have wondered why he did not make another film with a social meaning, such as Anbe Sivam. His sole response was, “More than recognition, I just saw loss when I did Anbe Sivam.”

Now that people have seen this movie on the internet, it has gotten greater exposure and has finally solidified its place in the eyes of the audiences.But why did this film not receive due acclaim when it was released 19 years ago? That’s a question for the folks out there to answer.

To further this movie, I believe it has impacted hearts, at least now, because of the lessons that may be drawn from its storyline;

1. Incorporating humour in our life may make things so much simpler, so have a hearty giggle.

Those who have seen the film will absolutely understand. In the flashback, Nallasivam (Kamal Haasan) is shown as a straightforward and strong figure. He had adversaries, which made his life perilous. However, following the accident, he became absolutely imperturbable. He embraced comedy as a defensive mechanism, which made most of his conversations effortless, with the exception of Anbarasu (Madhavan), who would burst out over anything and everything.

2. You can’t really judge someone solely on their physical looks.

In today’s society, you never know when a demon will disguise himself as an angel and fool you. That’s what Nallasivam highlighted in the opening act of the film, when Anbarasu suspected Nalla of being a terrorist. Anbarasu misjudged Nalla based on his appearance, which included scars from the bus accident, and Anbarasu was simply wrong. Throughout the movie, Anbarasu will always get into trouble because he trusts the wrong people. So, don’t judge people based on their appearance, okay?

3. Be happy with whatever you have.

This is something that everyone should keep in mind since there are many people out there that are constantly on the lookout for something to satisfy themselves. Why put in so much work and chase something when you can simply enjoy the bliss with whatever you have in your hand right now? The art of gratitude can only be attained when you believe that what you have is more than enough. Just like Nallasivam, who believes that an inflated pillow and the floor would be enough to provide him with a peaceful night’s sleep. He made no complaints and accepted everything that came his way. That, once again, made his life simpler.

4. Keep your cool and you’ll be able to see clearly.

When you watch the movie, you can see who was the calm one (Nallasivam) and who was constantly agitated (Anbarasu). Anbarasu, for the most part, is the one who has gotten himself into problems with his persistent nagging personality. Nallasivam, on the other hand, who remains cool in all situations, always sees the light at the end of the tunnel. All of this is due to Nallasivam’s cool demeanour.

5. Be kind to anyone and everyone.

In my opinion, the most poignant part in the movie is when Nallasivam adopts the dog that caused the accident in which he was severely injured. He may have become so enraged that he could have hurt the dog. Instead, he was so kind with the dog and he adopted it and treated it as if it were his own son. That demonstrates how compassion can win people’s hearts.

People claim that God resides in the hearts of those who do good. That is true, and it is what Nallasivam eventually asserts in this movie. He saw God in those who were kind and loving to him. This dialogue from Anbe Sivam, “”That heart of yours which shed tears for a complete stranger – That is God!”, is a lovely moment that moved hearts. Not just a title but the main theme of the movie, “Anbe Sivam”.

This movie, which has marked 19 years now since the release, will continue to ignite our emotions and rekindle our ideas on “Love is God” time after time again. That is a word and if  you want to relive this intense feeling, Netflix has you covered. Yes! Anbe Sivam is actually on the streaming platform, Netflix. So, don’t forget to watch this classic drama on Netflix and meanwhile, why not share your thoughts about this movie with us too?