He has since gone places and is no stranger in Kollywood. 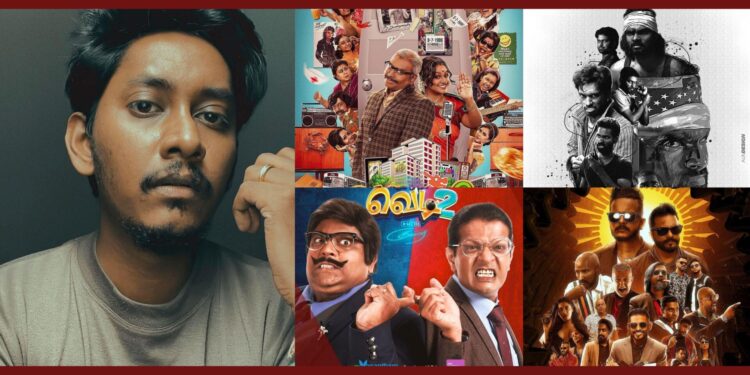 If you’re an aspiring graphic designer seeking someone to look up to, you’ve come to the right place. Read on to find out how Suthesan thrives in this industry, and it will also provide you with tips on how to develop a name and brand for yourself in this profession.

Without further ado, meet the talented graphic designer Suthesan Jeyaramah, who has 11 years of experience in the Graphic Designing world and is keen to share his decade journey in order to uplift young talents.

“Technology is in your hands and you can learn many things, and of course, the app and software makes it easier to do the job, but creativity plays a significant part in evaluating your skill and creative thinking.”

That was the first thing that came out of this Johorian’s mouth when Varnam interviewed him.

After witnessing many excellent creative youngsters with the potential to shine brighter in this field on the verge of giving up and lost, the 35-year-old stated that he would like to share what it takes to become a good designer.

Suthesan who is now working as a content editor for a TV channel said “Some people do not take graphic design jobs seriously, and I’d want to convey what the challenges are for both designers and clients, as well as how to deal with them,”.

“A designer of 11 years, I regularly update my portfolio, so for those who are just starting out, please create your own portfolio,” he told the upcoming talent, stressing the need of being spirited and perseverant throughout their career in this field.

“I, too, started with baby steps to get to where I am now. I’ll take any job that comes in, even if it’s a small one,” said Suthesan, who has previously designed short films and concerts when he began his career.

These small projects that he works on led to opportunities to work on Malaysian films as well as projects from both Singapore and Tamil Nadu, in India.

“THATPAM THAVIR” is also another project by Suthesan which eventually saw Kollywood directors swarming towards him.

Other notable projects he has worked on include KL Vampires, directed by Daven R and collaboration work with Kukubesi on “Mael Totey.”

“The more you design, the more likely you are to reach out to clients.  It doesn’t have to be a big project, even simple fan-made posters would do,” he continued.

Baby steps and patience is the key – Suthesan

The owner of Aum Design remarked that he has been an art enthusiast since he was a kid.

“When I was a kid, one of the things that influenced me was my favourite programme, ‘Art Attack.’  I’m sure most of the 90’s kids are familiar with this well-known show,” he says, adding that it also sparked his creativity.

“Following that, I happened to be an art stream student, which aroused my interest and inspired me to learn more about this field,” he added.

He was offered an opportunity to continue his studies at Universiti Utara Malaysia (UUM) after finishing secondary school, but he had to decline the offer because the course offered to him was business-related.

Suthesan pursued his dream by enrolling in the Bachelor of Graphic Design programme at KLMUC, thanks to the unwavering support and encouragement of his family members.

This is the moment where he had a major turning point in life after his small-scaled projects led him to bigger projects.

For me, everyone, every single person who crosses my life is an inspiration – Suthesan

“I personally look up to several well-known designers from the Tamil film industry, they are Prathool, Tuneh John, and Gopi Prasannaa,” he stated, noting how their efforts and hard work inspire him.

Suthesan has encountered several obstacles and problems during his 11-year adventure in this industry. Here are some of the struggles that he faced, in hopes to inspire future designers to never give up when the going gets tough;

Because he didn’t have the branding at the time, he created most of his early designs for free. So, he began to accept free projects. As a result of this, he had no earnings at that time. It may look to be a waste of time, yet these minor works are what will provide you with more context.

“We cannot anticipate a monthly wage in this industry.  We would be compensated based on the project that we were given,” he added, saying that his family was constantly concerned that he would not be able to make a decent living doing this job. After persuading his family about how this job generated income, they finally understood his situation and believed that he could make it.

Following that, there are some clients who tend to disappear and fail to pay for the work that has been completed.

Sometimes clients come to us not knowing what they want, and it’s difficult to read their minds and figure out what they’re thinking. The work of coming up with an idea is not as simple as it appears since the designers must understand the root of the project in order to come up with a meaningful concept that is related.

Nowadays, social media serves as a platform for network building, but most clients or promotional posters do not give credit to the designers, therefore we must find another way to advertise ourselves. Getting recognition in this industry is tougher than it seems.

Hereby with more than a decade of experience, Suthesan would like to share some tips from his experience that might be useful for the emerging talents who want to pursue a rewarding career in this field.

Create your own portfolio

Creating and updating your portfolio on a regular basis will show the customer what kind of designs you’re capable of producing as well as your area of expertise. Your portfolio is one of the most important factors in attracting clients, and you’ll have a better chance of getting projects.

Never give up attitude

As a person who decides to pursue a dream in this field, your main asset should be dedication and persistence. This is because opportunities may become few but consistent work delivery and presentation will help you travel far in this profession.

As designers, we are always challenged to think creatively and innovate. The more unique and creative concepts you produce, you will engage with more clients and the more projects you will get. With just a unique and artistic fan made poster you can get attention from people.

When you accept a project from a client, make sure you create an agreement so that there will be no ghosting issues when the job is completed.

Since the pandemic, many had advised me to get an office job but my dedication and willpower held me back from switching my job scope.

“Another reason I’m still going strong in this profession is my late mother, who has been a pillar of support for me throughout this journey,” he expressed.

“Everyone criticised me for not picking an office-related profession, but she backed me and trusted that I was making the right decision by pursuing this career. Her blessing is the only thing that keeps me going,” he said.

“I can now say that I made her proud by establishing myself through international projects,” he expressed.

Suthesan’s latest project is the ongoing project ‘Vadi Ready Vedi-Season 2’ under Mediacorp Singapore where he worked as a Publicity Designer and Motion Graphics Designer.

In the future, Suthesan intends to build a studio of international standards and recruit talented designers in hopes of producing Tamil movie posters as well as posters for Hollywood films.

“There are a lot of platforms to learn, use your opportunities wisely” he concluded.

Writer: I hope that Suthesan’s journey will be a great source of inspiration that will help you develop your talent and craft whilst succeeding in the designing field.

You may follow and catch up on Suthesan’s amazing designs by clicking HERE.