What Are The Lucky Delicacies Eaten During The Chinese New Year? 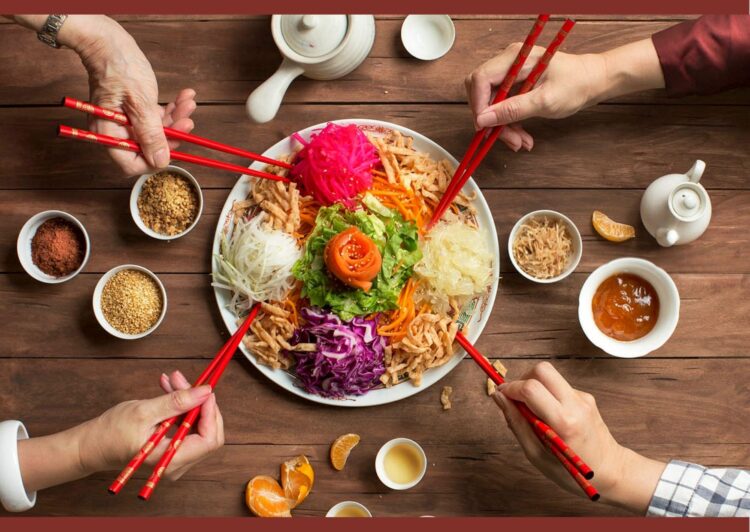 First and foremost, a very Happy Chinese New Year to all Malaysians. This year, we celebrate the Year of the Tiger with a roar.

When it comes to celebrations, we must not overlook an important component that plays a significant role: food. Tell me, what is a celebration without food?

Let’s have a look at the delicacies that will be offered during the Chinese New Year;

According to legend, the quantity of dumplings eaten during the Chinese New Year foretells how much money you’ll make the following year (the more, the better).

The round Tray of Togetherness, which is usually divided into six or eight compartments, depicts peace and family harmony. Fill the tray with little snacks such as dried fruit, nuts, or candy, such as this strawberry Lucky Candy. You might also serve these Chinese Almond Cookies, which are baked from scratch.

This traditional delicacy is created with sticky rice and eight “treasures,” which include a variety of seeds, nuts, and fruits, such as plums, jackfruit, and raisins. In Chinese tradition, the number eight is considered lucky, and consuming desserts on this festival symbolizes sweetness for the coming year.

Tang-yuan (sweet rice balls) are popular during the Chinese New Year for a reason: their circular shape symbolizes unification. Because its name (tang yuan) sounds like the word “reunion” in Chinese, these sticky balls also symbolize harmony and family togetherness.

Tangerines, oranges, and pomelos are some of the fruits consumed during the Chinese New Year. They were chosen not just because they are exceptionally spherical and “golden” in colour, indicating fullness and richness, but also because they produce a lucky sound when uttered.

The split tops of these steamed rice flour cakes (Fa Gao) are well-known. The more slices on the top of your cake, the luckier you’ll be in the new year, according to custom. Fa Gao means “prosperity cake,” so it’s no wonder that these sweets are popular around Chinese New Year.

These noodles, known as Changzhou mian (which means “long-life noodles”), can be up to two feet long. (Longevity noodles are popular at birthday parties as well.) The longer the noodle, the luckier you will be, according to Chinese superstition. Just be careful not to break one when cooking, as this is bad luck because it symbolizes a life cut short.

Spring rolls are thought to bring money and good fortune since they resemble gold bars. Pork, bean sprouts, shredded carrots, cabbage, and many other vegetables can all be stuffed into these deep-fried rolls.

So there you go… an array of delicious delicacies to enjoy during the Chinese New Year festivities with your loved ones.