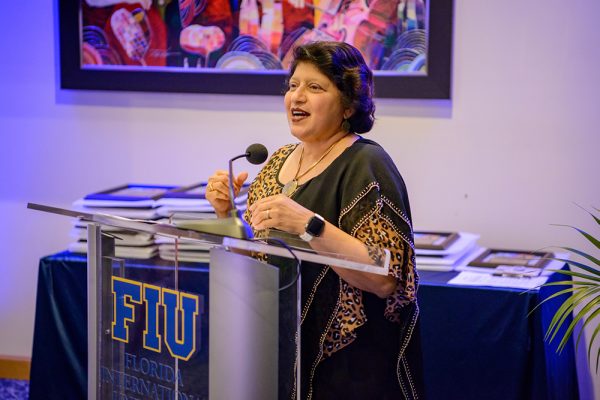 Who were the finest scientists of all time? Albert Einstein, Isaac Newton, and other notable figures are likely to come to mind — and with a good cause.

Women, on the other hand, are often left off the list, despite the fact that they have long made substantial contributions to science, even during periods when they were barred from formal education and employment in the field.

Despite the fact that Malaysia is a small country, it has produced a large number of well-known and successful individuals. In the world of health & science, Prof Dr Kalai Mathee is one of them who has made us very proud.

Kalai Mathee, fondly known as a Malaysian professor and researcher at Florida International University (FIU), became the first female scientist from Malaysia and the second overall from our country to join the American Academy of Microbiology in 2020. The Academy is the honorific leadership group within the American Society for Microbiology, one of the world’s oldest and largest life science societies.

Hailing from Ipoh, the daughter of late Tamilkuyil Kaliaperumal went to SJK (T) Buntong during her primary educational stage. She obtained a Bachelor of Science in Genetics from (1984, University of Malaya) and a Master of Science (1986, University of Malaya, Mentor: Prof Koh Chong Lek). The US based scientist holds the titles above all thanks to her fascination of the evolving and intriguing science world.

Kalai has paved her way by focusing on the molecular pathogenesis of Pseudomonas aeruginosa, the pathogen that causes high morbidity and mortality in cystic fibrosis (CF) patients. She is very enthusiastic when it comes to research especially digging deeper on the improvement in quality of life for CF patients.

After eight years in the faculty of science and a sabbatical stint at Harvard Medical School, she joined FIU’s Herbert Wertheim College of Medicine in 2007, playing a pivotal role in the early growth of the college. She became the first founding faculty and the founding chair of the Department of Molecular Microbiology and Infectious Diseases.

Researchers from various fields look up to her as a pioneer in the field and also as someone who is well respected among different ethnicities. What an awesome achievement! Ain’t that cool?

Kalai is also editor-in-chief of the Journal of Medical Microbiology with Norman Fry of Public Health England, the journal’s first global editor in its 50-year history. In 2008, the Faculty of 1,000 Biology members chose Kalai’s papers in the Proceedings of the National Academy of Sciences, which is a prestigious honour.

Kalai has broken boundaries and made important discoveries.

In 2011, she was appointed as the Mentor of the Year and clinched FIU’s highest distinction, the President’s Council Worlds Ahead Faculty Award, for exceptional achievement as a student-centred professor who exceeds expectations. Following that, she became the first recipient of the New England BioLabs Inspiration in Science Award.

Besides doing research and conducting talks, Kalai has published over 120 articles and encyclopaedias in the field of alginate gene regulation, antimicrobial resistance, gut and lung metagenome and microbiome, alternative therapeutics, forensic science, comparative genomics, and bioinformatics. That is a lot to take on, right?

Aside from making waves on home ground, her contributions have taken her to other countries where she continues to awe and inspire.