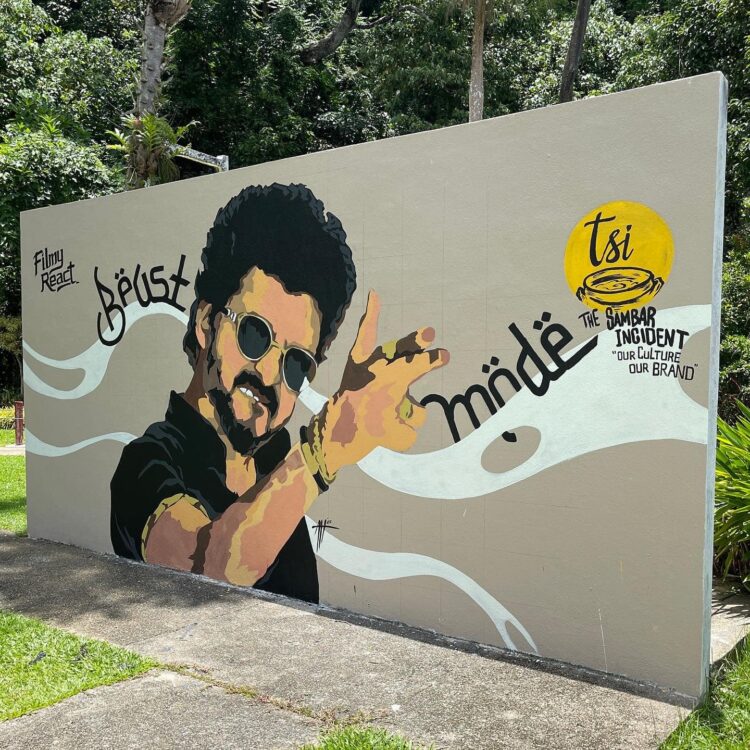 A special piece of news to all Vijay fans!

“Art can be a powerful catalyst in bringing more people together to take action.”- Shirien Damra

Nestled under a busy road in Penang, cartoonist Mohd Azmi has wowed us by a graffiti art of Thalapathy Vijay himself based on his latest action-comedy flick; Beast. With a brush and a palette of paint in his hand, the 38-year-old artist who rose to fame for his record-breaking art works and admits himself to be a Vijay fan completed the graffiti in six hours.

According to Bulletin Mutiara, Azmi has stated that YouTuber Nagenthiran  had posted on his social media platforms calling out locals to come up with an idea to promote the highly anticipated movie in Malaysia. It is stated that, Nagenthiran who is also known as the founder or creator of Filmy React YouTube channel, is also a die-hard fan of Thalapathy.

Being a Vijay fan, Azmi approached the YouTuber and suggested to do a graffiti of Thalapathy’s Arabic Kuthu from the trending song which hit 300 million views.

“The whole effort is dedicated to Thalapathy fans, as well as a homage to the actor himself,” Azmi added on.

Besides finding for sponsorships, the writer is amazed with the dedication of our local artistes and the amount of blood, sweat and tears which went into making the graffiti.

To make this effort even more interesting and remarkable, Lobhini, fondly known as a fashion designer who owns and manages the ‘The Sambar Incident,‘ agreed to take part in this endeavour. Our love for their unique T-shirts design and fashion have been escalating from the day of inception.

From coming up with spectacular designs for her beloved customers, she has once again stepped in by sponsoring free Beast T-Shirts to Azmi and Nagenthiran as well as bearing his full travel expenses to shoot the graffiti.

According to Azmi, he used a normal paintbrush and Nippon Weatherbond products which can last up to 4 – 5 years. Despite completing the graffiti in the month of the Holy Ramadan, Azmi admitted that he worked under the hot sun but all his hardwork paid off!

YouTuber Nagenthiran who is famously known as an outstanding content creator and movie reviewer has never failed to amaze the audiences by delivering his exceptional thoughts and even suggestions for our local music videos and also short films. Well, the writer thinks that we need such talents to have more honest perspectives towards our local industry!

Trust me guys, this man needs a pat on the back!

With more than 15,000 views, 2, 300 likes and definitely positive reviews from our netizens, this video has all our hearts. Each and every shot of the making of Beast Mode project is indeed a very special one for all Thalapathy fans!

Check out the making of ‘Beast Mode’ video here:

Thalapathy fans if you’re in Penang or about to visit the beautiful island anytime soon, don’t forget to drop by Penang City Park and tag the brainchild behind the extraordinary masterpiece!