Sometimes, I think of our society and my blood boils. It baffles me that we still live in a world where a woman’s character is judged and summed up based on the clothes she wears, the way she smiles, what time she comes home at night, whether or not she drinks and her sexual history.

If a man posts a topless photo on Instagram bearing his six-pack abs for the world to see, he’s only showing off his hard work. If a woman posts a photo of herself in a bikini, she’s labelled as thirsty and easy.

If a man drinks, it’s injurious to health, if a woman does it, she has loose morals.

If a man has multiple sex partners, it’s normal, heck he’s even considered a stud. If a woman engages in non-marital sexual activity, she’s spoiled goods. There’s even a saying that goes a key that can open many locks is a master key, a lock that can be opened by many keys is a broken one.

Just like Pink, H. Vinoth’s Tamil remake Nerkonda Paarvai starring Ajith, swings a wrecking ball and smashes those notions and shatters the pillars of patriarchy. It is a powerful film that will shake the very foundations of its viewers, especially those who are unfamiliar with the original.

We follow three young women. After a rock concert, they meet up with a few guys. The screen fades to black. The next scene sees the women speeding away in one car and the guys — one of them badly injured — in another (we learn that Meera smashed the dude’s head with a bottle). The first half is a stomach-lurching thriller. We learn that these men have influential backgrounds. They use their influence to scare, harass and threaten the three friends. They demand an apology.

Director H. Vinoth keeps us at the edge of our seats by constantly maintaining tension, tightening the proverbial noose with each passing moment. It’s thrilling, not just because we’re constantly looking over our shoulders, not just because we fear for their safety, but also because a lot of the goings-on will genuinely make you very, very uncomfortable. In one scene, Meera tries to lodge a police report against the assholes. The response by the police officer will make you want to reach through the screen, grab him by the collar of his uniform he doesn’t deserve to wear and punch the smug look off his face. There’s also the judgy look of their neighbours and co-workers. Everyone seems to have made up their mind about them based on ridiculous notions — “Every now and then I see guys heading into their apartment. They’re probably prostitutes.”

The second half is a stirring, thought-provoking and exhilarating courtroom drama. The men file assault charges against Meera, claiming that she’s a prostitute who seduced him, asked for money and then proceeded to attack him with a glass bottle. It’s during these courtroom sequences that Nerkonda Paarvai transforms from a good movie into a great one. The performances are stellar, the writing stings like a bee and the direction is always perfectly in balance.

We don’t see what actually happened at the party until the end credits roll, but we hear two sides of the story. We see two lawyers passionately debating in the court of law. This is a film where Ajith (who plays Bharath Subramanian, a retired lawyer suffering from bipolar; the only lawyer willing to help the ladies) can’t ass-kick his way to victory.

The accusers try to paint the defendants as immoral women. They label them hookers and then spin stories about their drinking habits, their sexual history, etc etc etc. Bharath begs the question: Does any of what they’re saying even matter when Meera and her friends rejected their sexual advances? When they said no? 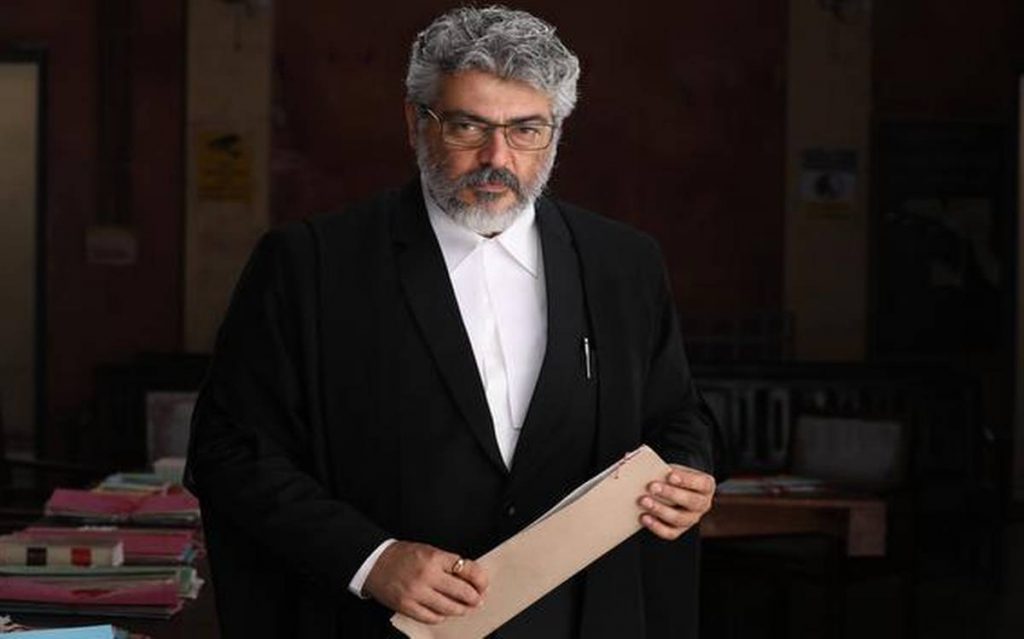 And that is why Nerkonda Paarvai (and Pink) works. H. Vinoth could’ve easily written the women like the sober and virginal “pure” entities we see in ‘mass’ movies, which would’ve made for a fairly straightforward and black and white film severely lacking in texture. In fact, it would’ve only strengthed the pillars of patriarchy. But he doesn’t. Instead, just like the original, the accused and her friends are written as sexually experienced, independent, middle class working women who consume alcohol (in other words, regular women) and then ultimately says that it’s still straightforward, it’s still black and white — no means no. It’s fantastic!

That said, most of what I mentioned above is pretty much a direct copy of Pink, at least from a screenplay perspective. When it comes to remakes and adaptations, I don’t just look for what works, I look for what’s different. Which is why I had conflicting feelings about the live-action (99% shot-for-shot) remake of The Lion King. It’s good, but doesn’t offer anything new, thus doesn’t need to exist.

Nerkonda Paarvai, on the other hand, is a wonderful remake, one that provides a rather different viewing experience than the original. A lot of that has to do with Ajith, who’s usually more movie-star than actor, performing in movies that are Tamil cinema’s equivalent to Fast & Furious.

There’s a scene where Meera gets taken. Upon hearing this, Ajith pulls down the dusty covers of his jeep in slow-motion and speeds away as the Thala fans around me screamed as if it’s the 1980s and Michael Jackson had just moonwalked his way across the stage. Party poppers were burst causing it to rain confetti. You know what’s about to happen next. But then… it doesn’t. Ajith drives around in search of her, even calls his friend at the police station for information, but nothing. He fails to save a woman from being raped. It’s absolutely surreal to witness a megastar like Ajith play a character who’s unable to swoop in at the last minute and save a woman in need.

But this isn’t to say that the movie lacks fan-pleasing moments. The tweaks H. Vinoth makes to the lawyer character, previously embodied by the legendary Amitabh Bachchan to suit Ajith’s action-hero status are great. Instead of an elderly man whose mind is slowing down, Ajith plays a middle-aged dude suffering from bi-polar due to something that happened to him in the past. This gives room to Ajith to exercise his talents and showcase a range that he hasn’t been able to in years. It also gives the character an exciting edge, especially given the actor who’s portraying him — he’s Bruce Banner whiskers away from turning into The Hulk.

H. Vinoth sprinkles in the mass-y moments and does so in a way that cheekily toys with the audience. Somewhere at the start of the film Ajith shoots a sharp stare at a hospital attendant (and into the camera). A stare that can only be shot if you’ve got a fanbase that is rabid, passionate and ready to explode. It’s a stare that says, “I know this isn’t a mass movie, but I’m still Thala so stay in your lane bloody fool.” It doesn’t lead to a fight scene or a punchline, but as they say, less is more. Eventually, we do get an interval fight scene, but even that is infused seamlessly into the narrative. Not to mention, it’s actually quite well choreographed and photographed.

But other than that, Ajith delivers the performance of his career. Bharat is mostly quiet, mind wandering around, unable to focus, sometimes speaking a little too softly. He’s a broken man and Ajith wears that brokenness on his face all throughout. He understands and respects the screenplay — this isn’t about him, it’s about the women. Ajith is more of a supporting character than a leading man here. When he enters the courtroom, he all but leaves the movie star behind. There are stretches in this film that play out in silence, so much so you can hear the fan in the courtroom spinning. Ajith doesn’t pierce this silence with his screen presence but allows himself to be engulfed by it too.

The ladies — Shraddha Srinath, Abhirami Venkatachalam and Andrea Tariang — deliver deeply effecting and effective performance. Their vulnerability, confusion and pain bleed through the screen. Every second is believable.

What can I say? I love this movie. Are there noticeable weaknesses? Sure, the romantic flashback feels unnecessary and sucks the life out of the film, but even these sequences don’t overstay its welcome. Did it shake me as hard as Pink did? No, but that’s only because I’m already familiar with the story. Nerkonda Paarvai is not only an excellent remake, it’s an excellent film, period. It’s gripping, thrilling and important. It’s also the film that made me hop on board the Ajith train all over again. It is unmissable.