As Karthik Subbaraj awaits the release of Jagame Thanthiram with Dhanush in the lead, the director has announced that his next will be with actors Vikram and Dhruv Vikram.

Titled Chiyaan 60 for now, Anirudh Ravichander will compose the film’s music and it will be produced by Lalit Kumar of 7 Screen Studio.

Happy to announce that my next directorial after #JagameThandhiram is…. 'CHIYAAN60'#Chiyaan60

And it will be an @anirudhofficial musical..

So excited for this film…. pic.twitter.com/Oof0je5Eg4

The poster features a man’s hand holding out a gun and child’s hand reaching out to it. More details on this project are awaited. Actor Dhruv, son of Vikram, made his debut with Adithya Varma.

Vikram was last seen in Kadaram Kondan that did not take off at the box-office. In addition to Ajay Gnanamuthu’s Cobra and the long delayed Dhruva Natchatiram with Gautham Vasudev Menon, Vikram is working on two big budget projects – RS Vimal’s Mahavir Karna and Mani Rathnam’s Ponniyin Selvan.

Karthik Subbaraj’s other film Jagame Thanthiram produced by S Sashikanth of YNOT Studios was initially slated to hit the screens on May 1. Now with the lockdown in place, the film’s release has been indefinitely postponed.

If not for the Bloody Virus.. Today would be #JagameThandhiramFDFS

Hoping for the Best..

This film stars Aishwarya Lekshmi and also has Games of Thrones and Braveheart fame actor James Cosmo in a pivotal role. The film has music by Santhosh Narayanan with Shreyaas Krishna for cinematography and Vivek Harshan for editing.

Karthik Subbaraj is also awaiting the direct OTT release of his production titled Penguin. Directed by Eashvar Karthic, the film stars Keerthy Suresh in the lead role. The film’s teaser was released on Monday and has set the expectations high among the audience. 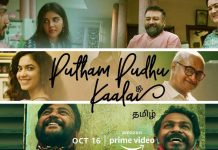