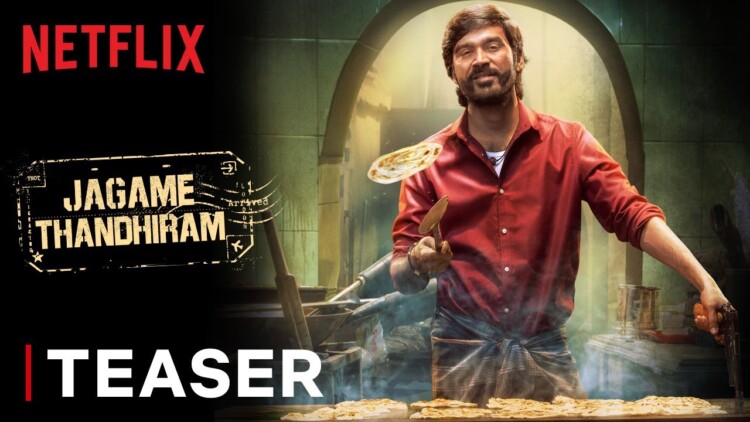 Intriguing with style and flamboyancy alongside his powering energy, Dhanush has been stocked up with a list of excitable movies having his fans awaiting for them to be hitting the screens soon!

Merry with all excitement and anticipation that held us in due for his film just by grooving to the two music tunes released,  Jagame Thandhiram was a promise to deliver a completely different variation to Dhanush’s usual village based stories.

CHECK OUT THE KILLER TEASER RELEASE:

This movie has a profound of edginess and ostentatious complex, touched with a peculiar  genre induced in it’s story line.  The main poster of this movie, was very similar to the conceptualisation of Jesus’s Last Supper! A film made by S. Sashikanth under the ‘Y NOT Studios’ production banner, with Santhosh Narayanan cueing the music, while Tirru is the cinematographer and Vivek Harshan works as the editor. Other movies lined up for this versatile star is also a Hollywood entry, staring in The Gray Man, and back to Kollywood in Naane Varuvan, Karnan and finally touching down in Bollywood for Atrangi Re.

Dhanush has certainly lived up to the quote, “Been there, done that.”

All the release dates and updates are yet to be announced. The official OTT release date for Jagame Thandhiram also falls into the same list. More updates coming to ya folks