Women are strong, beautiful, and built in a way that blends in with the natural world. Nature, indeed! Have you ever heard of the phrases “Mother Earth” or “Mother Nature” before? For the same reason, rivers are frequently seen as women.

This is because nature is often alluded as a “mother” because it is the source of life. That is why I believe that women are not only unique, but also one of the universe’s most sacred creations.

So, how are you planning to celebrate this momentous occasion? Well, make yourself comfortable on the couch and grab the remote to watch some female-centric films!

Kanaa tells the story of village girl’s dream to make it big in the sport of cricket. Kausalya, the daughter of a poor farmer who also happens to be a cricket fan, fantasises about the sport while sliding behind in her studies.

In order to achieve her goals, she must deal with a typical mother and a very supportive father. She comes from a small village where it is considered a sin for women to pursue their dreams.

The story revolves around four women, led by Jyothika, who is given hero status and is given the ability to make decisions.

The first scene between Jyothika and Urvashi, who plays a documentary filmmaker and Urvashi’s soon-to-be daughter-in-law, are candid and outright hilarious. When Urvashi meets up with her childhood friends, things get even more interesting.

Prabhu is impressed by Madhu, a young fisherwoman, and decides to make her his disciple by coaching her and paying her 500 rupees per day. The rest of the film follows the journey of these two distinct characters, and whether Prabhu achieves his dream is something you must find out.

Aadai follows the adventures of a free-spirited woman, whose self-assurance is shaken when she discovers herself naked after a wild party. The rest of the film follows her as she attempts to cope with this harsh reality.

A young woman plans to go on her honeymoon alone after her fiancé cancels their wedding. When she travels around the world, she will meet new people and have new experiences as she celebrates her newfound freedom. This film is also a remake of Kangana Ranaut’s ‘Queen’.

Jyothi, an Ooty woman accused of kidnapping and killing children, was killed in an encounter by the investigation team when she tried to flee. After 15 years, ‘Petitioner’ Pethuraj and his daughter, Adv. Venba, reopened the case, claiming that Jyothi was falsely accused.

Prosecutor Rajarathinam presents Venba with difficulties in bringing Jyothi’s case to a conclusion. The rest of the story follows the young advocate’s efforts to prove Jyothi’s innocence.

Today is International Women’s Day, so take that opportunity to laze yourself and relax on the couch with the other wonderful women you have in your life. It’s totally alright to take a break now and then! 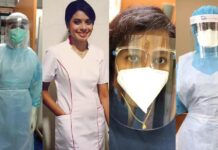 EXCLUSIVE IWD: Female Frontliners Who Risked It All For The Sake Of Their Patients