Navarasa will touch on one's emotions. You must have been in shock by Navarasa’s recent teaser or date announcement video! The most anticipated Tamil anthology will be broadcasted to the world in less than a month.

The teaser consists of a series of clips featuring the actors expressing each rasa. It introduces all of the anthology’s actors.

Many people are already aware that the show consists of nine stand-alone episodes based on the concept of the Navarasas – the nine emotions. But, aside from that, why are we so enthralled and eager to watch Navarasa? 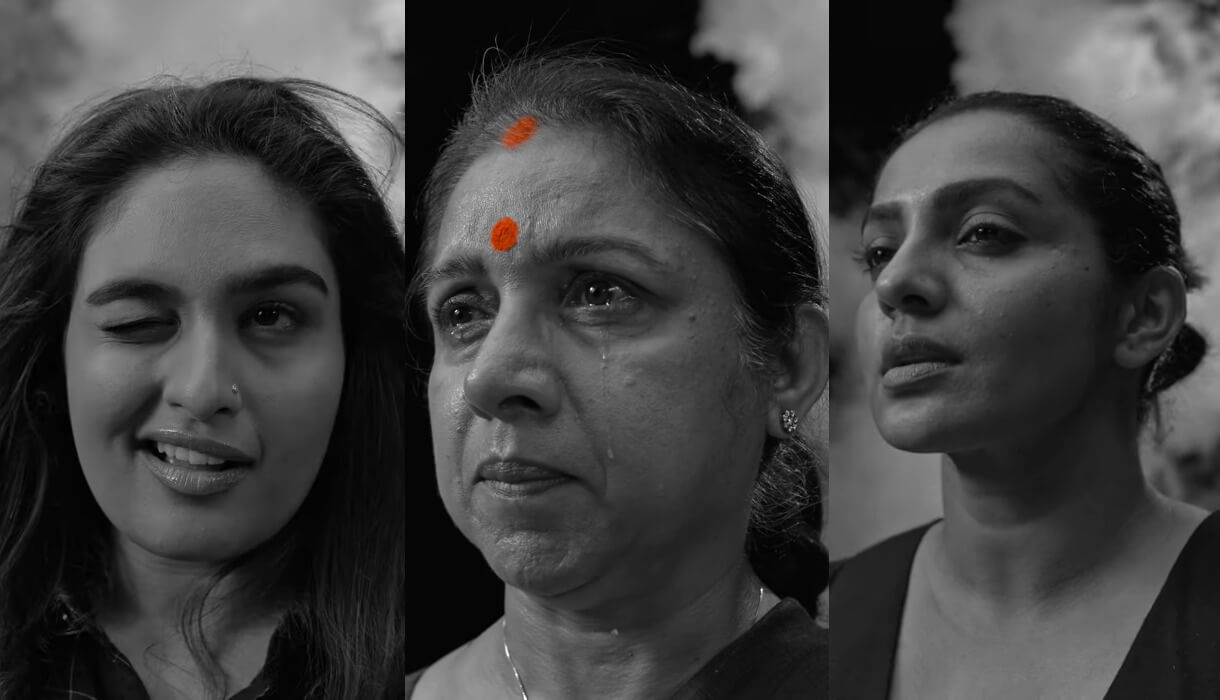 Navarasa’s female characters include Revathy (Savithri), Parvathy (Wahida), Prayaga Rose Martin (Nethra), Aditi Balan (Bhagyalakshmi), Rohini (Vaalamba), Rithivika (Anbukarasi), Anjali (Muthulakshmi), Remya Nambisan (Lakshmi). They are all well-known for their outstanding performances in their previous films, and some are also veterans on the list. As a result, not only the younger generation, but also the elderly, are keen to watch the anthology. 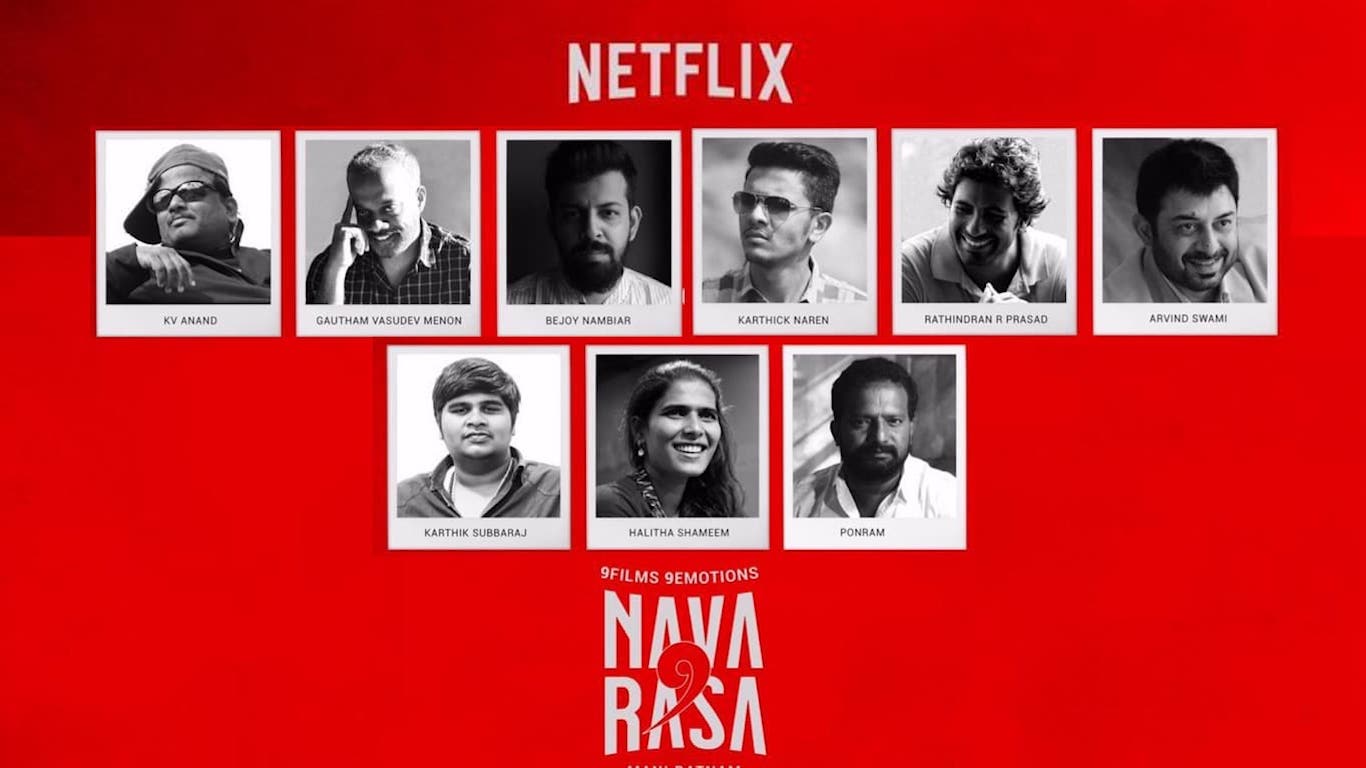 Even Though Mani Ratnam is the mastermind behind this anthology, these nine stories were directed by Priyadarshan, Vasanth S.Sai, Gautham Vasudev Menon, Arvind Swami, Bejoy Nambiar, Karthik Subbaraj, Karthick Naren, Sarjun KM, and Rathindran R Prasad. Arvind  Swami, who has previously been an actor, will make his directorial debut with this short film. Gautham would also direct as well as star in one of the dramas titled ‘Peace’. Consider how the work of all nine directors will result in a fantastic combination that will complement each other. The nine brilliant and critically acclaimed directors contribute their incredible vision and unique perspective to each rasa.

First of its kind in the Indian film industry

Anthology series have become very trendy and popular on Netflix in recent times. The typical anthologies released in both Kollywood and Bollywood industries consisted of four to five episodes covering the same type of genre. Navarasa, on the other hand, will be the one anthology drama with a total of 9 series and 9 different types of emotions (genre).

Vast casting in the series 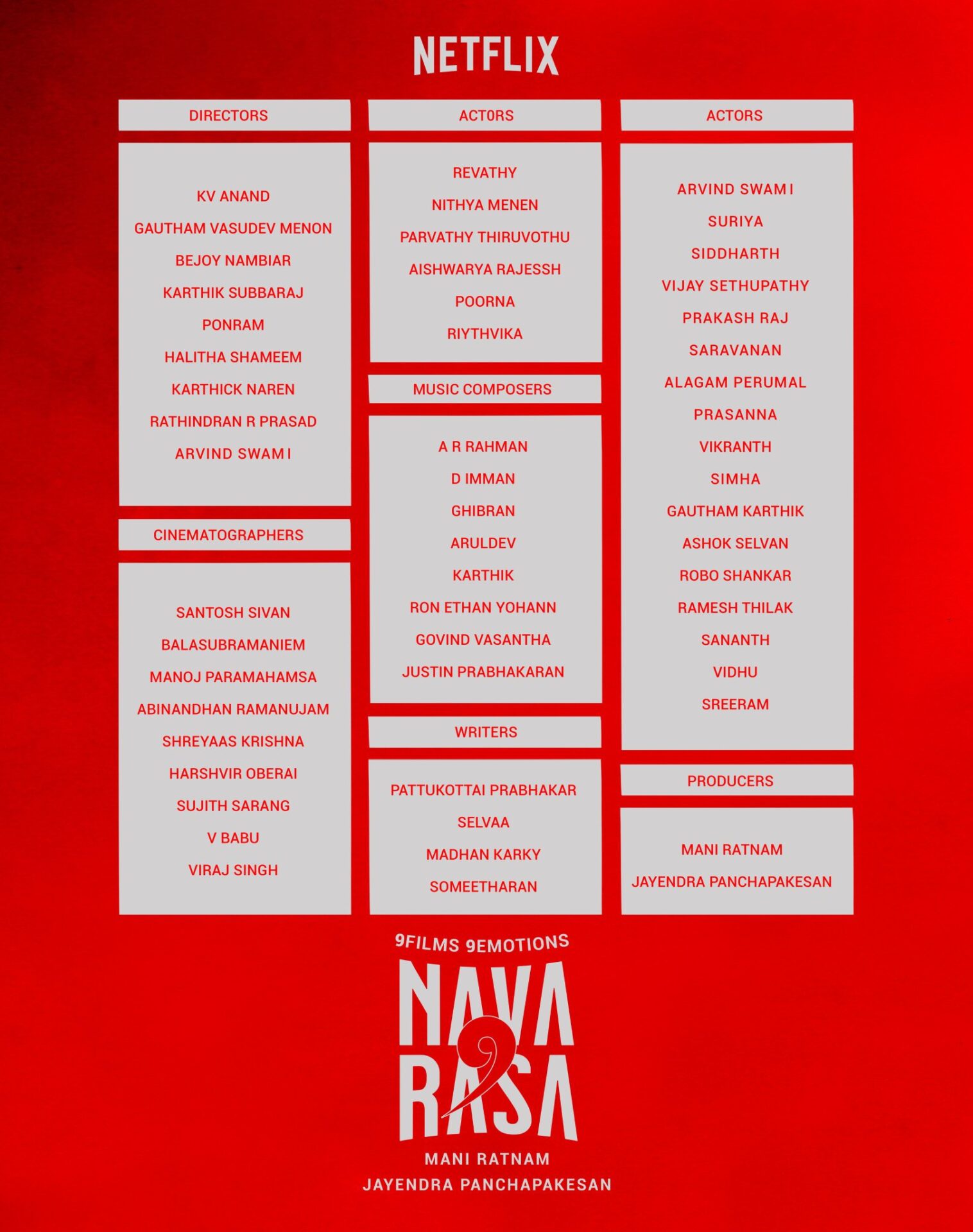 Navarasa is a social project

As Mani Ratnam has stated clearly, Navarasa is a pro bono project, and all proceeds from the film will be donated to those affected by the pandemic. According to News Today, Netflix has purchased this anthology for nearly Rs 15 crore. Profits generated benefited nearly 12,000 FEFSI employees. During the pandemic, each worker received Rs 1,500 per month.

According to what we saw in the teaser, AR Rahman has gone above and beyond to showcase a glimpse of each emotion in the 2 minute 36 second teaser. His music personally gave me goosebumps in the teaser.  Aside from AR Rahman, various segments of the anthology were composed by Arul Dev, Ron Ethan Yohann, D.Imman, Ghibran, and Karthik. Govind Vasantha and Justin Prabhakaran.

Navarasa’s tagline is “Nine Stories, Nine Emotions.” The teaser depicts the actors expressing various emotions such as anger, love, disgust, fear, laughter, peace, wonder, compassion, and courage. Personally, I think the best thing about the teaser is that the team didn’t reveal anything about the anthology, which might have killed the audience’s interest.

Having said that, whose story are you eagerly anticipating? Please share your thoughts in the comments section below.