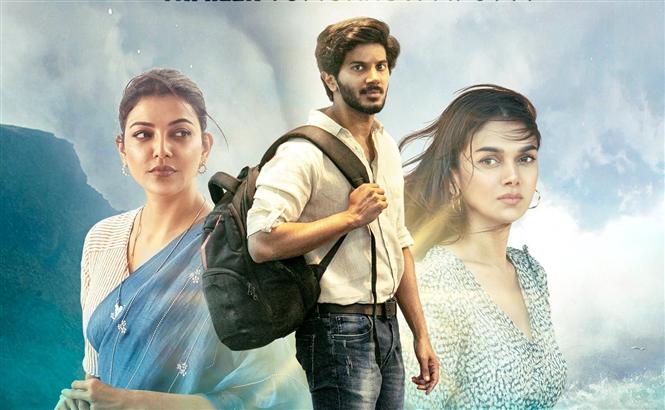 Touted to be a romantic-comedy flick, Hey Sinamika revolves around Aryan(Dulquer Salman) and Mouna(Aditi Rao), an incongruous couple abruptly turns into a tumultuous love triangle. But, Aryan’s sweet and possessive behaviour does not go well with Mouna.

Feeling restless by all that’s been happening, she approaches a psychologist named Malar(Kajal Aggarwal) and asks her to tackle her husband so that she can get a divorce. Malar, on the other hand, falls in love with Aryan, causing even more issues. What would Aryan do? Will he betray Mouna or fall for Malar?

To know the answer, you will have to watch the movie without any expectations!

To be honest, every character in the film is well-defined as they shine effortlessly in their respective roles. The rom-com comedy flick works like a breeze while keeping the tone lighthearted. When it slowly shifts the gear to drama, the film struggles to work and can barely keep the audience engaged. If only it remained a romantic comedy right till the end and treated the subject on an even funnier note, the film would have worked even better.

Though the screenplay tries to repeatedly make you feel lost interest and kicks boredom, the aesthetic beauty of the shots in the film pull you back to sit through it. The colour grading which been implemented are a treat to the eyes and definitely the cinematographer, Preetha Jayaraman needs a special mention in this article.