Manmadha Leelai; An Adultery-Quickie With Unexpected Twist That Barely Saved This Movie

This film is clearly geared and designed toward male audience. 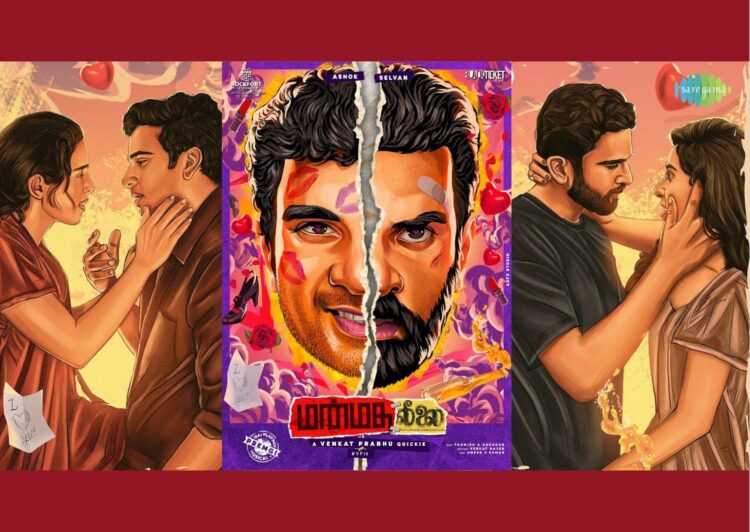 As the title denotes, Manmadha Leelai known as A-certified film that creates hype among the audience since its trailer was released on Youtube one week before its premiere on the big screen.

Helmed by Venkat Prabhu, the writer had a vast expectation for this new film but over-expectation seemed to disappoint at the moment, but no one to be blamed as this was so-called ‘A Venkat Prabhu Quickie‘.

Starring Ashok Selvan, who is known for his humorous-romance role in Kollywood films but surprisingly in this adultery flick, he has taken up a new role that he never likely did before. Ashok is portrayed as someone who deftly manipulates women to satisfy his sexual desires.

Venkat elevates the film which goes back to back showing the cuts of two nights unravel from one even to the other alternately showing how Sathya (Ashok Selvan) gets immensely physically entangled with two women Poorani (Samyuktha Hegde) and Leela (Riya Suman) before and after his marriage.

In 2010, Sathya who was a college student actively seen chatting with Poorni (Samyuktha Hegde) which ended up her inviting him to her house on the day her father was out of town.

Similarly, in the year 2020, Sathya, who is now married and a successful fashion designer, welcomes Leela (Riya Suman), who got drenched in the rain after arriving at his house expecting to find her friend’s birthday party. The timing was perfect for him because his wife and kid had gone to see her parents earlier in the day, and you know what? It was the perfect chance for a one-night fling.

The transition between these 2 parallel timelines was smooth where we can see how each scene mirrors the scenarios that happen in both from the rainy night, alcohol drinking to outfit-changing. The steamy-hot sequence has been cut out in Malaysia owing to some policies, making the film a less-fun romp. The scene reaches the intermission in both timeframes when the family who has been away returning suddenly.

Venkat has done his ‘thing’ here by switching back-and-forth scenes of how Sathya manages this sweat-dripping scenario with some comical lines and moves. In the following scene after he has been caught up was the attention drawer. This is where the adult comedy descends into a crime-thrilling movie convenient in the end. After a less-fun sailing in this film, Sathya’s transition from a womaniser to a cold-hearted killer zaps the viewers awake.

Half of us were as parched as the desert during the first half but the unexpected narrative in the final scene barely rescued this film.