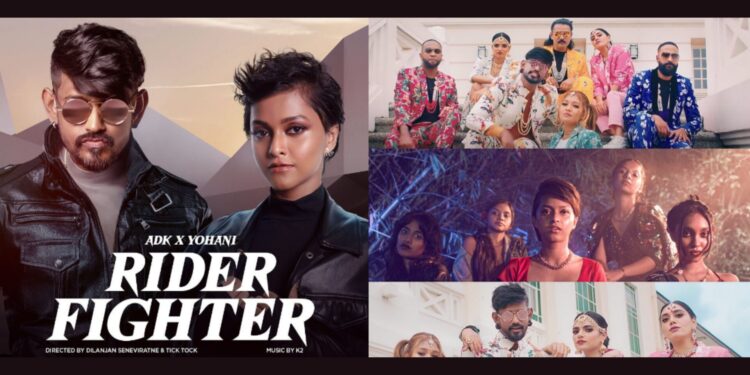 The Sri Lankan extraordinaire rapper Aaryan Dinesh Kanagaratnam who is fondly known as ADK has always been the master of delivering incredibly exciting songs that fit well into the current day and age, engaging a broad audience of all ages.

Recently, ADK released a vivid and energetic music video with renowned female rapper Yohani which goes by the name of Rider Fighter.

This song has a full-on hip hop bass, a super-catchy beat, eye-catching visuals, and powerful lyrics with a dash of Indian flavours that lure the audience to watch the video again and again.

Not only that, but one of the main elements that enhance this music video is the fact that they don desi-themed outfits.

Since its premiere at Rap Machine Worldwide Youtube channel on January 28th, this catchy and electrifying music video has received over 402k views on YouTube in less than ten days.

With the irresistible beat composed by Kavishka Dombawela, this song is creatively scripted, highlighting both Tamil and Sinhalese language.

Dilanjan Seneviratne and Tick Tock directed this fun-filled music video, which was mastered by Suresh Permal and written by ADK.

You may check out this entertaining music video on Rap Machines Worldwide official Youtube channel;

Yohani is a rapper, singer, and songwriter who has a massive social media following. She is recognised for her original songs and is well-received by people all over the world for her peculiar vocals.

This music video has received tremendous support from fans all across the world. Many fans praised the video’s utilisation of both languages.

See what people have to say about this masterfully presented music video here;

Previously, ADK’s music video Pachai, which was delivered by both ADK and Priyamali depicting the beauty of nature, successfully caught the eye of many with its great delivery of both music and visuals.