This music video starts off with Jai Bhim’s powerful lines, from that we can already sense the message that this song is about to express.

Recently, a Legal Trio with the collaboration of a Malaysian music label PU4LYF created an awareness project called “Sargar Pudicha”. This awareness project is inspired by the tragic occurrences in Malaysia, where Malaysians have been victims of custodial deaths which seems to have no end. 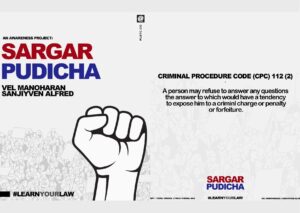 The almost four-minute track focuses on wrongful arrests, in which Malaysians are frequently arrested mainly on preconceptions and suspicion, then mistreated and abused while under police surveillance. Furthermore, it also highlights your rights when you’re detained.

This song educates Malaysians about their legal rights in the case of an arrest, as many Malaysians are still totally unaware of their basic rights. With this song, many individuals can be exposed to the procedure of police arrest and their rights under the Criminal Procedure Code, specifically S.117.

Mr Teeruvarasu, a practising lawyer, pitched the concept and idea for this music video, which was then composed and sung by Mr Vel Manoharan, a Barrister-at-law, and rapped by Mr Sanjiyven Alfred, a law graduate.

“We believe that this project, which is the brainchild of our young attorneys, will tremendously benefit our society,”

This music video also features snippets of some Criminal Defence Lawyers in Malaysia who have assisted the public pro-bono in cases of custodial death, this includes Ram Karpal Singh, Sivaraj Retinasekharan and N.Surendran.

Special kudos to the whole team for creating such an intensely powerful message!

This educational song was released on PU4LYF official Youtube channel. Check out the video here below;

We hope Malaysians will share this awareness project so together we can build a better nation!

The next hashtag that we do must be trending for the right reasons, not a life-ending