If you’re die-hard Super Singer fan, then you’re in for a treat!

Super Singer judges Unnikrishnan and Benny Dayal will be coming to Malaysia in the next few months for a series of concerts organised by Mojo Concert Series 2018.

The legendary Unnikrishnan will be performing at the Retro Rahman: A Tribute concert to celebrate the hits of AR Rahman. The veteran star, who is famous for evergreen hits like “Roja Roja” and “Poovukkul” will perform at the concert along with other major stars like Unnimenon, Harini, Hari Priya, Anil Srinivasan and the Fort Cochin Band.

So if you’re a big fan of Unnikrishnan and the Oscar-winning music director, make sure to get your tickets ASAP! 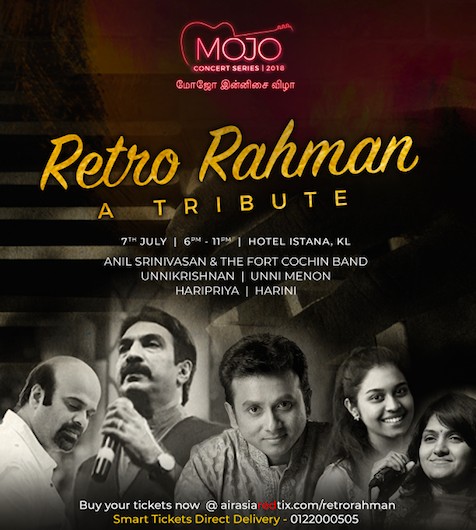 Retro Rahman: A Tribute will take place on the 7th of July at Hotel Istana in KL.

Benny Dayal, with his band, Funktuation, will be performing at the Malaysia Independent Live Fusion Festival (MILFF 2018) – which will feature a burst of local talents, independent artists, complemented by world-class acts.

Benny Dayal will also be joined by Satya Prakash and Pooja V – fresh out of their successful Super Singer run.

MILFF 2018 will also feature the likes of Rajesh Vaidhya, Andrea Jeremiah, and local artists from local hip-hop and rap label #PU4LYF. It’s going to be a massive concert – don’t miss it!! This concert will be happening on the 8th of September at the Stadium Juara, Bukit Kiara.

Get your tickets for Retro Rahman: A Tribute and MILFF 2018 now at Airasia RedTix.