The family of the 20-year-old from Bukit Mertajam in Penang who tragically took her own life after being bullied on the internet and social media wants the police to act so others would not experience the same fate.

At a press conference yesterday, the victim’s sister Logeshwari Rajendran said the family is seeking justice.

“The comments hurled at my sister on social media were hurtful. I contacted the cyberbully who made my sister’s video viral and told him that he was the cause of her death. He just sent me a laughing emoji via WhatsApp and even said he did not believe my sister was dead,” she added.

Thivya Nayagi is believed to have committed suicide as a result of depression due to a Facebook posting which was related to a TikTok video she made with her foreign colleague.

When the video went viral when a Facebook page called Jocker Oruvan had incessantly mocked and criticised her video. This was made worse by the derogatory comments hurled at the victim.

The Facebook account that instigated the cyberbullying has since been deactivated after the woman’s death became public knowledge. 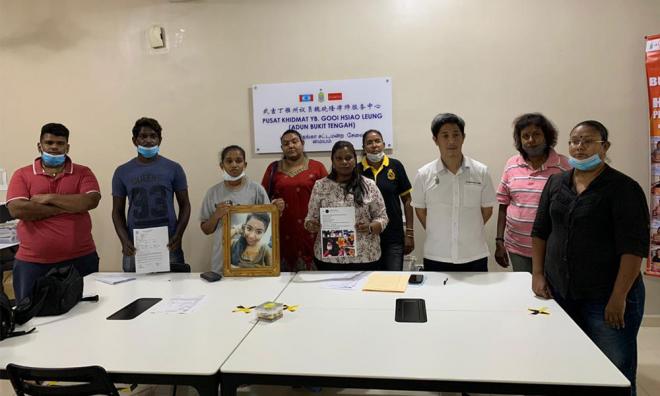 “Jocker Oruvan” was totally unknown to Thivya Nayagi. He had invited his 77,000 Facebook fans to question and abuse the woman’s association with the foreign worker, Gooi noted.

“The Facebook post, with over hundreds of shares and hundreds of hurtful abusive comments hurled at Thivya’s character and reputation under the Facebook post had been so overwhelming that it had caused her to take her own life,” Gooi said.

“Make no mistake. This Jocker Oruvan – who hides behind a fake name – is an evil person. He deliberately planned and incited his fans on social media to attack and bully an innocent young woman to gain popularity for himself on his Facebook page,” he added.

“Jocker Oruvan” can be charged under Section 499 of the Penal Code for criminal defamation as well as under Section 233 of the Communications and Multimedia Act 1998.

Meanwhile, Kasthurirani urged law minister Takiyuddin Hassan not to waste time and move with great urgency to table amendments to the Criminal Procedure Code and the Penal Code to act on stalking, cyberbullying and hate speech.

Kasthurirani recalled that a draft of the amendments to the Criminal Procedure Code and the Penal Code had been discussed, deliberated and finalised by many stakeholders especially the Women, Family and Community Development Ministry.

If you are feeling depressed or suicidal, or know someone who is, you may contact Befrienders’ 24-hour hotline at 03-7956 8145.