Annamah Abukutty, who officially turned 109 on March 31 is the oldest living woman in Malaysia. She currently holds the title, awarded to her by Malaysia Book of Records (MBR) last week. 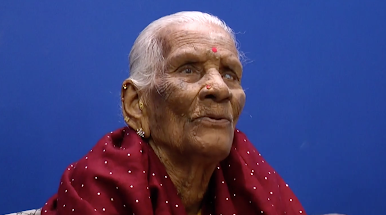 MBR chief operating officer Christopher Wong presented Annamah with a certificate, witnessed by her family members, who drove down from Batu Gajah, Perak, to join in the ceremony.

Annamah said she was very happy to receive the recognition.

“Anybody can live a long and healthy life by eating a variety of herbs that can be easily grown around the house, ” she said.

Speaking on behalf of the centenarian was her son Subramanian Madackanu, 72.

Subramanian said his mother was born and raised in Thachambadi, India.

She is very well-versed in traditional Indian medicine, widely practised in the village she grew up.

“My mother migrated to Malaysia with my father, who got a tree-cutting job in the country.”

“Later, word got out about her expertise and people started to approach her for cures, ” he said.

Subramanian said his mother was much sought-after for midwife services, reflexology and tattooing, as well as making herbal remedies.

She has her own regimen to keep fit since young.

Among others, she used to fast every Monday until she was about 80 and drank a concoction of castor oil with garlic every six months to cleanse her digestive system until today.

When she has a cold, she just goes to the kitchen and whips up a herbal concoction.

“She will be fine after that, ” he said, adding that the family held a big birthday celebration.

According to him, Annamah is biologically 110 because her birth was only registered a year later in 1911. Annamah had five children, two of whom remained in India.

Subramanian said his father died during the war between 1942 and 1943, after which Annamah raised the family by providing her services and tree cutting part-time.

She never charged a fee but people would give her a token based out of generosity.

Everything she gives is food-based and is safe to consume.

“Despite moving out of Kinta Valley estate where she lived for many years, many people still come looking for her to seek remedies for various health problems, ” he said.