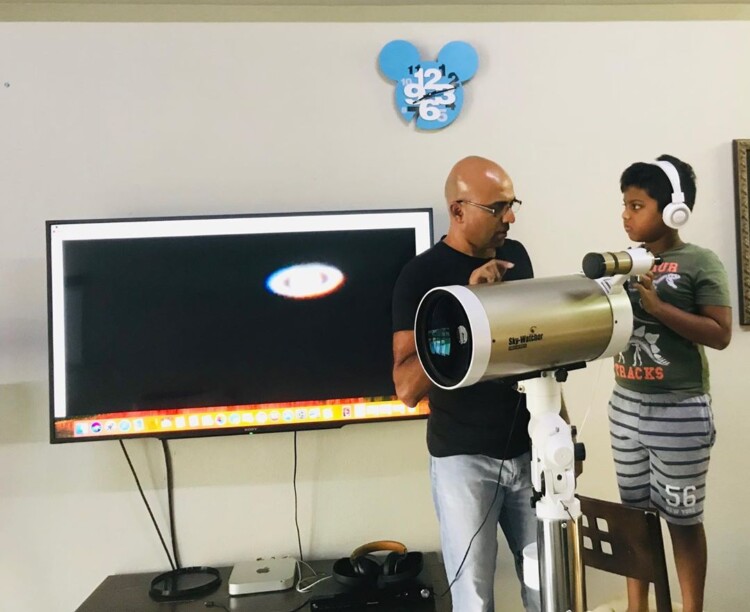 In the era where most of us watched Hollywood space films, here comes a father-son duo who discovered space mysteries at the Moon region. The 47-year-old father Annamalai and his 7-year-old son Arav, hailing from Penang have made known their explorations and findings to the public.

Interestingly, the father-son duo has been doing extensive space research for the past 2-3 years, investing in a lot of effort into invisible art and photography to make this discovery recognised among the public.

The duo were able to see the moon’s structure, architecture, and moving objects from a different landscape. It was all recorded though the distance from the earth to moon which is approximately 384,400 kilometres (km).

After they compiled all those discovery videos, Annamalai informed the Ministry of Education (MOE), Agensi ANGKASA Negara. They also took part in a virtual competition called Scinex Competition Negeri Sembilan 2020.

Amid the Covid-19 lockdown, all related documents had been submitted to the authorities via online. Annamalai and Arav received a gold medal after emerging as champions.

Based on a source, Annamalai stated that “the National Observatory is showing an empty moon on their website, school books, public books, and bookshops.” This inadvertently created generations lacking in space knowledge. Thus, his aim is to educate upcoming generations on space science.

He also stated that “in this video, we used closed-up videos, infrared and ultraviolet where we can get a clear picture of the moon’s architecture, moving devices and mining equipment.” He further explained that human existence has yet to be discovered due to a lack of advance level equipment. He also said that prominent space agencies are aware of this matter.

In the year 1976, a scientist named George H Learned published a book using NASA photographs about mining activities by another civilisation in existence. Annamalai did not focus on these things until he discovered this mystery using his own equipment. He has spent over RM 30,000.

The money was used to purchase video cameras, smartphones, Mac mini, a long-range telescope, including infrared and ultraviolet. Annamalai combined all of these and turned it into a home system. Arav’s father connected the telescopic lens to the smartphone and recorded traffic on the moon. He also documented movements, shapes, and objects while the recording was going on.

Annamalai started this research when Arav was about 4 1/2 years old. He purposely diverted Arav’s concentration who was always busy playing video games on his smartphone. He shared some interesting information about space traffic and his research to Arav. The curious boy began to develop an interest in space and his concentration was no longer on video games.

Annamalai wrote to Varnam, he stated that the National Aeronautics and Space Administration (NASA) also congratulated Arav saying that “it was nice to hear from a young person who is interested in space science and exploration. NASA is not permitted to support research outside of the USA but Arav should not give up on his dreams,”

“If Arav wants to do space science or engineering then the best thing that he can do is to focus on school, learning lots of math and science so that one day he may become part of the international community of scientists/engineers,”

“Maybe he will work for the Malaysian space Agency when he is older. However, Arav still feels he doesn’t have the opportunity in his home country, hence Arav can get further schooling outside of his country or work for another space agency like ESA, NASA, JAXA, etc.”

Apart from this, the director of Royal Photography Society UK/Education and Public Affairs had also congratulated the young Arav and wished him success in the science innovation competition.

Annamalai was quoted as saying on behalf of the director, “he found the images which Arav had shared as fascinating, and considering the distance between the earth and moon their resolution is remarkable. The director wished Arav every success with future imaging, space studies and looked forward to following his future career as an astronaut.”

Annamalai hopes the respective space agencies would sponsor their exploration by getting them bigger and advanced space exploration equipment so more discoveries can be done at the same time, roadshows can be organised to spark an interest in space studies amongst youngsters.

Congratulations and all the best to Annamalai and Arav from the Varnam team!