A trio of young scientists have defied all odds again by taking home a gold medal and a platinum medal each after emerging as winners at the International Invention Trade Expo 2020, held in London.

Yuvika Mahaganapathy, 10, Kailesh Saravana, 11, and Kavisha Nagarajan, 11, blitzed their way by bagging their sixth gold medal in the international competition. The three students from SJK Tamil Taman Melawati, Selangor had previously become stars in their own right at the International Innovation Competition, held in Canada with their “My soil, my plant” invention which took place on June 30th. Thus, the competition which took place in London recently, was their second attempt to victory.

It was a double victory as their “My soil, my plant” invention matches plants with the type of soil, in order for it to flourish and bloom well. It is a device, which is linked to a mobile application created by the students. Once the device is stuck into the soil, it will list down in the app, the type of plants that can be cultivated on the soil.

More than 400 participants from 27 countries namely the UK, US, Canada, France, Iran, German, Korea, Japan among others competed at this prestigious competition.

Congratulations once again kiddos on your ingenuity and inventive innovations! We look forward to your future inventions!

Such achievements are prove that our local Indian students have a lot to offer, equipped with wonderful god-given gifts and talents. Dream big kids! 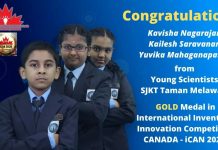