Yet another inspirational woman has spurred people to excel and believe in their dreams. Datuk Sudha Devi KR Vasudevan, former High Commissioner of Malaysia to Australia, was the Ambassador of Malaysia to the Federative Republic of Brazil, who also held numerous diplomatic positions in Germany, Singapore and Switzerland.

Now Sudha Devi has been appointed as Chair of the Commonwealth Foundation for a two-year term starting 1st January next year.

In a statement on 8th December, Wisma Putra stated that this decision was made at the Extraordinary Meeting of the Commonwealth Foundation Board of Governors, virtually on 28th October 2020 in London, United Kingdom.

This makes her the first Malaysian and the first Asian chair since it was established in 1966.

The Ministry of Foreign Affairs (Wisma Putra) made the announcement after she defeated candidates from Cameroon, Kenya and Papua New Guinea in the election held during the Extraordinary Meeting of the Commonwealth Foundation Board of Governors hosted on 28th October.

The decision to appoint Sudha Devi as Chair was later endorsed by the Commonwealth Heads of Government on 7th December.

The Commonwealth Foundation was developed to promote the engagement of people to share opinions and work together on developing inclusive communities in all areas of public dialogue.

As chairman of the Foundation, Sudha Devi will head the Board of Governors’ meetings, represent the Foundation at intergovernmental meetings and activities and act as the Commonwealth Foundation‘s envoy for its mission.

In thanking Commonwealth Foundation member countries for their support in appointing Sudha Devi, Malaysia expressed its commitment in supporting the work of the Foundation in achieving its vision and goals and in affirming its role as a voice for the citizens of the Commonwealth.

Click here to read the press release on Sudha Devi’s appointment as CHAIR OF THE COMMONWEALTH FOUNDATION. 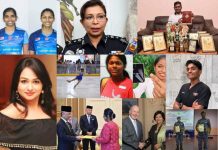