After a three-year hiatus, motor rally racer Karamjit Singh is set to make a big comeback at the national rally championship in Sepang on 26th and 27th June, which is sure to be a big hit.

Due to the movement control order, the rally’s first stage was cancelled on 3rd and 4th April. The four-round tournament concludes in November.

A national hero, a great racer and an absolute legend who has so much more to contribute and bring glory to the nation.

We love and share his commitment and enthusiasm. We are excited about our future together and to have landed him as a brand ambassador.

Karamjit‘s return to motor rallying, according to Rabin, is an exciting moment for the sport and will provide considerable opportunities for his business.

He hoped that the relationship would help Malaysia reclaim its place on the world rallying stage.

Karamjit‘s comeback will be the next chapter in a remarkable sporting story that began with him becoming world rally champion on his first attempt in 2002, followed by National Sportsman of the Year in 2003, and then a rock-bottom hitting experience as an e-hailing driver when the Covid-19 pandemic affected the sport last year.

He expressed appreciation to Cisco for investing in him and expressed enthusiasm about contributing to his 500 trophies won after his first rally in 1994.

Karamjit struggled to secure sponsorship in recent years, largely due to scant interest in motor rallying by the government and private corporations.

I am very happy to go on this new adventure with a wonderful family that has offered me unconditional support.

Karamjit said he’ll race on gravel, tarmac, and wet tracks in his trusty Proton Gen2 rally car, which has been idle since his last race in 2018.

I am fit and healthy and intend to race for at least another five years as there’s no age limit to rally racing.

In 2002, Karamjit and co-driver Allen Oh made history by becoming the first Asians to win the FIA World Rally Championship Production Car title in their first attempt.

When Edaran Otomobil Berhad (EON) lost the Proton car distributorship in 2003, the new management decided to stop sponsoring the sport due to the high cost of creating brand awareness.

Karamjit‘s financial problems began there, and he has had to sell his apartment and three cars to support his racing career since 2012.

However, his return is a matter of national pride, and we can’t wait to see the ‘Flying Sikh’ on his Proton Gen2 back on track. 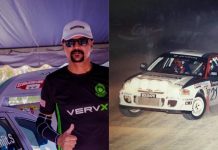