Single Mother Kogila Vani Struggles To Save Her Sick Child

Will your care to help Kogila ease her burden? 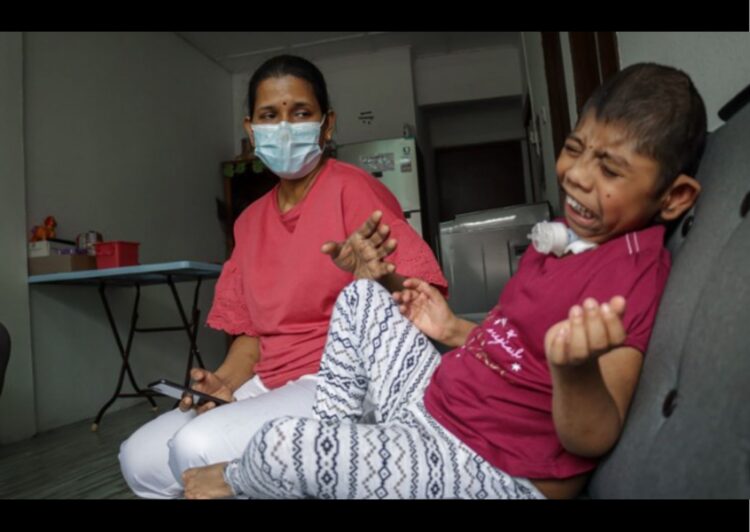 No one in the world can care for you better than your “Mother”.

Here is a mother who is completely reliant on herself, not even caring for herself, but who is doing everything she can to save her only child.

Single mother, S. Kogila Vani lives at a rented apartment in Pandan Indah, with her five-year-old daughter Yaashika, who is unable to walk or talk, and has both visual and hearing impairments.

Although the nearest hospital is barely ten minutes away, Kogila must descend eight flights of stairs while carrying her before taking an e-hailing ride.

Yaashika had a neurosurgery at the age of two because her skull had not matured sufficiently to fit her developing brain. Since then, the girl has been in and out of the hospital due to her medical condition.

Unlike most children, who love having friends and going out to play, Yaashika had to spend most of her days in her bedroom, under her mother’s watchful eye, with only stuffed toys and colourful wall stickers for companionship.

According to FMT, 41-year-old Kogila got divorced last year and started a home food business, but she had to shut it down after Yaashika became susceptible to illness from cooking fumes which resulted in her nearly dying.

“As a tracheostomy patient, my daughter is quite vulnerable. Smoke, e-cigarette emissions, and cooking odours are all too much for her body to handle. She gets infected all the time and has to be admitted in hospital”.

The heart breaking moment was when the doctor advised Yaashika’s mother that there may come a time when she has to choose between allowing her daughter to suffer longer or allowing her to pass away peacefully. But the mother is determined on keeping her only child alive making the most of their time together.

Kogila then decided to start a digital business selling traditional apparel, but she could only make about RM100 to RM150 per month, less than half of what she was making from her food business, as mentioned by FMT.

Yashika must be fed every four hours, and the poor mother must ensure that her child is breathing properly at all times, as any blockage in her airways could be fatal.

For your information, Kogila receives monthly remittances from her ex-husband and RM500 from the welfare department, but these funds are insufficient to support Yaashika’s expenses to get personal and medical equipment for her condition which includes:

We may not be able to do much, but even a small contribution can help them meet their needs. Let us step up and offer the mother and daughter the help they deserve in order to save Yaashika’s life.

Please send a WhatsApp message to FMT’s Helpline at 019 3899 839, if you would like to help S. Kogila Vani and her daughter.