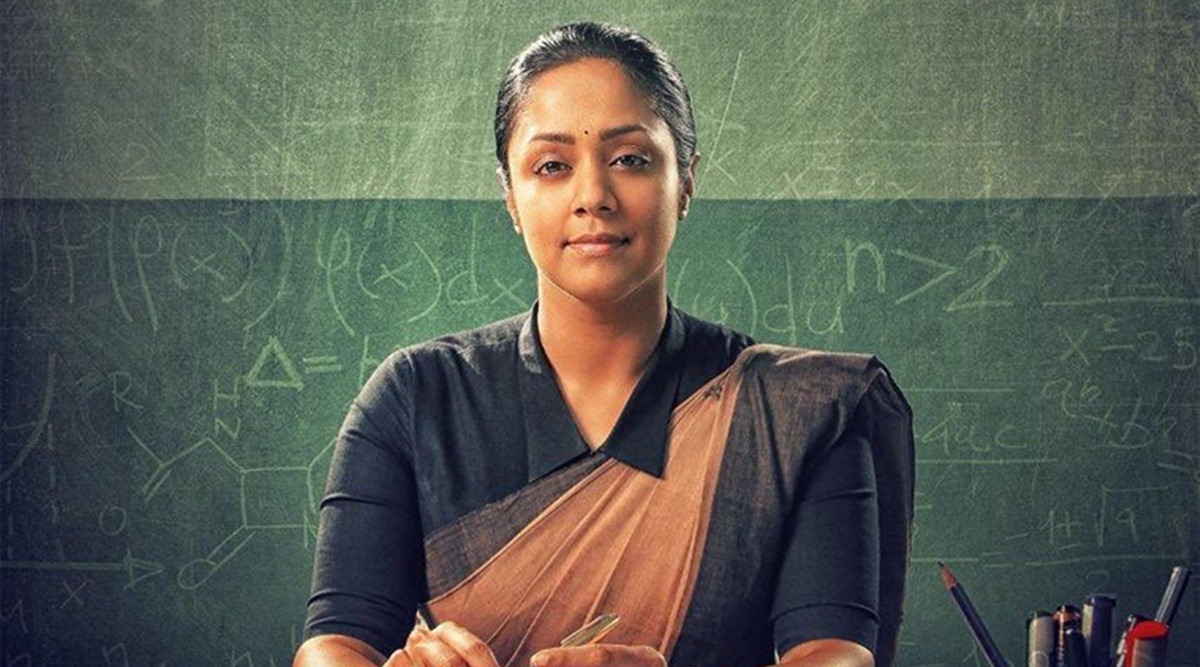 When Jyothika’s character Geeta Rani first arrives at the doorstep of a public school in rural Tamil Nadu, she has a look of disappointment and disgust plastered on her face. The school looks more like a rundown prison, dusty and murky, than an institute of learning. We see students fighting, bags and books being flung around like frisbees and teachers who are more interested in watching funny videos on YouTube than actually trying to teach a class full of hooligans with their shirts untucked and books turned into paper balls. My mind immediately veered towards movies like Coach Carter and Blackboard Jungle, where a passionate teacher joins an unruly school and inspires the students and faculty, despite first facing resistance by them.

But I soon realised that was not the case. Consider the way director Sy Gowthamraj chooses to reveal our protagonist’s profession. She doesn’t walk into school alone but accompanied by a mother and her young daughter under the guise of an aunt or neighbour. There is an exchange between Geeta and the school admin who’s incredibly rude to her, but she remains calm. Next, we’re introduced to a thug-ish and corrupt assistant headmaster, who charges an exuberant amount for the little girl to go to school. When Geeta questions him, he yells at her boorishly. She storms out of the office and rings the school bell repeatedly. When the admin and thug AHM dash towards her to get her to stop, she passes an envelope, in it a letter of appointment that states she’s the new headmaster of the school. The camera cuts towards the various faces looking on — the admin, the AHM, the rest of the faculty, the students — all of whom are shocked. Even the music has begun to swell as if to say, “It’s Geeta Rani b*tches!!” Raatchasi is that kind of movie.

In Padayappa, there’s a song with a verse about Rajinikanth’s childlike gentleness, and another that highlights his tiger-like ferociousness. Here, there are scenes where a kid looks at Geeta like she’s a queen or an angel who descended from the heavens and another where she’s painted to be a fearless demon. She’s both Rani and Raatchasi. Nallavanuku nallavan, kettavanuku kettavan. Mass da! This in and of itself isn’t a problem. I’ve been dying to see a female-led mass movie for a very long time.

But why doesn’t Sy Gowthamraj go all-in on this? There is a fight scene — yes! Believe it or not, Jyothika actually singlehandedly beats up a bunch of goons which made me smile like a little kid given a lollipop. But why is it only a minute long? And why does it lack the style, weight and cool outlandishness commonly found in a male-centric commercial Tamil movie? There are more than a couple of instances where Geeta Rani silences her adversaries with her words, but where is the memorable punchline? She gets a flashback sequence that reveals her mysterious past. But the announcement of it lacks the fiery intensity found in say Pokkiri. At the helm of someone like A.R. Murugadoss or Atlee, Raatchasi could’ve been a game-changing movie for Jyothika (and possibly other female leads), at least from a sheer spectacle standpoint. 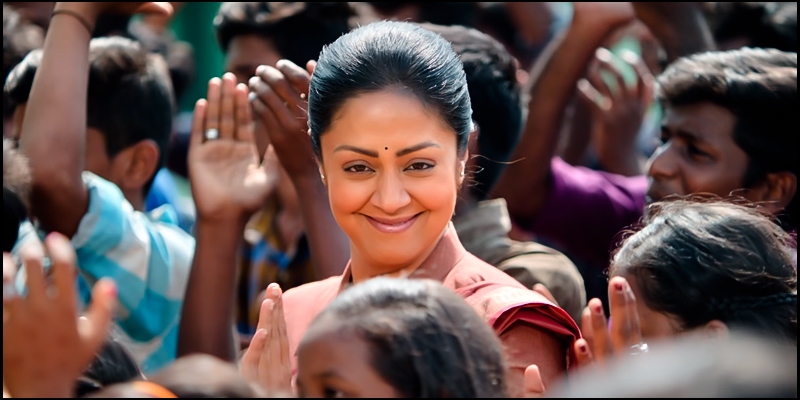 But the bigger issue lies in Sy Gowthamraj’s flat as a ghee thosai screenplay. Raatchasi isn’t about the characters that populate each frame, but about Jyothika looking into the camera and spewing messages to us, the audience. Too bad, good messages don’t make good movies. The beauty of film is that you can create a world, populate it with interesting three-dimensional characters and send those characters on a journey of highs and lows. Through it, a filmmaker can slip in perspectives, ideologies and messages in a nuanced way. The character(s) and their journey should come first. Good movies can have good messages, but good messages don’t automatically translate to good movies.

But Raatchasi is one of those movies where a character is nothing more than a one-dimensional being created to regurgitate lessons in the most explicit of manners. It sucks even more when a lot of these lessons are painted in black and white as opposed to shades of grey — her dating advice to a teenage girl is basically “don’t date.” (I can imagine grandmothers in the audience telling their grandkids: “See! Listen to Jyothika.”)

Raatchasi also doesn’t have a central conflict that gradually escalates, which is especially necessary for a straightforward mass movie. Right from the get-go, all the students are fully in support of Geeta Rani. All of them love studying, love sports and love being disciplined. They just needed the right mentor to speech them into shape. Because Sy Gowthamraj chooses to take this route, he then looks outwards for obstacles to be placed in front of Geeta. Insert your average moustache-twirling politician villain who owns a private school.

I guess the general premise is that the villain doesn’t want Geeta Rani’s school to become more popular than his because… money. Except, he’s a completely useless villain who gets outsmarted by Geeta Rani from start to finish. And Geeta Rani herself? Well, she’s a super headmaster who’s great at literally every single subject, including PE and is able to solve each problem that comes her way faster than a kid with a stomach ache running to the toilet. She’s so powerful that she resolves caste violence within two seconds with low-pressure water shooting out of a garden hose. If only the students in Pariyerum Perumal had her as their headmaster.