A huge step forward for our Indian martial arts! 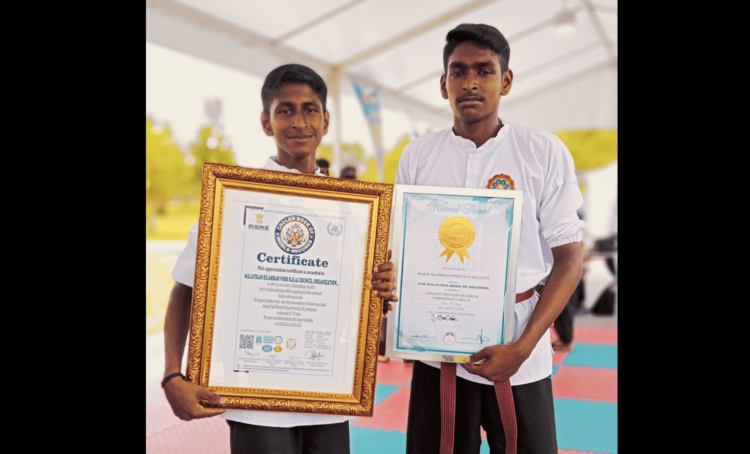 Hailing from the beautiful historical city of Malacca, Shavinash Karthikesan and Thivyan Karthikesan have made us proud by their hallucinatory achievements such as demonstrating ‘Silambam Porr Kalai’ (Ancient Tamil Martial Art) for 72 hours.

Their father Karthikesan Kamaresu proudly took to his Facebook page to celebrate his son’s achievements.

Both brothers’ names are now listed under the prestigious Cholan Book Of World Records and the Malaysia Book of Records. Trained by professional silambam masters; Mooralitharan and Suresh Bala krishnan, the most anticipated event was held from 21st to 24th April 2022 at Dataran Nilai, Negeri Sembilan. Spearheaded by “SILAMBAM PORR KALAI MALAYSIA COUNCIL,” a total of 200 participants showed up for the four day event.

Coming from a middle class family background, the talented brothers have also set a world record by performing various kinds of traditional Tamil martial arts, such as ‘Varmakkalari Adimurai’ and ‘Silambam’ for 12 hours and 30 minutes non-stop through the online platform which was held virtually on 11th July 2021.

In an extraordinary display of core strength and stability, the brothers had previously rose into the limelight by earning the gold medal representing our country for the International Friendship Silambam Porr Kalai Championship, in the 9-12 year old category that was held in Medan, Indonesia in 2019.

Our heartfelt congratulations to both of you!