Aramm Review: Who Needs Male Saviours When You Have Nayanthara? 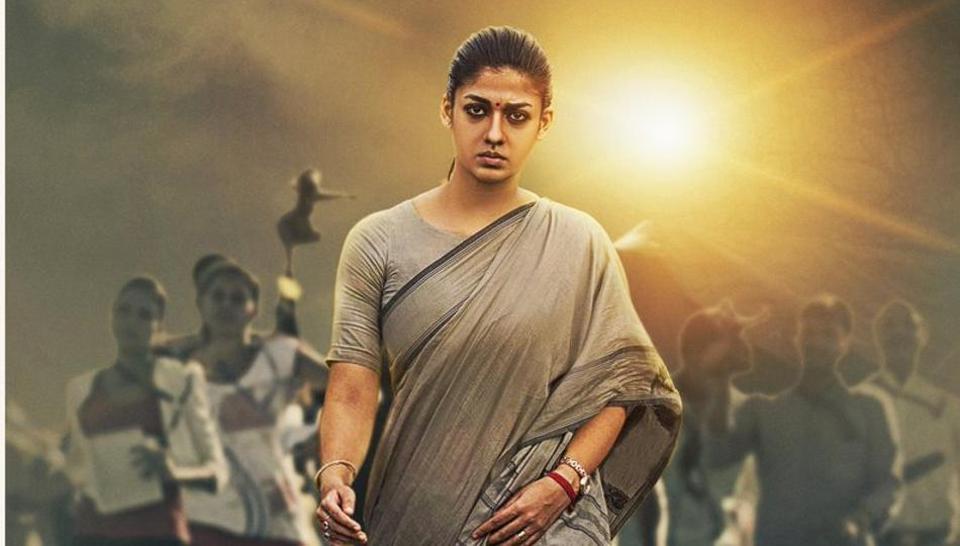 As I was watching Aramm a couple of things popped into mind. I remember the horrible Vijay starrer, “Thalaivaa” in 2013. Midway through the movie, Amala Paul, points a gun at Vijay and reveals herself to be an undercover cop. The cinema suddenly awakened (yeap, prior to that, everyone was falling asleep) and went holy shit!!

Does a heroine in a Vijay movie AKA just-a-hot-chick-that-dances, actually have a role of substance? Since when did India become woke? Of course, that turned out to be a load of rat shit and by the end of the movie, Amala Paul resigns as a cop to marry the gangster and become a full-time housewife. Just another day in Indian cinema.

Thankfully, that ship has sailed, or at the very least, it has raised its anchor. Over the past couple of years, we’ve seen a slight shift in trend. Earlier this year, Jyothika starred in “Magalir Mattum”, a feminist movie about equality in a household. Nayanthara herself has been starring in a few roles that actually requires her to do more than swing her hips — see Naanum Rowdy Dhaan. “Aramm” is one such movie.

In “Aramm” Nayanthara plays a District Collector named Madhivadhani. We don’t know anything about her, except that she’s a District Collector. Usually, I’ll be bummed by this. I like to know if my characters prefer chocolate or vanilla ice cream. I like to know what books they read before they go to bed. The minute details can be the difference between a wonderfully penned, fully realised character and a one-dimensional plot device. But in this movie, it works. Because this isn’t a movie about Madhivadhani, but an event.

The event in “Aramm” is the rescue mission of a girl who fell into an open borewell, which I will get to in a second. The structure of the film is its weakest point. It starts off in the present day, where Madhivadhani is being interrogated by her superior. We learn that she did something a while back that has caused massive unrest among her fellow politicians. We then cut to a flashback. This is the story that actually matters.

The interrogation sequences are nothing but jibber jabber. Fluff for the sake of having Nayanthara on screen longer. Without it, our top-billed actress wouldn’t appear in the movie until we’re about 45 minutes in. Which is clearly a problem for producers of this film (and most films) who have dollar signs for eyes.

It is here that writer/director Minjur Gopi truly shines. We’re introduced to a family in a small village in the middle of nowhere. They live in a small house, with insufficient beds for every family member. The dad works as a painter, earning just enough for his family to get by. He wants his son to stay in school and hopefully, one day, improve his family’s condition. His son isn’t interested. Instead, he spends most of his time swimming and watching Michael Phelps YouTube videos.

The mom wants to buy a cake for her daughter’s birthday, but 500 rupees (RM 32) is too expensive. Manjur Gopi also does a good job in painting the rest of the village. This isn’t the slums you see in “Slumdog Millionaire” but it is still a hard punch to the gut, considering the biggest problem most of us have is our Wi-Fi speed.

Meanwhile, the villagers have gathered around the borewell, with no help whatsoever, trying to figure out if the girl is still alive. When all the authorities and medical personnel finally get there, it’s a surprise the girl is even breathing. The events may seem like an exaggeration for comedic purposes. Go on a holiday to India and you’ll see how real the ridiculousness actually is.

The rest of the movie focuses on the rescue mission. The depths people are willing to go (or not go) to save a child’s life. For the most part, it works. Some scenes are heart-wrenching; some are thrilling. But there are moments in which the movie’s tone shifts in a direction I hoped it wouldn’t. I absolutely hate it when movies become tear jerkers. I hate it, even more, when characters are reduced to crying props. Maybe I can’t relate because I wasn’t born and raised in an Indian village. Perhaps I’m ignorant, but do people actually cry LIKE THAT? Do people cry (loudly) and wail (loudly) and bang their foreheads with their hands (repeatedly) in these kinda situations? The sudden overwhelming melodramatic music, only makes things worse. When these kinda scenes happen – and it does happen a lot in Tamil movies – it takes me out of the movie. And what is supposed to be an emotional scene, becomes cringeworthy and annoying. A little subtlety and nuance go a long way.

Having said that, Nayanthara’s performance in this movie is commendable. Madhivadhani is a strong and highly rationale woman. She always maintains composure, even during the toughest of situations. But there’s also a vulnerability to her character. It’s not easy to play someone who’s always calm in her decision making, yet you know there’s a voice inside her that’s going Dear God, please help me. I’m falling apart. When Nayanthara finally breaks down at the end of the flashback, it is a superb, well-earned moment.

And then the movie cuts back to present for an additional 5 minutes of irrelevant political banter and a Nayanthara slow-mo walk like Kamal Haasan at the end of “Papanasam”. FML.