Apart from Petta and for very different reasons, Asuran (The Demon) was my most anticipated Indian film of the year. What can I say? I’m a fan of director Vetrimaaran and a fan of actor Dhanush, but more than that I’m a huge fan of the Vetrimaaran-Dhanush combination. The duo’s first outing together, Polladhavan, was an average entertainer, but an interesting one. Their brilliant second film, Aadukalam, sent shockwaves across Tamil Cinema and announced the pairing as one to keep a close eye on. But it was last year’s gritty and sprawling epic, Vada Chennai, that kicked my ass so hard, I lay unconscious on the hospital bed for two days straight. I was revived only by the scent of tickets to another screening of Vada Chennai that a friend held in front of my nose like a boxing coach would with smelling salts. My love for that film runs deeper than Russia’s Lake Baikal.

So, don’t mistake it for hyperbole when I say I walked into the opening night screening of Asuran feeling both nervous and excited, the kind of anxiousness you feel walking into an event film or a big football match. There’s always the chance of being grossly disappointed with the end result. Thankfully, I’m happy to report that the film, in true Vetrimaaran-Dhanush fashion, grabs you by the throat and pulls no punches. It’s an utterly engrossing film that provokes thought and taps into your feral emotions, even if it’s not as good as the duo’s previous two films, nor the director’s other film, Visaranai.

The film opens with a shot of the moon reflected in the water — it’s still and peaceful. Then a foot steps through it, forming ripples and disrupting its calmness. This is what Asuran is about. It’s about a man who wants nothing more in his life than peace, for himself and his family, but keeps getting forced, pulled and dragged into situations of extreme violence. It’s a revenge-thriller with a simple premise. The foot we see in the opening shot belongs to Sivasamy (Dhanush), a lower caste farmer who’s on the run with his teenage son who had just killed an upper-caste honcho. We later learn that it’s an act of vengeance — members of that upper caste had previously killed Sivasamy’s oldest son.

Vetrimaaran takes this simple premise and through mostly good writing and fantastic filmmaking, delivers a picture that is always absorbing and at times uncomfortable film on what rage and violence can do to even the most peaceful of families and communities, while also asking, given the circumstances, what else can the oppressed do but be enraged and violent?

After some genuinely thrilling sequences of our protagonist and his family hiding and quietly trekking through the forest to escape the men who are hunting them, we get a flashback where we get acquainted with our characters and discover the chain of events that has led to this moment. Sivasamy lives in a tiny house by his farm with his wife and two sons. He wears a weathered face of a man who has seen some sh*t, his thick beard makes him look older than he is. It’s as if life has worn him down. Well, life and the amount of alcohol he consumes throughout the day. He’s a drunk — at one point he pukes on the floor of his living room — but a loving father and husband. There’s also an unusual calmness to him, mirroring his soft name, taken after a Hindu deity. He speaks to everyone politely and deals with problems that come his way diplomatically. Dhanush plays this character with understated brilliance. Look at the sadness in his eyes when his youngest son is rude to him. Even then, he doesn’t raise his voice. Her sort of just mumbles.

In an absolutely heartbreaking scene, Sivasamy gets down and the feet of every single villager, some of them are kids… and then walks away drained and exhausted. It pained me so much, I dug my fingernails deep into my armrest. (I must ask, what does that tell us about Dhanush as an actor? How many stars within Tamil Cinema would allow their on-screen characters to be subjected to such humiliation without immediately delivering a rousing one-liner / “punch-dialogue” or just beating everyone to a pulp? Would Rajini, Vijay and Ajith do it? Heck, would Post-Singam Suriya?)

His sons, on the other hand, are quite the opposite, despite his methods of nurturing them. Think of this interesting, anti-mass scene. When Sivasamy’s wife, Pachaiyamma (Manju Warrier who finds a balance between maternal warmth and vigour) gets threatened and manhandled by some thieving upper-caste folk, it’s the eldest son, Vel Murugan, not Sivasamy, who comes to the rescue and dishes out the beating. And it’s this beating that leads to Sivasamy’s humiliation, which leads to an even more enraged Murugan who goes on to slap the upper caste honcho repeatedly with a slipper, which leads to the upper caste folks retaliating which leads to… 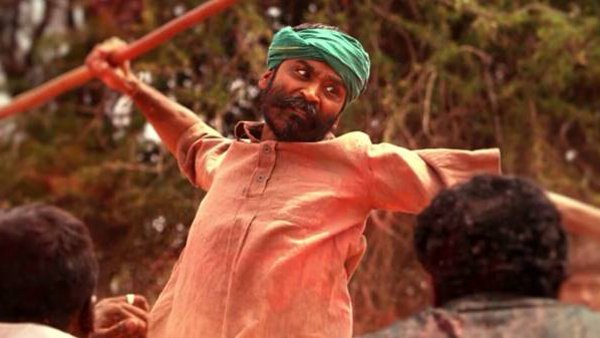 We eventually do get a Dhanush mass-y fight scene. To save his youngest son, Chidambaram, from getting hacked by the villains, Sivasamy has no choice but to turn into Asuran. God becomes Demon. And this is where my first gripe with the film comes: The transformation, while expected, feels a little too sudden. I know we’ve seen moments like this before, but they’re always in ‘Mass’ movies. Take Baasha for example. Despite Manickam (Rajinikanth) being a passive character in the first half, the film surrounding him was still larger than life. By the interval fight scene, we had already seen police officers stand up for him, cheered during the iconic medical college scene and watched him laugh after getting tied to a pole and beaten to a pulp.

Vetrimaaran is not that type of filmmaker. He paints and draws you into a very realistic, gritty world filled with equally realistic characters. So, when a “mass-y” transformation suddenly happens, it feels a little jarring. It bothered me during my first viewing of Vada Chennai as well, when Anbu starts kicking serious ass during the climactic action block. I couldn’t help but wonder if there were missing scenes that detail his transformation a little more. But it became a non-issue after a couple of viewings. In Asuran, it becomes a non-issue after the first fight, partly because you (or at least, I) sort of readjust my frame of mind to suit the slightly less realistic tone of the film, but mostly because the action scenes themselves are so bloody enthralling.

I remember reading somewhere that during the production of Thalapathi, Rajini was taken aback by just how much he was asked to emote and ACT by Mani Ratnam during fight scenes. Vetrimaaran appears to be one such helmer. The fights in Asuran may be stylistic when it involves Dhanush, but there’s also a level of grit and coarseness to it. They overflow with emotion. You see the rage in Dhanush’s eyes, you feel his pain, you get a sense of how hard he’s gripping his machete. The action scenes aren’t just rousing (though, by the end of it your heart is pumping loud and fast), they’re uncomfortable and untamed. There’s a ferociousness to it.

Every time Sivasamy swings the sickle, you wince and gasp. Every time he gets stabbed, you watch the film only through the slits between your fingers. There’s so much weight to the fights, you feel it vibrate deep within your bones. You feel the blood splatter through the screen. While you can’t help but stand up and cheer when the villains are getting their much-deserved comeuppance, when the oppressed and the ostracized start hitting back, you’re also weighed down by the inherent sadness these fights are shrouded in. You want the violence to stop… please. GV Prakash’s untamed and raging soundtrack ‘Bloodbath’ that accompanies the action blocks is one for the ages. In the second half, we get a younger Sivasamy, also played by Dhanush but with the unrestrained energy of a tiger.

With Vada Chennai, Vetrimaaran proved himself to be one of, if not the very best writer-director working in Tamil cinema today. Here, his writing is good once again. The dialogue is organic and interesting, sometimes very funny too. The line where Chidambaram compares the death of his dog to the death of his family members is superb. Asuran may not be an ‘EPIC’ (and it doesn’t have to be), but the echoes between past and present certainly add to the epicness of it. In the past, members of Sivasamy’s caste weren’t allowed to put on footwear (detailed in a gut-wrenching sequence that will make your blood boil), but in the present, we see him casually buying slippers out in the open, for his son to wear. The fact that he does so while on the run from the upper caste villains is beautifully woven in subtext. Times have changed, certain rules and customs have changed, but the oppression still very much exists.

Yet, something seems to be lacking. The last line in the film — “if we have farmlands, they’ll grab it, if we have money, they’ll snatch it from us, but if we have education, they can never take it away from us” — is an important one. But it’s more “telling” than “showing.” Perhaps we could have gotten a stretch where the youngest son goes to school and leads and ordinary life before he too, like his brother before him, is pulled into the darkness. The same can be said about Dhanush’s Sivasamy, whose story seems to be missing a few chapters. What happened between the time when he’s given a new lease on life by the Pasupathy character and the time when we first meet him? How did he become an alcoholic? How did life wear him down to such a degree?

What about those lengthy sequences of sheer thrills that Vetrimaaran is so capable of? One scene sees mother and daughter taking cover in a neighbouring village when a relative rushes in, in a panic, to warn them about Vaddakuran’s men who have arrived. We think we’re going to get a set piece ala Vada Chennai where Anbu and Padma’s brother run away from gangsters through the slums. But here, we just cut away. The next time we see these characters, they’re already somewhere else. It’s as if Vetrimaaran is deliberately holding back, as if to say, “I’m saving my big set pieces for Vada Chennai Part 2.”

But despite the film’s shortcomings, despite not being up to Vetrimaaran’s usual standards Asuran is still a thoroughly riveting film. I like all the characters and while some of them don’t have complete arcs, the performances more than make up for it. The action sequences are both heart-pounding and heartbreaking. GV Prakash’s songs aren’t intrusive, rather used to convey mood and feeling. Velraj’s cinematography increases the temperature of Vetrimaaran’s world. You feel the sting of the sun and the grime of the sandy villages. And Dhanush? What else can be said about the actor? He’s terribly underrated and the absolute best all-round performer in Tamil Cinema.