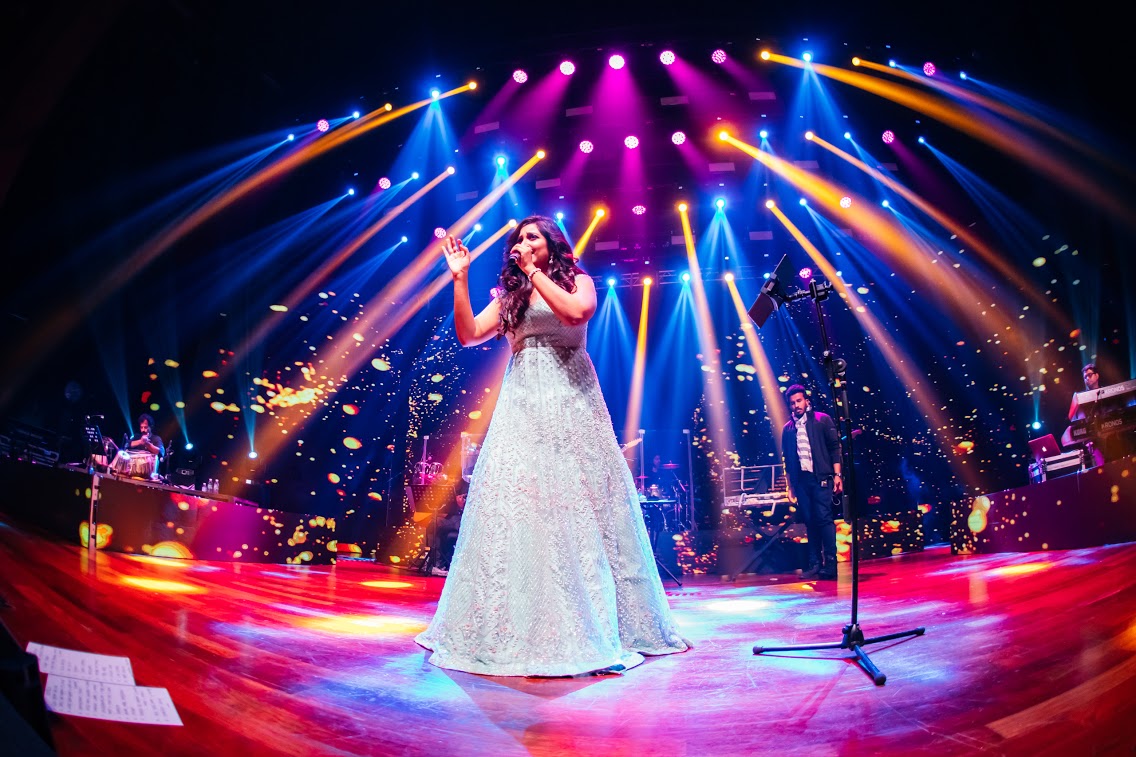 When we first heard that Shreya Ghoshal is coming to Malaysia, there was disbelief all round. Mostly because this insanely talented singer would be performing here for the first time, on her own.

This is why Shreya Ghoshal Live in Malaysia got us in a tizzy. Hitman Solutions, an events company that has made the leap into concerts certainly chose the right singer for their second project. This almost sold out concert held in Plenary Hall, KL Convention Center saw a diverse crowd comprising of Malaysians and foreigners, a testament to Shreya’s talent. One would expect a concert in Plenary Hall to be prim and proper, as it is one of the most exclusive venues in KL. Instead, we were greeted with long, snaking queues at each entrance. The process of scanning tickets and meticulously checking bags for contraband appeared to be taking longer than expected. There also seemed to be a shortage of volunteers. Concert goers seemed confused on which entrance to use.

Shreya Ghoshal Live in Malaysia was supposed to start at 8 pm. The audience began trickling into the hall slowly, but there was no announcement from the organisers nor an apology for the delay.

“Before we bring out Shreya…”

The emcee, Jazz Dhillon, appears fourty-five minutes later, and makes a few announcements, mostly about the steps taken in the face of the Covid-19 scare. Credit goes to the organisers for being very well prepared in the face of this possible pandemic.

Dear Patrons and Supporters, . We want to thank all of you who have got your tickets, and are planning to join us for Shreya Ghoshal Live in Malaysia on 23rd February 2020. . We wish to ensure you that the right safety and well-being of the audience, and of the entire team working on the show, are of utmost importance to us. . For more tickets information, visit www.myticket.asia or any Myticket outlets. . @StandardCharteredMalaysia @hitmansolutions @shreyaghoshal @eqkualalumpur #StandardCharteredMalaysia #ShreyaGhoshalLiveinMalaysia #ShreyaGhoshal #HitmanSolutions #EQKualaLumpur #Unequalled

The emcee then announces, “Before we bring out Shreya, we’d like to invite the Managing Director and Chief Executive Officer of Standard Chartered Bank Malaysia Berhad to give a speech,” Mr Abrar A Anwar delivers a quick speech, and then declares that a video on Standard Chartered will now be played. There was an audible collective groan from the audience.

At the end of the video and the lukewarm applause that followed, the emcee comes on stage, and says those dreaded words again, “Before we bring out Shreya,” Thankfully, there weren’t anymore speeches, but it was to introduce the opening act, YouTube sensation Tushar Joshi.

An hour and fifteen minutes after Shreya Ghoshal Live in Concert Malaysia was supposed to start, Shreya walks onto the stage. The crowd goes wild. 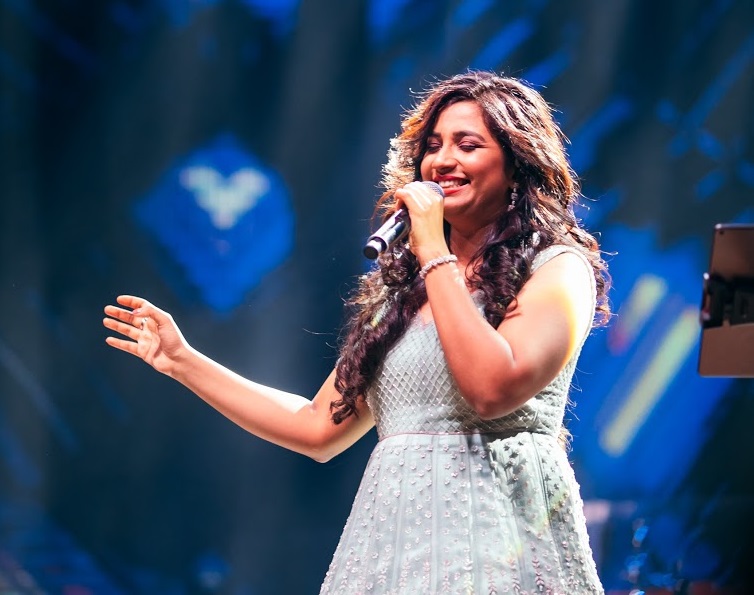 Not because she is glimmering in a beautiful gown à la Princess Elsa. Not because the stage lights are dancing perfectly to her first song, Sun Raha Hai. Not because the visuals on the background embody the feel of the song. Shreya’s voice is crystal clear. And it booms across the Plenary Hall.

Shreya entertained us with some amazing hits that night, Jadu Hai Nasha Hai, Tujh Mein Rab Dikta Hai, Jo Mere Dil Ko and Saans Mein Teri. Tushar joined her on stage for a few tunes, our favourite being Shukran Allah. She went down memory lane too, with the likes of Piya Tu Ab To Aaja. Shreya also sang a few glorious Tamil tunes like Mannipaaya and Munbe Vaa.

It was as if we are listening to one of her songs on Bose headphones. There is almost the illusion of Shreya lip syncing to the songs. If not for the minor microphone feedback that was heard in that first song, she could very well have been. Thankfully, the technicians rectified this quickly.

It was as if we are listening to one of her songs on noise cancelling Bose headphones.

The sound for the rest of the night was just spectacular. Shreya’s voice as a performing artist is as good as, if not better than her voice as a recording artist.

A huge part of this falls back on the organisers. Hitman Solutions evidently went all out to ensure that the entire audience could hear Shreya and the music in HQ. To hear her sing rearranged versions of her songs that sounded better than the original gave us chills. 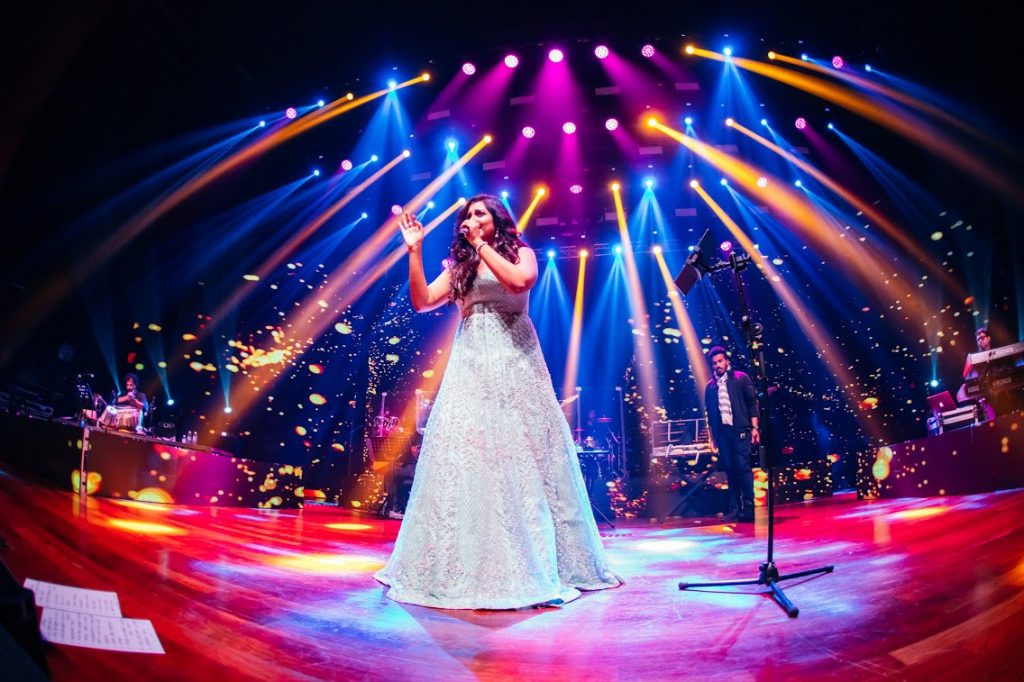 Hitman Solutions’ real strength, apart from the excellent sound team, is the stage itself. The stage lights danced not only to the beats of the song, but also to Shreya’s singing. At one point, she was belting out a raag, and the lights above her were in sync with the highs and lows of her voice. We were unsure if the audience was applauding Shreya’s vocal control, or the precise timing of the lights. There was no need for backup dancers either, because the stage lights cleverly took on that role.

Hitman Solutions’ real strength, apart from the excellent sound team, is the stage itself.

The background visuals were flawless. Three large LED screens created a semicircle that made up the backdrop of the stage. The musicians were ensconced in their respective stations, behind a 2 foot barrier, which also displayed the visuals of the background.

It is refreshing to see the next generation of Indian singers dance along to their tunes. Gone are the days of being a statue and singing in front of a music stand. Shreya didn’t break into the whole Dhol Bhaje routine when she sang it, but she danced along to a few tunes, including Pinga and Nanare Nanare. Her stage presence was simply exceptional.

She interacted well with the audience, encouraging whistles and cracking jokes. It was the circle of life, every song Shreya sang took us back to the movie it came from, buoyed by the lights and impeccable sound, while she was thrived on the energy we were feeding her.

every song Shreya sang took us back to the movie it came from, buoyed by the lights and impeccable sound, while she was thrived on the energy we were feeding her.

Just when we thought we had heard it all, Shreya talks about how she wanted to do something special for Malaysia. And then, the most fantastic moment of the night happens. Shreya Ghoshal sings Siti Nurhaliza’s Cindai! There is a collective jaw-drop from the audience followed by an insane applause. We don’t just appreciate this effort, Shreya. We now revere you for doing this!

Her final song, Mere Dholna Sun, from Bhool Bhulaiyaa, left us almost in tears of euphoria as she belted out the raags in quick succession. 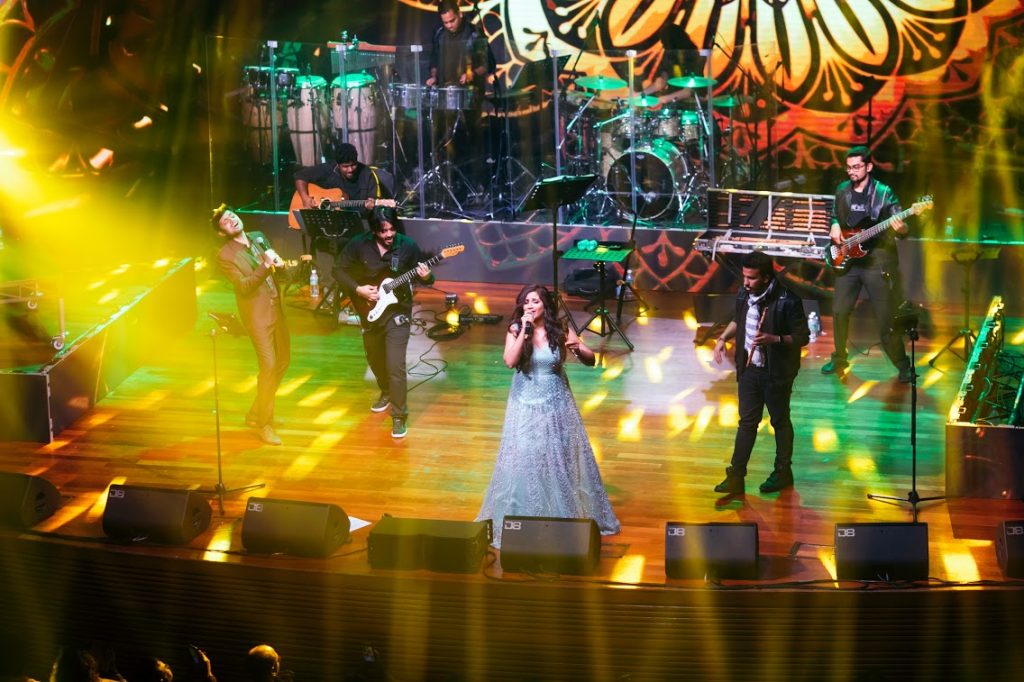 Shreya Ghoshal is nothing short of spectacular. She is a through and through performer, and the organisers have brilliantly brought out the best in her and the musicians. It was almost as if the show itself made up for the delay, which we hope the organisers will rectify on their next concert. Yes, we want more concerts with your superb stagecraft, Hitman Solutions!

The chills we felt at Shreya Ghoshal Live in Malaysia are going to stay with us for a long time. Thank you, Shreya.

All images are credits of Hitman Solutions.