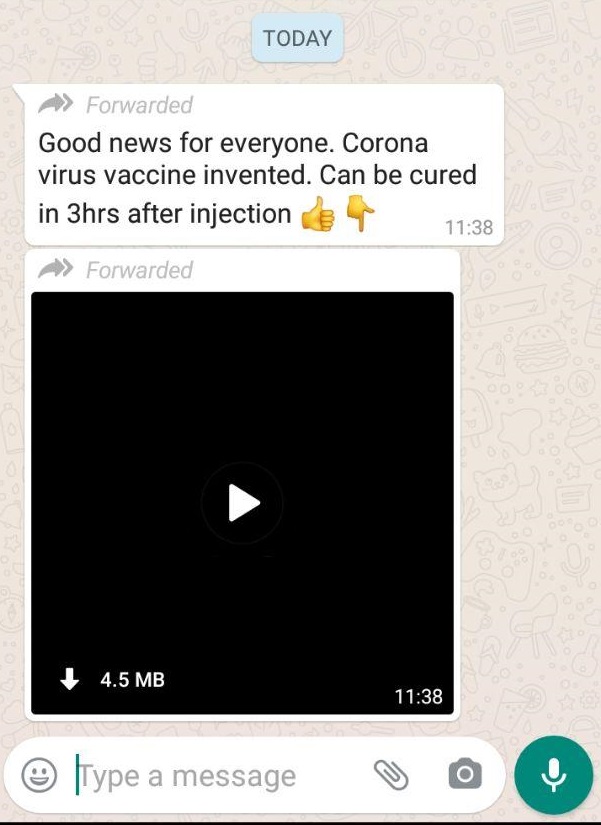 A challenge of the movement control order often isn’t being at home, it is the numerous nonsense forwarded messages that assault us on messaging platforms. Most of these messages are remedies or precautions against the virus, with almost none backed by science. We compiled a list of ridiculous, rubbish messages that have been circulating in the many WhatsApp groups we are in.

1. Onion, garlic, ginger and tumeric outside your sliding door

A person named Sister Sheila has released an audio note on what we first assume is a recipe for vegetable soup, before declaring that it needs to be kept at one’s sliding door for three days to completely eradicate Covid-19, which she then refers to as a bacteria.

This message says that all people need to be indoors after midnight as military choppers will be spraying pesticides that will combat Covid-19. Most importantly, people were instructed to bring in their clothes that were hung out to dry. At midnight.

3. Coronavirus vaccine invented, can cure within 3 hours of injection.

This message is accompanied by a video clip of an American news channel that is covering the preclinical studies that are going on with the vaccine development. It has so far only been tested on mice and guinea pigs.

4. Don’t come out from 7 am to 9 pm because Covid-19 will come directly from the sun

This audio clip and message was released from India. The country had a one day curfew yesterday. Someone with poor general and geographical knowledge decided to add in that the curfew covers all ‘east Asian’ countries and this includes Malaysia. Don’t even go out to dry your clothes, because the virus will beam down from the sun. Right.

5. Place cut onions/neem/turmeric in every room

In a time where we are limiting ourselves from leaving home to get groceries, is it wise to use those precious perishables as decorations in every room? There has not been one study to scientifically prove that placing onions/neem/turmeric will rid humans of the virus. Please don’t waste your supplies.

6. Malaysian Indians won’t contract Covid-19 due to the sambrani we use.

There are so many things wrong with this statement that we don’t know where to start. Do you honestly think some benzoin can stop a virus that has claimed almost 15,000 lives worldwide? Also, there is no proof that Indians cannot contract the virus. India itself has 396 cases at the moment, with 7 deaths.

Okay, this wasn’t a WhatsApp message, but it is by far the worst piece of false information, considering the source of it. The Malaysian Health Minister, Dr Adham Baba, announced on a nationally televised show that drinking warm water will “flush” the coronavirus down to the stomach, where digestive acids will kill it. This is, obviously, not true. Not only has this now become fodder for memes and comics, but the entire world now has another anecdote that originates from a Malaysian minister to laugh at.

This is just the tip of the iceberg. There have been so many half truths and whole lies that are being transmitted from one phone to another, even quicker than the virus itself.

These messages have two effects. The recipient either goes into a panic mode and starts foraging their larder for all the onions, garlic, and ginger they can find. Or they burst into laughter, and wonder to themselves, why are people so stupid?

Yes, if you’ve forwarded bull-faeces like this, congratulations, you’re the laughing stock of the many groups you’ve sent it to. What can you do now, you may ask. Absolutely nothing, except to stop spreading rubbish like this.