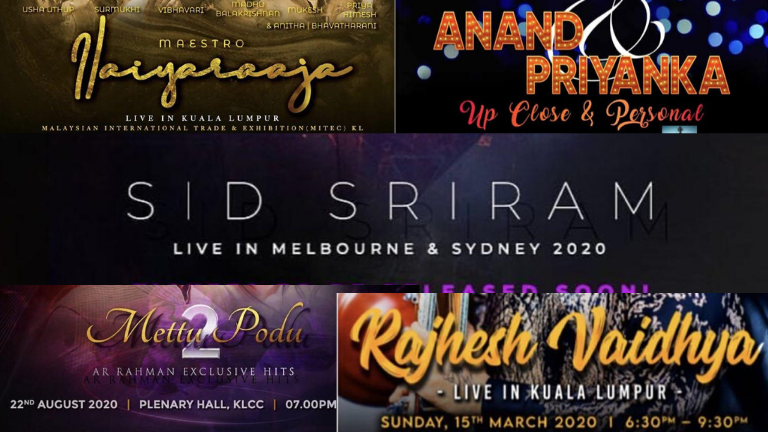 Remember the pre-corona days? The many nights of dining out, ad hoc travel plans and all those concerts. The new normal has now taken over, with every event and travel taking a back seat thanks to the virus that is ravaging lives.

Not many know what our lives will be like when the Movement Control Order (MCO) ends, which leads to another question. What is going to happen to the many Tamil concerts planned for the rest of the year here in Malaysia?

Health director-general Datuk Dr Noor Hisham Abdullah said earlier this month that the government will probably discourage mass gatherings for the next six months or one year. However, no directive has been issued thus far.

So far, three concerts scheduled for March have been postponed. Organised by Petaling Jaya based Carnatic music school, Swara Layam, Rajhesh Vaidhya Live in Kuala Lumpur was scheduled to take place on the 15th of March this year.

Five days before the concert, the organisers took to social media and various media outlets to announce that the event has been postponed to the 25th of July.

It was clearly stated in their press releases that Swara Layam will refund those who are unable to make it on the new date. 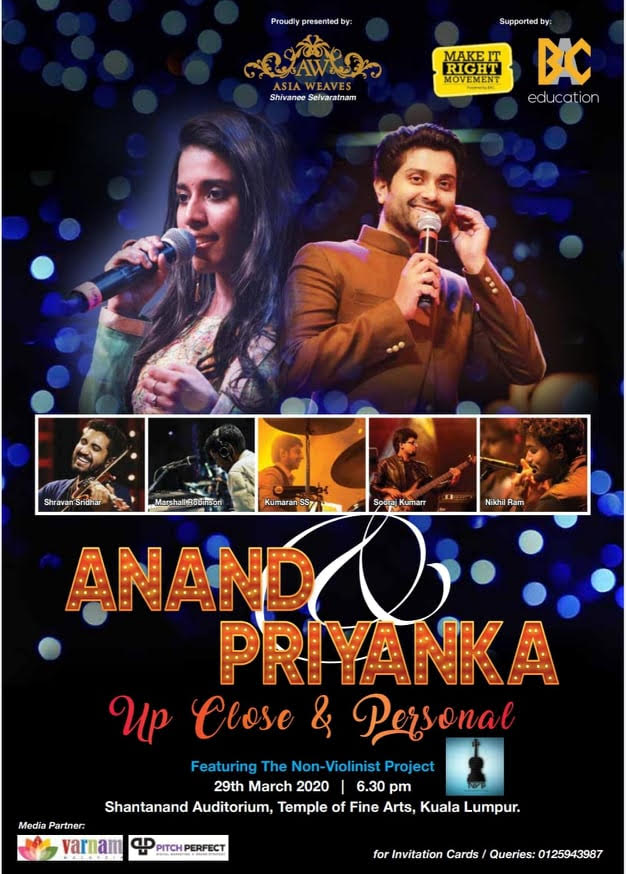 This concert featuring Super Singer talents Anand Aravindakshan and Priyanka NK was scheduled to take place on the 29th of March at the Shantanand Auditorium, Kuala Lumpur. After the government announced the Movement Control Order (MCO), the organisers, Asia Weaves, postponed the event to the 9th of August. The concert is scheduled to take place at the same time and venue.

With the postponement announcement, the organisers offered full refunds to those who could not make it. 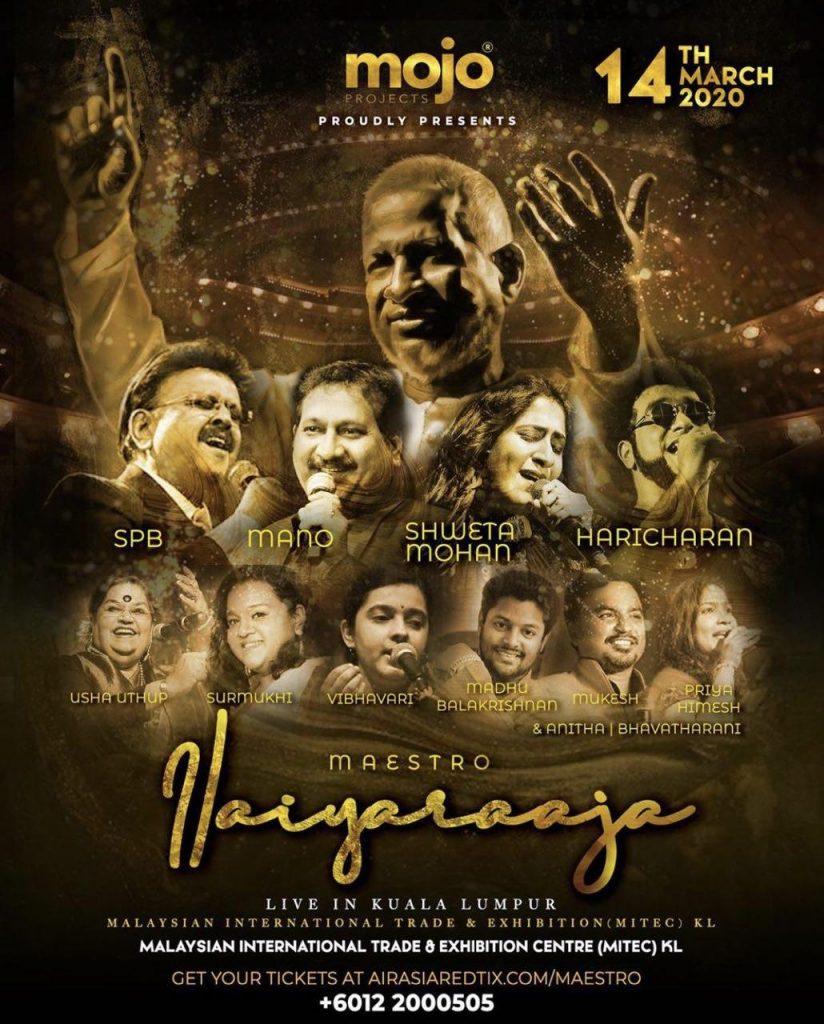 Purported to be the biggest concert of the year, Mojo Projects’ Maestro Ilaiyaraaja Live in Kuala Lumpur had the attention of all us Tamil music fans from the start of 2020. Come 14th March, it wasn’t just the legendary composer, we would also be entertained by SP Balasubrahmanyam, Mano, Haricharan, Shweta Mohan, Usha Uthup, Surmukhi, Vibhavari, Madhu Balakrishnan, Mukesh, Priya Himesh, Bhavatharini and Anitha.

Maestro Ilaiyaraaja Live in Kuala Lumpur caught our attention for another reason. Never before had we seen tickets for a concert reach figures as high as RM1800. The venue of Maestro Ilaiyaraaja Live in Kuala Lumpur, was slated to be Malaysia International Trade and Exhibition Centre (MITEC), which has a capacity of 47,700 visitors. The number of people expected to attend the concert is unclear.

It seemed as if everything was on track, with Shweta Mohan posting an image of the troupe rehearsing with Illayaraaja days before the event.

Late at night on the 11th of March, Mojo Projects broke the news that the concert has been postponed to the 20th of June due to Covid-19 concerns. Along with a video of the Maestro himself saying the same, the organisers issued a statement saying all purchases for the concert will be honoured for the rescheduled date in June.

For some strange reason, they have kept up the illusion of ticket sales on AirAsia Redtix. Tickets cannot actually be bought, as clicking the Buy Ticket button will only lead the user to a dead end.

Ever since they announced the postponement, Mojo Projects’ social media handles appear to have morphed into a Covid-19 advisory page. From advice for e-hailing and taxi users to the A-Z of the virus itself, they are taking the pandemic very seriously.

Interestingly, there was no mention of a refund for those who could not make it. Replying to a comment on the topic, Mojo Projects said that refunds will be studied on a case to case basis and they will have more information soon. 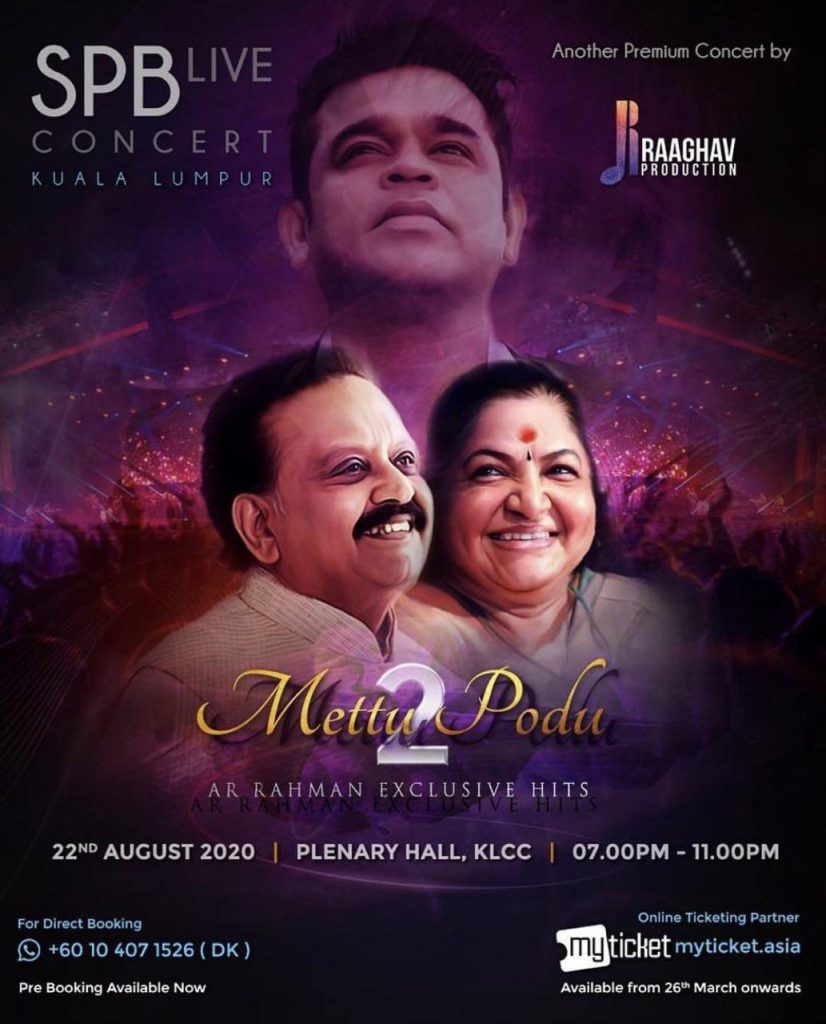 Announced bang smack in the middle of our first MCO, SPB Live Concert Kuala Lumpur – Mettu Podu 2 is scheduled to take place on the 22nd of August 2020. Keeping with the organiser, Raaghav Productions’ trend, the event will take place in KLCC’s Plenary Hall. The event will also feature Drums Sivamani and Suresh Peters.

The tickets to this event are already on sale.

The organisers have assured concert goers that tickets purchased will receive a 100% refund if the show is cancelled. If the show is postponed, the same ticket purchased can be reused, according to Raaghav Productions. They have yet to release any statement on refunds in the case of postponement. 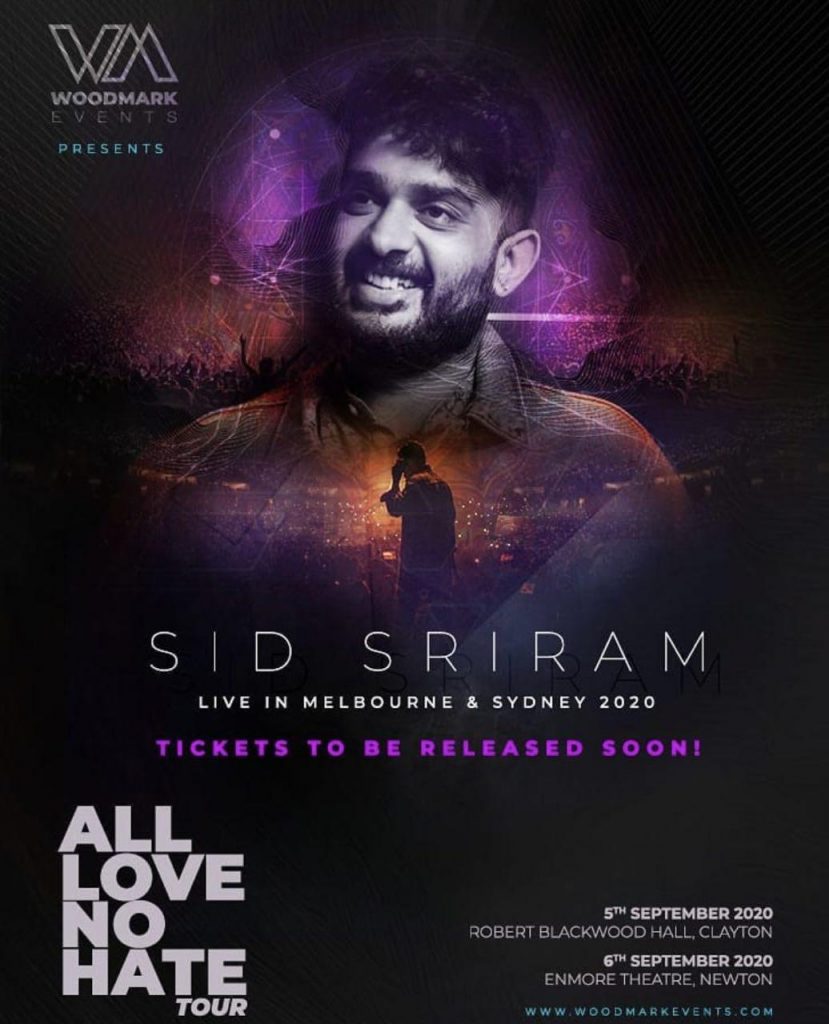 Why are we bothered about a concert that’s being held on another continent, you ask? The organisers of Sid Sriram Live in Melbourne & Sydney 2020 are the Malaysian events company, Woodmark Events. The two concerts are slated for September 2020, but tickets have not gone on sale just yet.

Our hearts go out to these organisers, some of whom have heavily invested in these events. But as consumers, we need to put ourselves first.

Many of us have purchased tickets to watch these big names perform, but when the organiser mentions nothing about refunds, it puts us on the edge. This adds to the anxiety that has already built because we are unsure if we will have our jobs in the next few months and that money spent on a concert earlier this year seems to be better channeled towards necessities.

With the many restrictions on mass gatherings that are going to come about in the next couple of months, the fate of these concerts is in limbo. We can only assume that most of them have taken the wait and see approach before calling off or further postponing the concerts.

It isn’t just the mass gathering to consider, it is also bringing over the artist from another country along with their team. Will non essential travel be possible?

It goes without saying that this is an unprecedented situation. It is a waiting game for all of us. A word of reassurance from the organisers about the event and the refunds would be a welcome respite in these tough times.

A word of reassurance from the organisers about refunds would be a welcome respite in these tough times.

As we look for an Illayaraaja tune on Spotify to ease our anxieties, we cannot help but wonder. Will we return to the ease attending a concert without worrying if the person beside you is infected with a deadly virus?