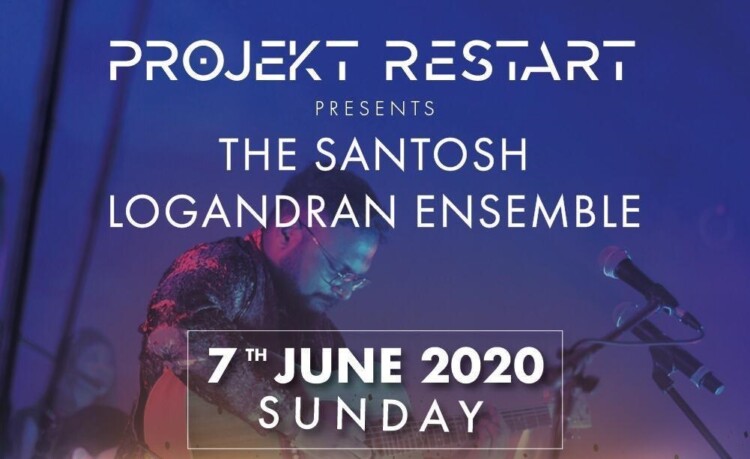 After a successful outing two weeks ago, ProjeKt Restart is back with their next offering for live music fans, this time featuring The Santosh Logandran Ensemble on Sunday, the 7th of June 2020 at 8.30 pm.

Organised by RK Projects and Sound Innovations, this event features a live band perform in a stage setting while their fans stream the event on Sound Innovations’ YouTube and Facebook channel. Best known for being a breath of fresh air in the world of Malaysian Tamil music, Santosh is currently riding high on the release of his debut album, In Pursuit of Santhosham. The sound engineer turned singer has been known to infuse his eclectic brand of sounds into the music he makes. His tunes Yen Di and Rani from his latest album have dominated music streaming applications and radio air waves.

All the musicians in The Santosh Logandran Ensemble are big names in their own fields. Santosh and Ashwin are part of the popular Malaysian band Nadir, while the former and Hariraam are part of renowned sitarist, Samuel J Dass’ band, Swarasia.

The Santosh Logandran Ensemble will be performing a mix of covers and original songs. The band also has a few surprises in store for fans, with covers or rare songs, and a mix of classical fusion. Fans will be in for a treat come Sunday night, as the musicians perform for a solid hour, non stop.

ProjeKt Restart welcomes independent bands in Malaysia to use this platform to showcase their talent, as the nation eases its way out of the movement control order.

RK Projects and Sound Innovations aim to showcase local talents and their independent as well as covers of existing tunes with ProjeKt Restart. The venue and equipment are provided by Stanley Edwards of Sound Innovations.

Come Sunday, the sheer amount of talent streaming live on ProjeKt Restart is going to be like nothing you’ve seen before. Be there.