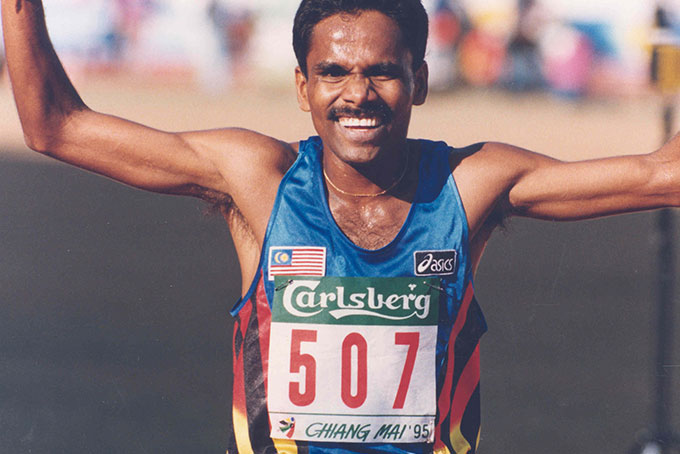 Datuk Ramachandran Murusamy has distinguished himself in many ways; for once upon a time, he was the only King Of Southeast Asian Athletics (Long Distance) runner.

Yes! Records are meant to be held with the correct strategy!

A track and field athlete, competing in the long distance category, Ramachandran made headlines for Malaysian athletics in the 1990s. His running career has not been one without the highs and lows, yet his unwavering sportsmanship and love for the sport has certainly put him on the country’s mark as perhaps one of the greatest of all time.

Ramachandran received a total number of twenty-three national records set during the 1990s, especially in mid-and long-distance races, remaining intact to date. The list of his accomplishments was dizzyingly long.

He ran his best run quest for an extraordinary 10,000-meter win and dedicated the victory to his wife, who died in 1999 due to cancer.

Run with your heart, mind and your body!

The Malaysian legend Ramachandran dominated the races by taking home a total number of 10 medals, where the first 2 silver medals were won during the 1987 SEA Games, following up with another 8 gold medals in the SEA Games from 1993 till 1999. Each and every SEA Games, the legend never failed to grab those prestigious medals. The multiple SEA gold medalist, is also still holding the current SEA Games Record holder 5000m with a time of 14:08:97 which was held in Singapore in 1993.

Ramachandran has carried the torch for Malaysia in every sense of his achievement.