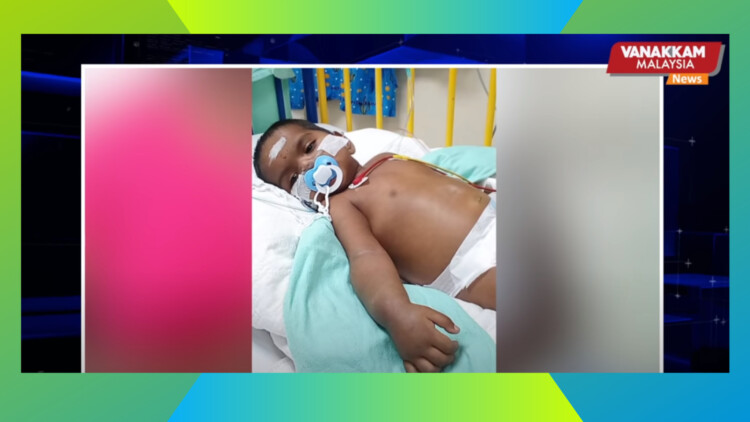 Rasika a 14-month-year-old baby who is suffering from kidney failure is in dire need of urgent financial help for her medical treatment.

The toddler is taken care of by her mother Mathavi whom is in tears as she seeks financial help for her daughter. According to Rasika’s doctors, the effects of both her kidneys were present since she was born. The child’s medical severity escalated quickly due to her young age.

The complications Of KIdney Failure Could have a grievous effect to the infant’s life.

Currently, Rasika is seeking medical treatment at Hospital Selayang under the Intensive Care Unit (ICU) and doctors have notified her parents that she needs a kidney transplant as soon as possible.

First the doctors had to insert tubs in the neck of the infant for her treatment, but in fear of her age, they later inserted the tubs to her stomach. It’s distressing to know the amount of pain the child has to endure as she battles for her life.

In an phone interview with Vanakam Malaysia, Mathavi, Rasika’s mother has expressed that the daily meagre wage of her spouse is insufficient to sustain the overwhelming medical expenses with him now forced to forgo his job to take care of his 2nd child with down syndrome.

Rasika’s medical costs is putting a huge strain on her family with a potential of even losing their home as her parents are unable to pay for their house mortgage. Their unfathomable state is currently in a dubious questionable scale as they fight through the ordeal that has befell upon them.

To those intending to help baby Rasika, kindly reach out to the contact details below: