Remember The Motorcycle Milk Vendors? Kesavan Vanniyan Remains One Of The Very Few Ones In Penang 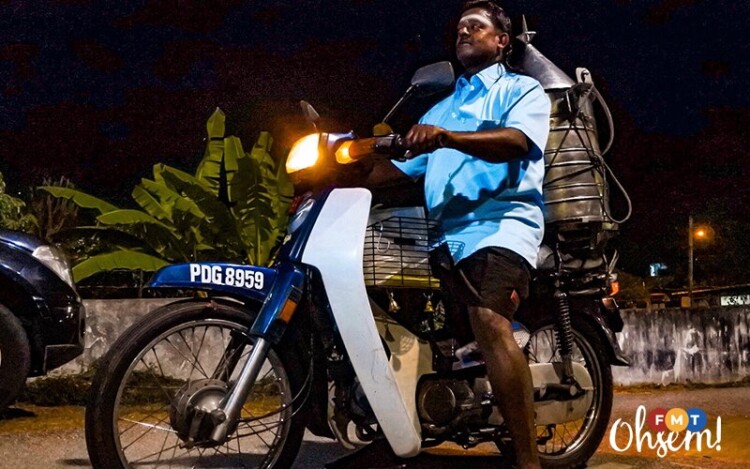 Milk vendors for many years had populated some of Georgetown’s busiest streets, but the scene is changing now, with only a few vendors remaining.

Remaining as one of those few, Kesavan Vanniyan, 38 shared his 19 years of experience being a milk vendor. He rides a motorcycle with stainless steel milk barrels attached to deliver fresh milk to his customers’ homes.

Even though it sounds hard, he doesn’t take long to complete a customer’s order, which is likely due to the fact that he’s been doing it for nearly two decades.

Kesavan, who is 38 years old, is said to be one of the very few left milk vendors in Penang.

The majority of his customers are elderly folks who are loyal to the seller and have a close relationship with him.

Kesavan, who owns a dairy farm in Penang Waterfall and has been selling milk since 2002, explained how it all began.

He said to FMT;

I used to have my own milk seller who came to pick up supplies every morning at the dairy farm. However, due to certain problems, I had to move to a dairy farm in Balik Pulau. The location is quite far, causing the milk seller to stop.

Kesavan was left with no choice but to do the process required by himself including milking the cows to packing the fresh milk and making home deliveries.

Honestly, it is not an easy thing because it has to go through several processes. I was fortunate to have a kind -hearted friend who was so patient to teach and guide me through the whole process. Since then, I have been a milk seller.

Every day, Kesavan manages to sell 20 to 30 packs of fresh milk for RM6 each. He currently has 15 cows and milks them himself, but he still receives assistance from N.S.G Freshmilk, a dairy farm owned by a friend.

His daily routine begins at 5.30pm, before delivering the fresh milk to his loyal customers around Penang.

That being said, since there were just ten vendors living in Penang, Kesavan saw the market looking bleak.

Kesavan, like the thousands of small business owners were severely impacted by the Covid-19 pandemic, when consumer orders were dwindling, but he refused to give up and was able to keep the company going.

Many Malaysians may have forgotten about the existence of milk sellers. As time goes on, we are more and more forgotten and it is quite difficult for me to continue to reach out to customers.

Despite the fact that it is said to be a dying industry, the sight of milk vendors with their steel barrels is still fresh in the minds of Penang residents.

Do you live in the Penang area, especially in the areas where Kesavan delivers? You can make your orders for fresh milk by calling him at 019 4320336.

Remember The Motorcycle Milk Vendors? Kesavan Vanniyan Remains One Of The Very Few Ones In Penang