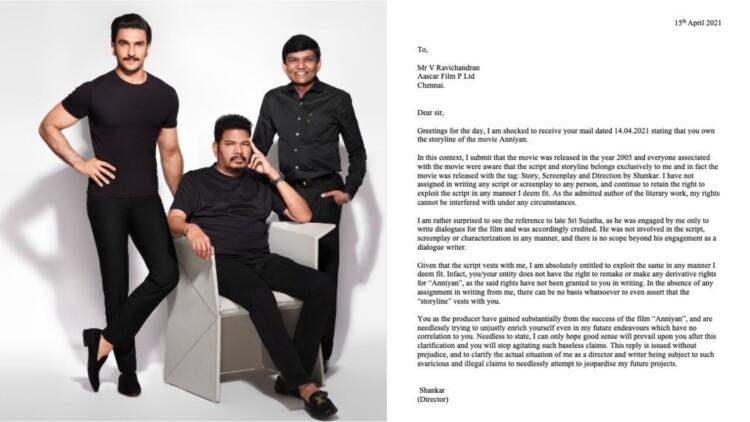 OMG..OMG.. Who would have guessed this combo, man? Shankar and Ranveer Singh for a hindi remake of Anniyan?

I’m totally flabbergasted at how Anniyan will turn out with Ranveer Singh in it. If you’re a fan of his, you’ve probably seen Khilji’s histrionics in Padmavat. He is an actor known not only for his outshining fashion sense but also for his exceptional acting prowess.

Shankar, on the other hand, is well-known for his big-budget movies. In all honesty, he makes dreams come true. Enthiran was not just a movie, but one of Kollywood cinema’s many masterpieces.

To be honest, seeing the dashing Ranveer in Shankar’s Anniyan in Hindi is going to be a miraculous one.

While this is Ranveer Singh’s first collaboration with the director, it appears that the film has already landed itself in legal trouble. V. Ravichandran, Anniyan’s producer, has criticised Shankar for announcing the film without his permission, thereby making it illegal.

In his letter to the director, the producer stated that he is the sole owner of all rights to the film’s script and that making it in Hindi without his knowledge is illegal and unprofessional.

To this, the director however responded,

I am shocked to receive your mail stating that you own the storyline of the film Anniyan.

Along with Shankar’s fans, Anniyan assistant director Arivazhagan and director Chimbu Devan have expressed their support on Twitter using the hashtag #ISupportDirectorShankar.

As a creator @shankarshanmugh has every rights to remake his film in any language. Also out of all his films this Anniyan is the best in terms of the concept which covers all his other films .. Self discipline 👌👍💐 #ISupportDirectorShankar

There are always two coins to the story. We hope the matter can be resolved amicably by both sides. Anniyan is a Kollywood masterpiece, hence, having a Hindi remake would give credit to this blockbuster movie a chance to actor Ranveer to prove his role as ‘Anniyan’,  nailed by the legendary Vikram.