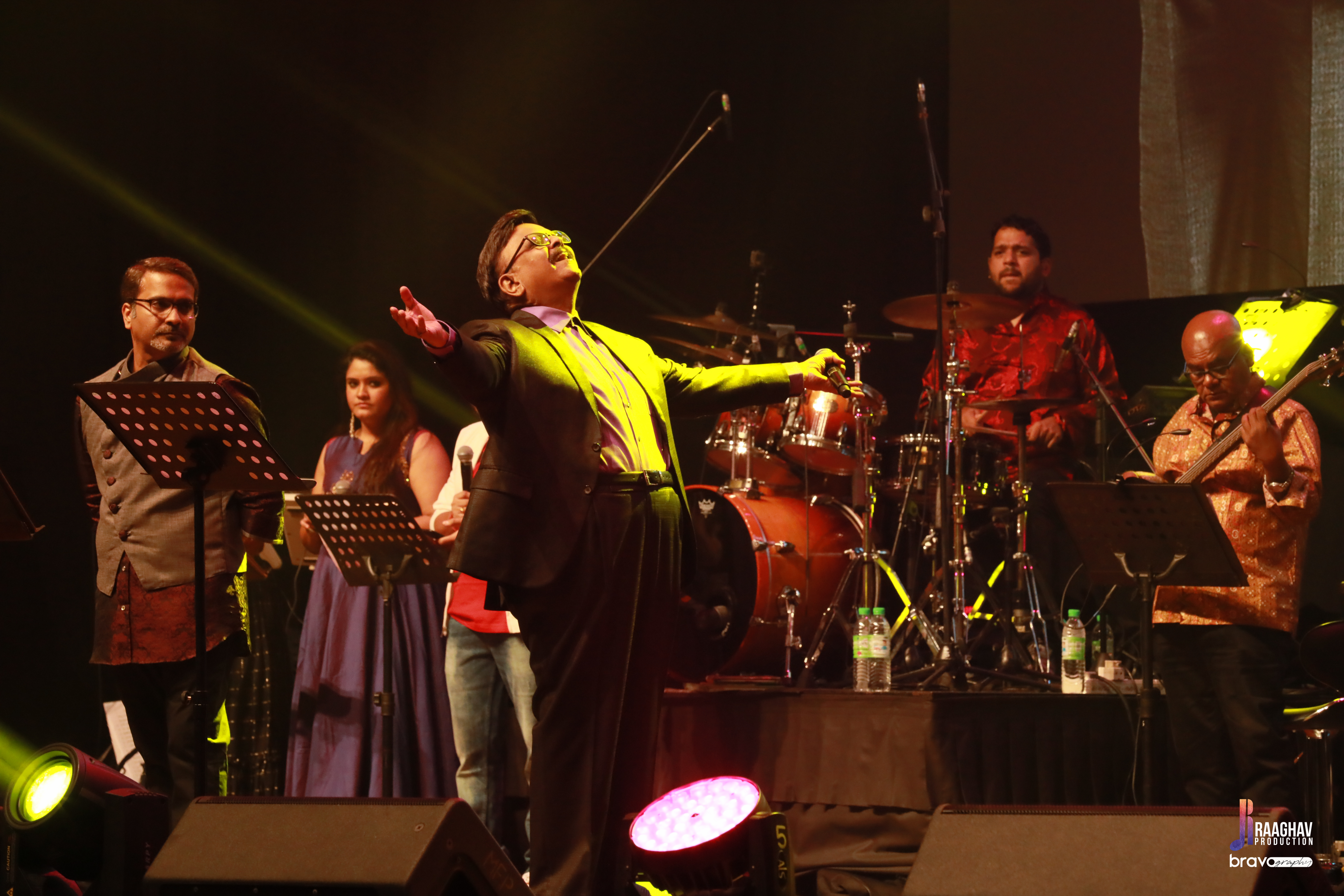 When we heard that the legendary SP Balasubrahmanyam will be making his way down to Kuala Lumpur for a concert, we knew we just had to be there! SP Bala was down with Charan, Swetha Mohan, and SP Shaliaja to belt out some old school AR Rahman hit compositions. There’s no way to go wrong with that right? Of course not.

‘SPB Live in Kuala Lumpur’ by Raaghav Production was a sell-out concert – and the KLCC Plenary Hall was packed and bursting with both SPB and AR Rahman fans. We had high expectations for the show, and we’re happy to say that the concert met those expectations and we had an unforgettable night!

Here are some of our personal favourite moments from the show: 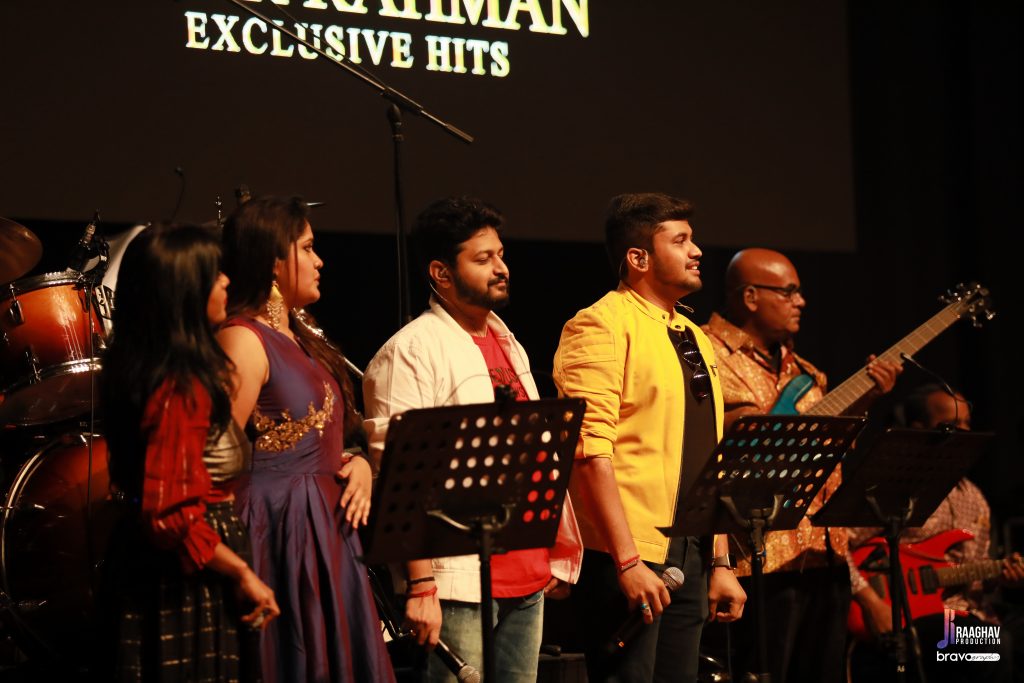 The concert started with SPB’s prodigies setting the stage on fire with the classic hit, “Urvasi”, which was mashed up with “Chikku Bukku Railey”. The talented quartet was led by Abishek (Charan’s cousin) and Aravind (Abishek’s best friend and playback singer), along with Latha and Swagatha. They cheered up the crowd with their high energy performance and set the mood for the entire night.

When SP Bala walked on stage, the crowd exploded into cheers and applause for the man of the night. At 72 years old, SP Bala still makes quite the entrance – full of swag and charisma. He’s also wittier than ever. After greeting the Malaysian crowd, SPB gave us the perfect opening song, Superstar Rajnikanth’s “Oruvan Oruvan” from Muthu. 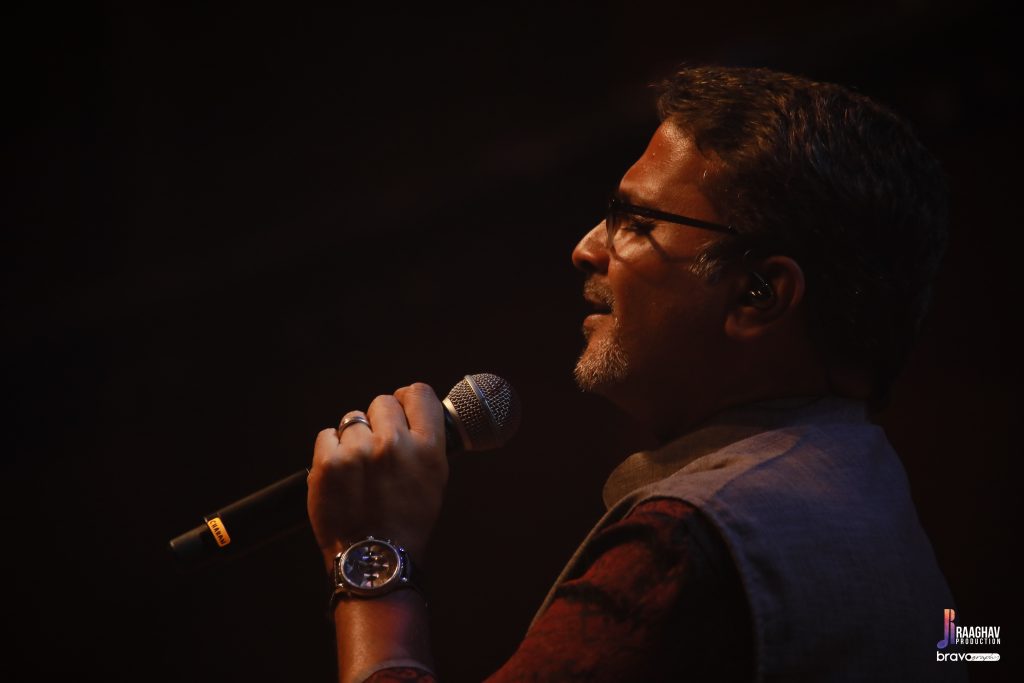 Charan started by giving us hints about an iconic bass line that was created by Keith Peters for AR Rahman. It was the most popular bass line back then – one that everyone was trying to pick up. Charan added that this particular song was also one of his best work.

When he started singing “Kaadhal Sadugudu” from Alaipaayuthey, I swear my jaw just dropped. It felt so real, so true and genuine, I could literally picture Madhavan and Shalini dancing next to him with their blankets and bedsheets. Absolutely beautiful. In fact, if I could ask for an encore performance (no offense), it would probably be this one.

One hurdle that has always been there for Charan was the fact that he sounds 99% like his father. While it is a gift, it is also a curse – and Charan openly admits it. He jokingly complained to the audience about how he auditioned for a song in Minsara Kanavu, never heard back from them, and eventually found out his father had sung a song in the said movie and won a national award for it.

He also told the crowd that when they buy tickets to an SPB concert, it comes with free gifts like himself and the chorus quartet. 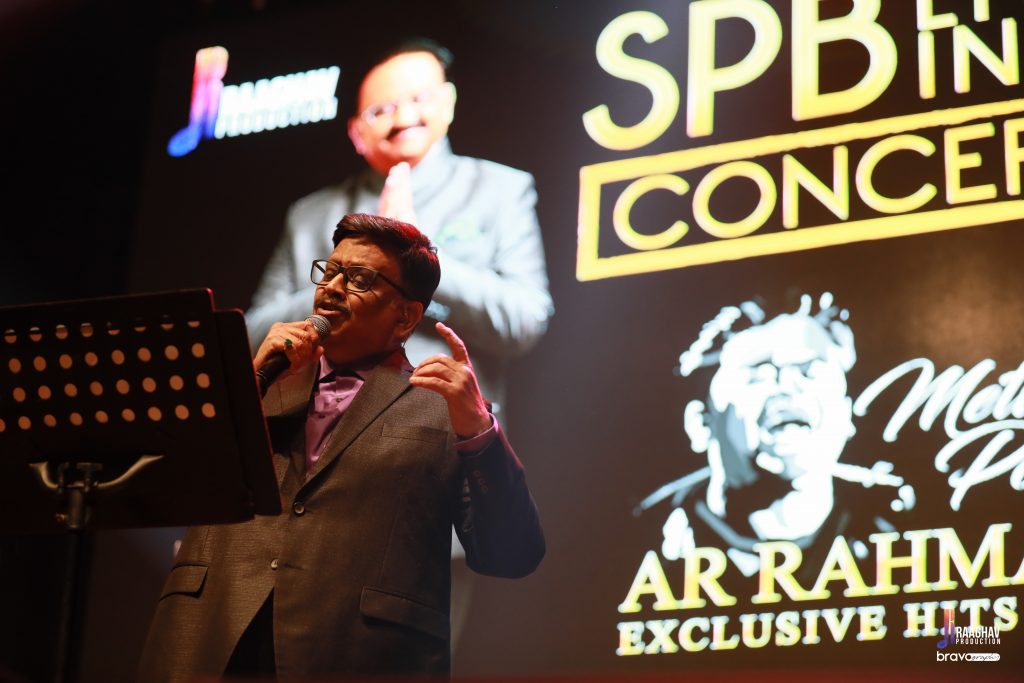 I was a huge fan of Prashant back in the 90s. Jodi is one of my all time favourite movies and I love every song in it. My ultimate favourite is “Velli Malare”, where Prashant and Simran are donned in traditional, royal outfit, professing their love in a castle. That, coupled with the vocals of SP Bala and Mahalakshmi Iyer was simply amazing. Every time I listen to the song, SPB’s entry with “Ilanthalire, Ilanthalire”,  always gave me goosebumps. To watch him singing the song live, his vocals hitting all the right spot, it was perhaps one of the best moments of the night for me.

Another one of my all-time favourite. AR Rahman’s music in the movie Duet is perhaps one of his best works ever. Every song in the movie is timeless and makes you all emotional. I could barely contain my emotions when SPB sang “En Kaadhale En Kaadhale”, accompanied by the lovely saxophone bgm. It was honestly so beautiful that I had tears in my eyes towards the end.

One of the best things about SPB is also how meticulous he is about his pronunciations in his songs. Every time I listen to “En Kaadhalae”, I always look forward to him saying “siluvaigal, sirahughal”, and I’ll never get over how perfect it sounds. I don’t even know what those words mean – but they just sound so beautiful whenever he says them. 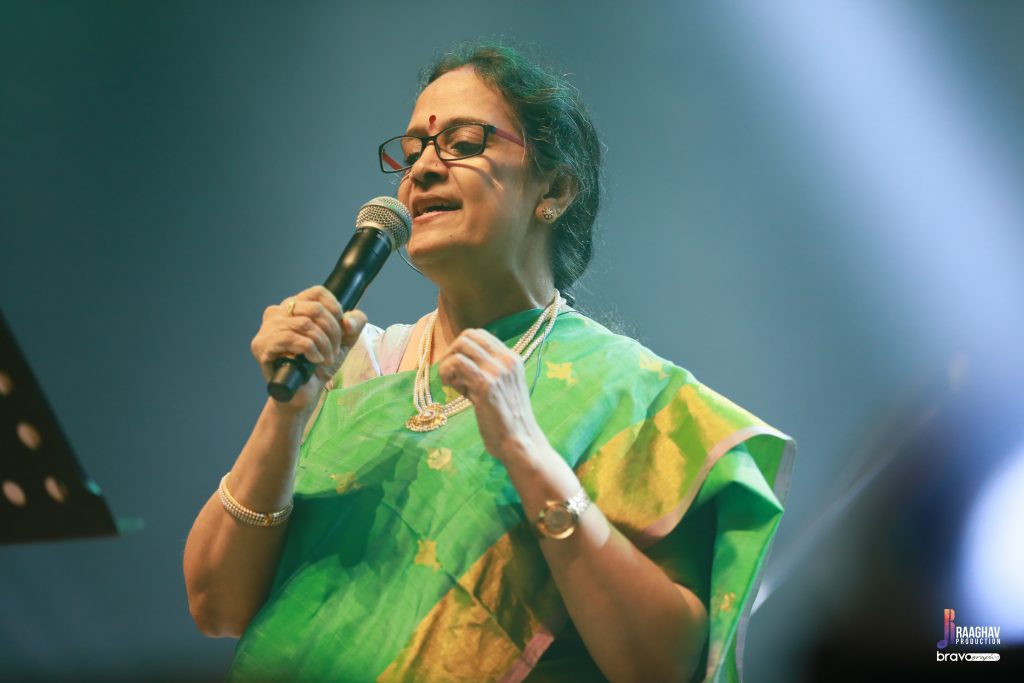 Shailaja started the concert with a few slow numbers. She took it slow as she accompanied SPB with “Velli Malare” and lended her vocals to “Mukkala”. After that, she took the mic and said, “Everyone is singing fast songs, I want a fast song too,” – and went on the rock the concert with “Hello Mr. Ethirkachi”. She did a fantastic job, and she was super cute too! :D

8) The girl who took down the hall with “Konjum Nilavu”

So, there was this girl at the side of the stage, singing along with the chorus group that night. She looked timid and shy. When she walked centre stage and took the mic, I honestly didn’t think much of it. Then the music kicked in, and she started singing “Konjum Nilavu,” – and boy was everyone in for a surprise! She hit the chorus and cried “Chandralekhaaaaaa”, her powerful vocals filled the entire KLCC Plenary hall and we were all shaken to the core. Who is this girl? Where are those vocals coming from? We were so not prepared for that!

Edit: We have learned that the girl’s name is Swagatha Krishnan – do look out for her :) 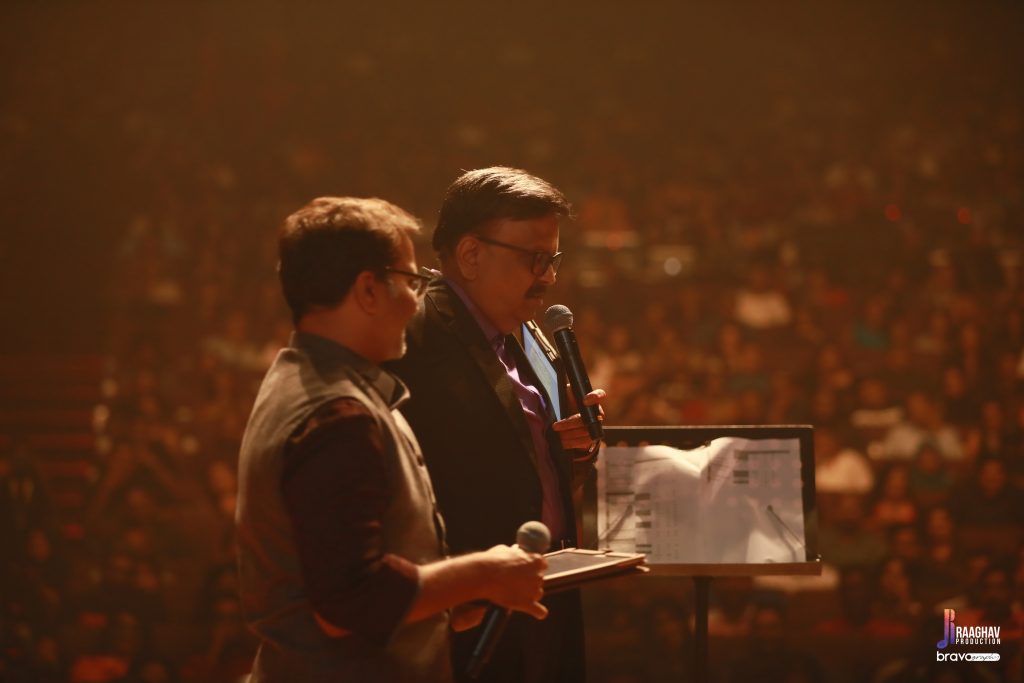 This one was a real treat for all SP Bala and Charan fans. Both father and son shared a bit of banter and had the crowd laughing – their wit and sarcasm was so entertaining to watch. After that, they went on to belt out an emotional duet, “Ennai Kanavillaiye” from Kadhal Desam. However, their rendition was more playful than emotional, with SPB prodding his son as they sang. 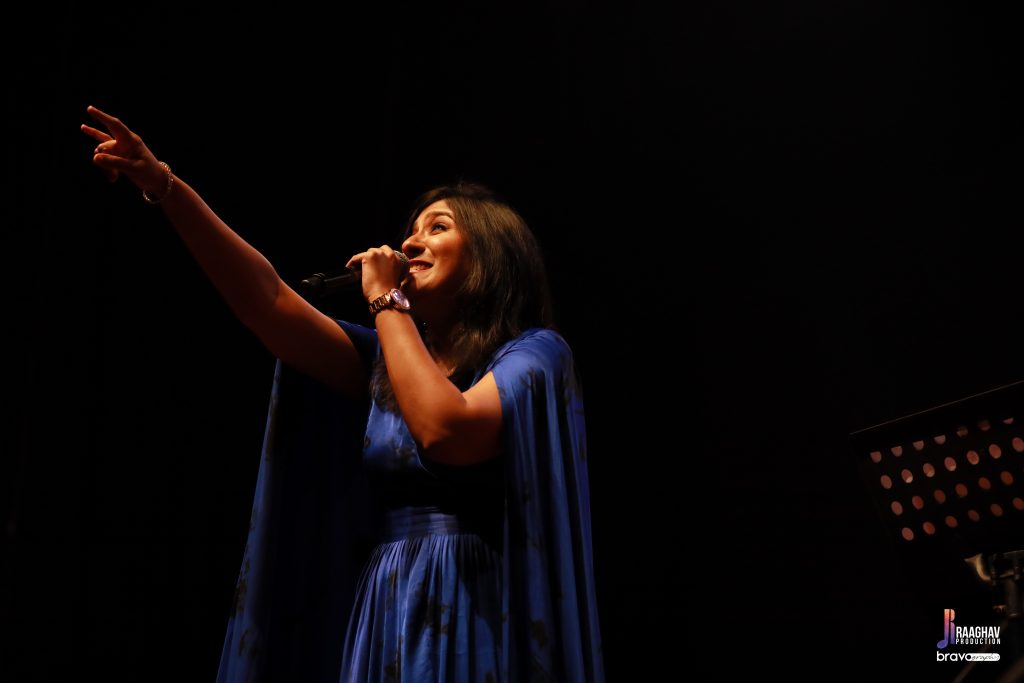 Swetha Mohan donned a beautiful, long, navy blue gown for the show. As she walked, the bottom of the gown trailed behind her and swept the floor. SP Bala joked that whenever Swetha Mohan is performing, the organisers don’t have to get a cleaning service, because she cleans the floor for them.

Swetha Mohan’s super sweet vocals sounded so beautiful when she sang this romantic number from Gentleman. Aravind Srinivas’ vocals complemented her voice so well – and it was one of my personal favourite performances of the night. 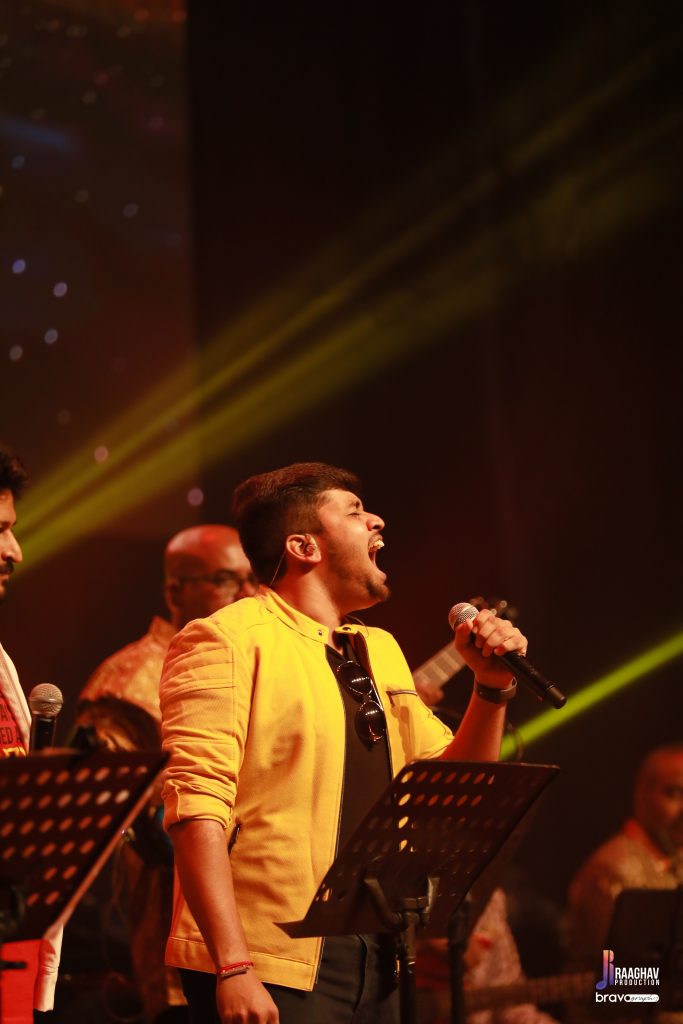 We all knew Aravind as an up-and-coming singer who has done playback singing in a number of movies. But what we didn’t know is that he was the one who sang the title track for Vishwaroopam 2! Abishek urged him to sing a few lines from the song. Aravind was hesitant at first, but then he did (and we’re so glad he did), and it drove the crowd wild with applause!

I mean, I don’t even have to tell you how beautiful this duet was. One of SPB’s most iconic songs, he saved the best for last. SPB’s performance was impeccable, and Swetha Mohan hit all the high notes flawlessly. 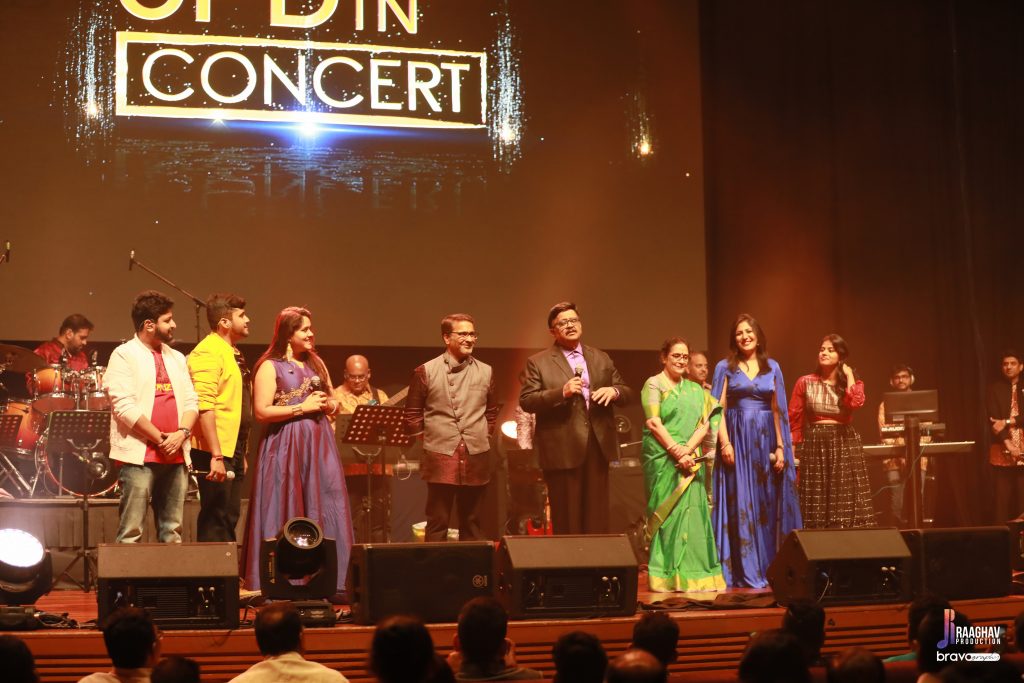 It was the perfect end to the night – with SPB, Charan, Swetha Mohan, SP Shailaja, the chorus quartet – everyone was onstage together to give us the perfect closure of the night! You kind of have to be there for this one. I think his name was Om Prakash, and he was in charge of placing and removing book stands on stage. SPB tried to interact with him on a couple of occasions, but he nonchalantly walked off stage and wasn’t aware of it. By the end of the night, he became a crowd favourite – and SPB even said that Om Prakash stole his thunder. It was hilarious!

Considering the fact that this is only Raaghav Production’s second venture, we think they did a great job with concert. The line-up of singers along with the choice of songs were perfect – we have no complaints. Definitely looking forward to the next one! :)