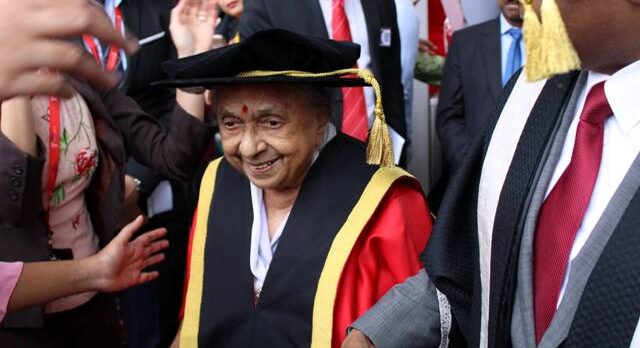 Standing at just four feet, eleven inches tall, Mother Mangalam was not a stereotypical hero. At 94, her generosity is an essential personality attribute for someone to have, and the tale of Mangalam will tell you about it.

Datin Paduka Mother A. Mangalam or fondly known as ‘Mother Teresa’ of Malaysia has been a “mother” to thousands of Malaysian orphaned children. Born in Singapore in 1926, she was educated at the Raffles Girls’ School and inspired much of the work she did as an adult.

World War II had a significant impact on Mother Mangalam’s life. She witnessed the suffering and starvation everywhere and vowed to devote the rest of her life to helping children.

To say that, she began educating kids from impoverished backgrounds at the age of 22 with the help of her spiritual guru, Swami Satyananda. In 1949, they co-founded the Pure Life Society, which has since cared for thousands of orphans while fostering multiracial and multireligious understanding through seminars, conferences, and programs.

A total number of 2,000 children of all races and backgrounds had been accommodated and nurtured at the Pure Life Society (PLS) home. The home was proudly known as the country’s first non-government orphanage which was established in 1952.

Mother Mangalam has won a string of awards for her immense contributions to humanitarian works. Among them is the Merdeka Award, which she earned in 2010 for her outstanding contribution in fostering the welfare of the underprivileged and cultivating national unity. In addition, Taylors University bestowed an Honorary Doctorate in Humanities for her contributions in year of 2018 as well.

Despite being honored for her contributions, she never wavered in her commitment to serve the needy, by showing her dedication and compassion. Her concern for the vulnerable and needy was greater than her reputation which gained in the nation.

Mother Mangalam loves to write poems and she published a poetry book entitled Dew Drops On A Lily Pad. The Pure Life Society (PLS) has been the editor and publisher of the Dharma Quarterly since 1961, began publishing the book in 2001, along with another book on the history of Kuala Lumpur schools in Tamil.

In 2014, PLS published her second novel entitled Mother which includes 59 poems about her efforts to assist underprivileged children.

She did not write religious explanations, merely referred to these acts of kindness as an act of love and explained them by asking the world to look at the needs of others and do whatever possible to satisfy those needy.

Do little acts with great love that will alter the world!

Well, she definitely did!

Despite this hardship, Mother Mangalam integrated the feeling of absence into her daily religious life and remained committed to her work beyond race, religion, and economic status for needy people.

Always remember, whatever difficulties come in life, there is our connection to the supreme one – Mother Mangalam

It’s safe to say this Mother Theresa of Malaysia has amplified and embedded love and hope for many generations to come! A true matriarch indeed!