“If you can laugh at yourself, you are going to be fine. If you allow others to laugh with you, you will be great.” – Martin Niemoller

Tamizh Padam 2 embodies this quote, being a Tamil movie that literally laughs at itself in various scenes, leaves us in peals of laughter just halfway through the movie. A parody of the actual successful Tamil films, this movie pokes fun at the likes of Vettaiyaadu Vilaiyadu, Bahubali, Vedalam, Vivegam, 24, Vikram Vedha, Mersal, Thuppakki, Aambala and even Kabali (how dare they!). Director C S Amudhan seems to have taken notes at every Tamil movie released since the first Tamizh Padam, and stirs up a riot with some memorable scenes, such as the infamous “Oru kathai sollata sir?” There’s even a Game of Thrones reference!

Shiva is exceptional (No, really, he is!) 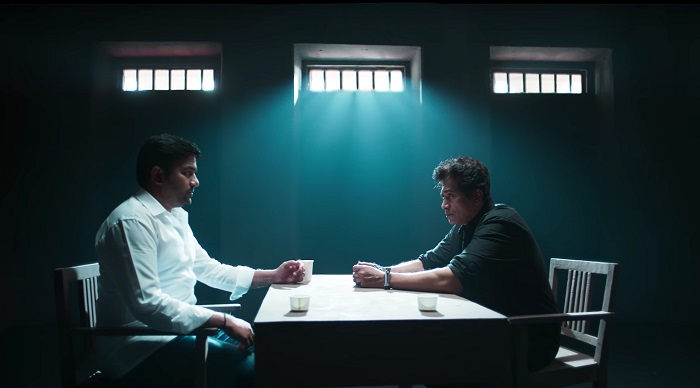 Shiva effortlessly mocks Tamil film stalwarts but maintains his charm, delivering a top notch performance. And because he’s so endearing, even the die hard paal abishegam fans would enjoy his performance. His self deprecating comedic style fuses in brilliantly with the parodies portrayed. We never thought we’s say this but Shiva has really proven himself as an actor, excelling in this genre of movies.

No Storyline? All the better!

The lack of story turns out to be the biggest plus point for Tamizh Padam 2. We don’t care that Shiva is a cop on a hiatus who has been brought back to help apprehend villain P. We didn’t bat an eyelid when he suddenly appears in the US for no reason and makes use of his ‘instinct’ to discover that an area has many dead bodies buried. We did however, laugh with derision when the area which turns out to be a cemetery. A flashback to the 1400s came and went and we were still glued to the screen, just to see which movie is made fun of next. The logical loophole works wonders for Tamizh Padam 2.

An ode to every cliched Tamil song ever

Tamizh Padam 2 did justice to every one of these integral aspects of a Tamil film. C S Amudhan nailed the lyrics to a few of these songs while N. Kannan’s music was on point. Watching actress Kasthuri Shankar perform an item song in the police station while everyone went on with their work left us in stitches. But we also felt a sense of pride, looking forward to more opportunities for older women to embrace their sexuality, and not just take on mother or akka roles.

Special mention to the song Evada Unna Petha, the song that blames men instead of women, and we cannot thank the lyricists enough for bestowing us with such sacred lines.

Satish plays the villain in Tamizh Padam 2, and for some inexplicable reason he dons a different costume in every scene. We can’t complain. This actor compliments Shiva very well and it was great to see him in a role that didn’t have him be the best friend of the hero, cracking unnecessary jokes. Satish may not have the chops to be an all out villain, but he did justice to the role of P.

The Insignificance of Tamil Heroines

A scene where Shiva is hanging out with his college friends (three elderly chaps in youthful garb) plasters the harsh truth of the portrayal of women in Tamil films. “What if she doesn’t like me?” asks the hero, to which his friends burst out laughing. “It doesn’t matter whether she likes you or not! You’re the hero, and you can do anything you want to her to make her like you. Lie, stalk, harass, cheat even kidnap her if you have to, you can do anything you want and she will ultimately fall in love with you!”

Tamizh Padam 2 embodies the role of the heroine in Tamil films. Which is absolutely nothing. Shiva’s wife dies and after ONE DAY, his grandmother tells him that he has mourned enough, hence he needs to look for another wife. As he navigates through the movie, the heroines come and go, none with any significance but to look pretty on screen and accompany him during the duet. And that, ladies and gentlemen, is the role of a lead actress in Tamil films.

Tamizh Padam 2 is a satirical masterpiece. One can only hope that filmmakers watch this movie and laugh at themselves for coming up with such rubbish in the past, and strive to do better with their upcoming projects. Until then, if you’re a cynic like us, we highly recommend you watch Tamizh Padam 2!