Are you willing to be that samaritan? 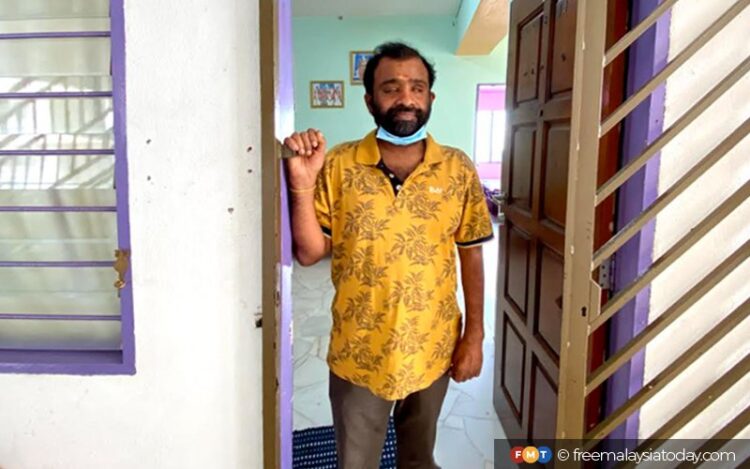 When everyone on social media is talking about the viral campaign #benderaputih, we have Harrichandran Manokaran, who appears to have no idea what the campaign is all about.

Harri is a former flower seller who lives on a 17th floor flat in Taman Bukit Jambul, Penang.

The 42-year-old is blind and diabetic, and he is in dire need of help because his current home is about to be sold. When the lifts aren’t working, he is forced to climb up a flight of stairs to his flat that takes a strenuous  hour and a half.

Vimalan Chandrasekaran, an activist, has been very kind and has been bringing the helpless man meals for the past month after hearing about his plight.

According to Free Malaysia Today (FMT), Harri is looking for a low-floor flat and is willing to pay RM350 in rent using his social welfare aid and Socso money. He stated that he was interested in a city council flat located in a five-story walk-up building near the Pesta grounds in Sungai Dua.

Harri lives alone as his wife left in 2014, two years after he went blind as a result of a stroke, taking their 11-year-old son with her. Harri stated that he communicates with his son via phone.

He continued to operate the flower stall after going blind until 2018, when his health deteriorated resulting in kidney failure, and he now requires regular dialysis.

He continued to make jasmine garlands and tie other flowers on demand at home while also selling vitamins over the phone for a direct selling company, earning RM30 per sale. However, business was difficult to come by during the pandemic. He only sold three boxes since the MCO began last year.

He receives RM300 in social welfare aid each month, as well as RM900 from Sosco, which also covers his weekly dialysis treatment.

However, RM1,200 is insufficient to support him. Half goes to rent, and more than RM500 goes to Grab to get him to his dialysis centre three times a week. The rest is spent on food. His friends bring him hot meals on occasion, and his younger sibling in Klang orders vegetarian food through e-hailing apps.

Despite his inability to see the world, this man has a strong muscle memory and can tie flowers, which he learned at the age of 12. He can even remember phone numbers by heart.

Now that he has raised his white flag, who is willing to help him? If you’re interested in helping him, send a WhatsApp message to FMT’s Helpline at 0193899839. There will be no phone calls, only texts.