No plea was recorded from the accused. 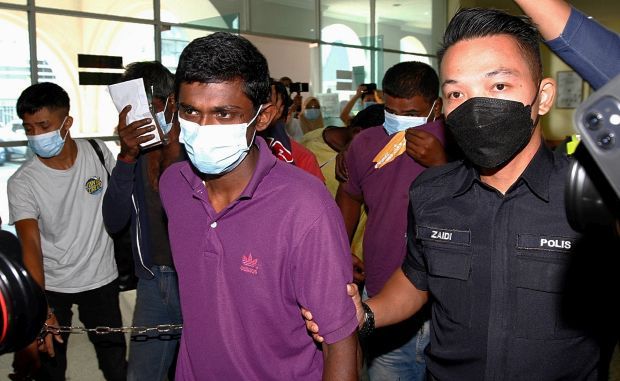 M.Kirubakaran, 29, (in purple) being escorted into court where he was charged with the murder od a 40-year-old woman and two drug related offences at the Seberang Prai (Municipal) Magistrate Court, Butterworth. ( September 7,2021 ). —ZHAFARAN NASIB/The Star

M. Kirubakaran, a cow herder was charged with murder over the death of a Chinese woman, Lee Ling Tee at a double-storey house in Taman Seruling Emas, Sungai Jawi in Nibong Tebal on 28th August.

The 40-year-old woman was believed to have suffocated to death when the incident took place, in a case that has sparked outrage in Malaysia. The 29-year-old nodded when the charge was read to him before Magistrate Aziana Azib. No plea was recorded from the accused.

According to South Seberang Prai OCPD Supt Lee Chong Chern, the crime took place about 3am after the suspect took Syabu with his friend. Later on, he borrowed his friend’s motorcycle for a ride to the victim’s house through the back lane and broke in via a window.

He caught her asleep in bed and raped her continuously without any sympathy. She screamed as much as she could but unfortunately none of her neighbours heard her scream.

According to NST, a friend of Lee had dropped by her house since they had scheduled a meeting at 3pm. When the friend arrived at the house, she noticed a man on a motorbike was hurrying to leave the victim’s home. Due to suspicion, she quickly informed the victim’s elder sister and also the nearest police station.

On reaching the spot, police found that Lee’s house was in shambles and her body was found under a bed in a ground-floor room. Besides that, her belongings were thrown into the river near the Changkat area.

The man who had five prior criminal and drug convictions was charged with murder under Section 302 of the Penal Code, which carries a death sentence if found guilty.