Which one impressed you the most? 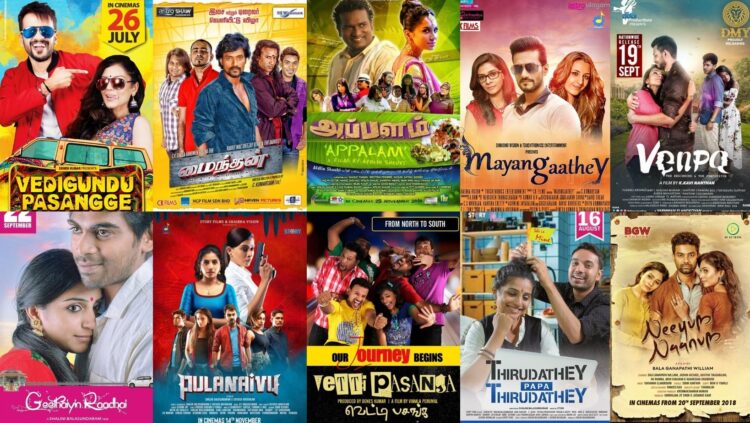 Movies are undoubtedly one of the most successful media platforms of entertainment until today. Just imagine how the world would be if there were no movies and poetry. It would look like we are eating plain rice without a side dish. The visuals in a movie has the ability to convey a lot of emotions and thoughts that sometimes a human has a hard time figuring out.

In the past decades, we witnessed how fast Malaysian Tamil Films are growing. So many amazing and entertaining movies in many genres were released. Do you know that some of our Malaysian Tamil movies have grossed over RM500K?

Now let us show you the Top 10 Highest-Grossing Tamil Films in Malaysia!

The first spot is held by Vedigundu Pasangge which made history by being Malaysia’s first and highest-earning Tamil language film, grossing RM 1.3 million. (Wow!) With its own popularity, the film has also received multiple honours at national and international film festivals.

The plot centres around Theva, a country lad. He finds himself in a twisted circumstance and realises that everything around him is a mystery. Things go wrong for Theva as a result of his ignorance of the boss’ true colours. The boss uses him as bait, which causes him problems. Theva learns a valuable life lesson.

Maindhan, directed by C. Kumaresan, who also played the lead role, grossed around RM903,550. It received critical acclaim and was the highest-grossing locally made Tamil film of all time until it was surpassed by Vedigundu Pasangge, in 2018.

After failing in his romantic life, Dev seeks solace in booze. In his condition, he frequently encounters an elderly guy who offers him pointers about how his day would unfold. He runs across a little child from a shelter home by chance one day. He notices an odd resemblance between the youngster and his ex-girlfriend and chooses to get to know the boy better, only to discover something Dev didn’t want to know in the first place.

Afdlin Shauki directed the 2011 Malaysian comedy-drama film Appalam. Appalam was also the highest-earning locally produced Tamil film of all time, grossing RM590,707.00 before being surpassed by Maindhan in 2014.

Appalasamy (Gana) and his wife Nalaini (Jaclyn Victor) have a beautiful daughter named Shruthi (Raja Ilya). Nalaini becomes involved in a vehicle accident one fateful day while on the phone with Appalasamy. He assures his late wife that he would look after their daughter, which causes him to be overprotective of her. Shruthi, at the age of 17, intends to pursue her education in performing arts in Kuala Lumpur and become more self-sufficient. Appalasamy secretly seeks a job as a gardener at her college to look after her. When a famous singer decides to court Shruthi, trouble begins to brew.

Mayangaathey is a Tamil language romantic comedy horror film directed by C. Kumaresan. This movie has collected about RM554,816.96.

Aravind (C. Kumerasan) is a biker from Sabah who meets Kaaviya (Datin Sri Shaila V.) and falls in love with her at first sight. After getting to know her, Aravind learns that Kavya is a single mother and all this while, her life is decided by her family. However, what Aravind does not realise is that everything has been planned from the start and he has fallen into Kaaviya’s cunning trap. 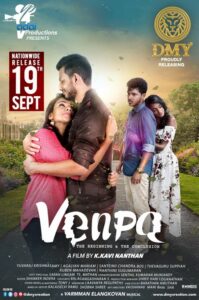 Thenavan always rejects women chosen by his mother for him. Sheila is a sweet girl who is often rejected by guys. She falls in love with Thenavan on their first meeting over his comforting behaviour. But Thenavan is still in love with Kalyani, a woman he has loved since his school days, but Kalyani seems to have no feelings for him. The story will take a huge turn after this as it will unlock a huge secret in the end.

Geethaiyin Raadhai was directed by Shalini Balasundaram and this movie grossed RM529,162.00 making it the sixth-highest-grossing Malaysian Tamil film.

According to the story, the heroine looks for the right person in her life to marry, and when she meets the hero, and finally they fall in love, and the remainder of the plot is about how they deal with the challenges and struggles that come with their love journey.

Pulanaivu is a crime thriller film and this movie grossed about RM512,048.50. To date, this movie has the highest number of cinema listings in the category of local Tamil-language films.

This film depicts a couple who are entangled in a sudden murder which took place at their college. Meanwhile, a female cop, Bhairavi is tasked at tracing the few suspects leading her to the murderer. The movie involves a lot of suspense and thrilling scenes.

Vetti Pasanga which is produced and directed by prominent filmmaker Vimala Perumal is the eighth highest-grossing Malaysian Tamil film, with RM339,036.00.

The film tells the story about Denes and Karadi whom are living life to the fullest just like any other youngster. They aspire to be where the limelight is, work for their dough but with an exception, their lives also bring the fast life of cheating and deceiving if it means to lead them to the life of the rich and famous, but in this case, a wannabe life of the rich and famous.

Thirudathey Papa Thirudathey holds the ninth place with RM322,400.00 in this highest-grossing chart. This movie is directed by none other than the talented actress Shalini Balasundaram who also plays the lead role along with Saresh D7 and Kabil Ganesan.

Thirudathey papa Thirudathey is a romantic action based film, which has 2 different characters who share the same passion, yet distinguish ways and upbringing that defines them.

Neeyum Naanum was inspired by Korean and Kollywood Movies (A Moment to Remember, Uyire and Kandukondein Kandukondien) has grossed about RM307,956.00 and holds the 10th spot as the highest-grossing Malaysian Tamil Film.

Karthik is a photographer by profession alongside his two other friends, Arun and Viki. One fine day, he meets Oviya and becomes head over heels in love with her.