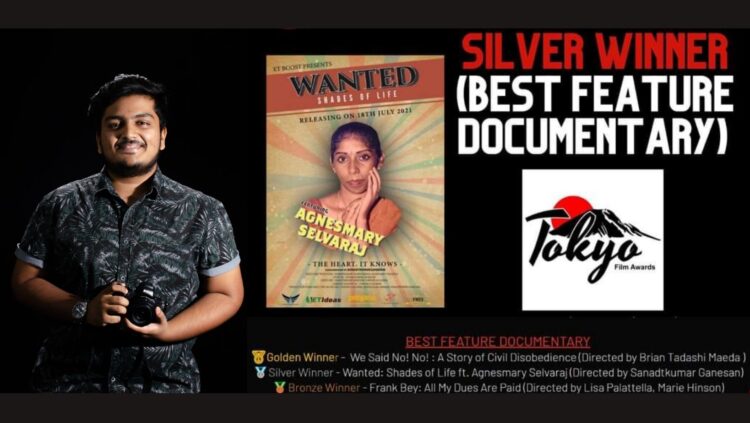 I THINK, AT THE END OF THE DAY, FILMMAKING IS A TEAM, BUT EVENTUALLY, THERE’S GOT TO BE A CAPTAIN.” said Ridley Scott.

And that captain is none other than the most promising young filmmaker Sanadtkumar Ganesan. It’s always a proud and exciting moment for us Malaysians to witness our young filmmakers recognised for their talents at the global arena.

This young filmmaker shook the local movie scene when his film ‘Wanted: Shades of Life ft. Agnesmary Selvaraj’ became the Silver Winner under the category of Best Feature Documentary at the Tokyo Film Awards for the month of November 2021. (Congratulations)

Last September, Wanted 2 was also nominated for the Semi-Finalist spot at the Stockholm City Film Festival.

This film depicts the beautiful journey of Agnesmary Selvaraj who is a classical Bharatanatyam dancer and dance teacher who runs Rhythm Dance, a dance academy for kids to grow, learn and become the best versions of themselves.

This young lad said Agnesmary Selvaraj’s fun-filled and truthful life was the inspiration behind the movie and is thankful for the talented and prominent dancer for allowing her story to be shared to the world.

Sanadtkumar Ganesan is a documentary filmmaker, storyteller and entrepreneur who’s living his childhood dream of becoming a filmmaker.

He was overjoyed that this film, which was made on a shoestring budget, in a short amount of time, and with few resources, was recognised by so many different countries.

He was only 14 when he became the co-founder of Ascendance.

Sanadt dabbled into different film genres and has been a video editor since he was 15. From editing talk shows to music videos, he honed his skills as an editor and moved on into other things.

Sanadt said if more young filmmakers like him had more support, funds and resources, the local movie industry could cultivate a host of brilliant unrecognised talents awaiting recognition and opportunity to feature their works internationally.

This talented young lad said the profits and funds he gets from this film will be used to support his education at the Toronto Film School part of Yorkville University in Canada where he intends to explore and learn more about film production.

This film premiered on ET Boost YouTube platform on 24th July 2021 and was produced by ET Boost, in collaboration with ET Ideas, Ascendance, PMDK, CENDANA and Penjana.

You can watch this beautifully told film on ET Boost YouTube channel:

Click HERE to learn more about Sanadtkumar and his works in the filming world.