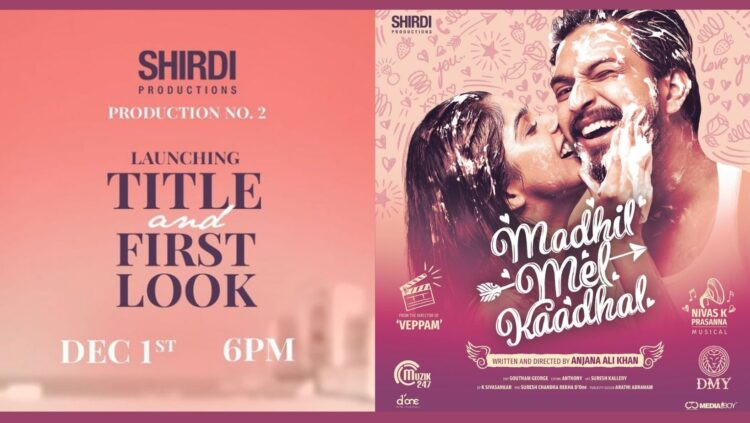 As he rose up in the cine world after his BiggBoss success, the young heartthrob has been getting movie offers to star alongside prominent actors and actresses. He has since debuted as a Kollywood actor.

The singer-actor launched the first look on his Twitter platform after giving hints on his Instagram. Check this out!

Maadhil Mel Kaadhal is a romantic genre that was written and directed by the fame of Veppam movie, Anjana Ali Khan. Divyabharathi who has just debuted in GV Prakash‘s movie, Bachelor will be playing the lead role in this film alongside Sakshi Agarwal and Vijay TV star, KPY Bala.

Indian film composer and singer, Nivas K Prasanna from Konji Pesida Venam fame and Sethupathi will be scoring music for this movie.

Our homeboy previously signed up with the same director Anjana Ali Khan for his debut film, Vettri. Mugen Rao is said to be playing the lead and former Miss India, Anukreethy Vas will be playing the female lead along with another popular Kollywood face Kishore, who would be playing quite a significant role in this film.

Mugen who is popularly known as ‘MGR’ acted in Velan by playing its lead role. Meenakshi Govindarajan plays the female lead in the commercial entertainment produced by Kalaimagan. In addition, star Suriya has launched the trailer for this flick. This film also has major performances by Soori, Prabhu, Thambi Ramaiah, and Hareesh Peradi. The family drama directed by Kavin is produced by Kalaimagan’s Skyman Films and has music by Gopi Sundar. You may watch the teaser on the Think Music India YouTube channel;