8 Captivating Indian Traditional Dance Styles That You Should Know 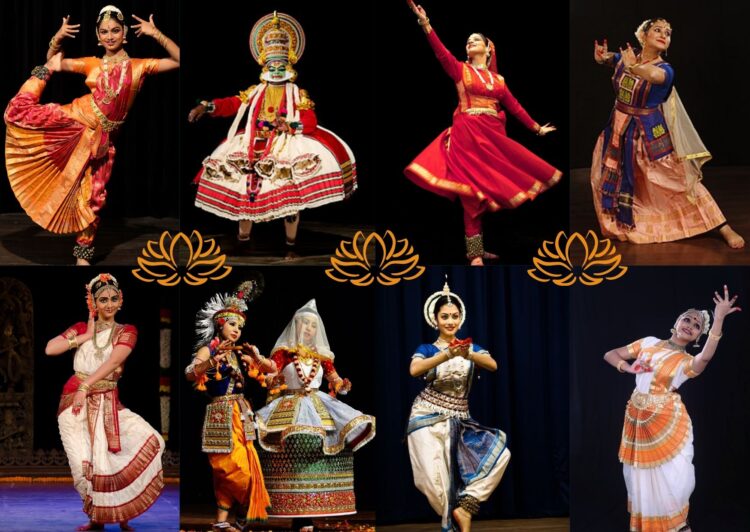 Indian traditional culture is made up of music, dance, and folk performances. Each of India’s ancient provinces cultivates a rich tradition of dance and music, with various types of classical dance passed down through the years, from Tamil Nadu in the south to Uttar Pradesh in the north.

Dance, music, and art are everywhere in India. Traditional dance performances may be found in all of India’s main regions, and locals are fiercely proud of their vibrant, old cultural traditions.

Let’s look at the 8 dance types that has been recognised by Sangeet Natak Academy.

The most ancient and widely practised style of Indian traditional dance. Bharatanatyam arose in the Hindu temples of Tamil Nadu, in the Indian peninsula’s southeast corner.

As is customary, Bharatanatyam is most typically performed by a single female performer nowadays. Traditional Tamil Hindu wedding garb, including a colourful sari and leather belts for hanging jewellery, is worn by the dancers.

The Kathak dance form, which originated among the travelling Kathakar’storytellers’ of northern India, is steeped in North Indian tradition and is now regarded one of India’s most popular classical dances.

Though the dance’s popularity waned during India’s colonial control, it has since recovered, with Kathak dance troupes becoming among the most popular cultural performers in the country, particularly in the northern provinces.

Kuchipudi dancing, like many other forms of traditional Indian dance, has its roots in ancient Hindu writings, particularly the ‘Natya Shastra,’ which is connected with Andhra Pradesh’s Krishna area.

Early versions of this literature, carved in copper and discovered in the region’s old temples, depict a sort of Hindu religious dance and cultural performance that was disseminated throughout India centuries ago by the country’s famed wandering bards.

Odissi is India’s earliest style of classical folk dancing, according to archaeological evidence.

Odissi dancing’s theoretical underpinning is widely recorded in ancient Sanskrit texts, and its steps, shapes, and distinctive hand gestures are etched on the sculptures and paintings of Hindu temples and shrines throughout Odisha.

Odissi is now practised by a number of religious groups in the Odisha area, including Hinduism, Buddhism, and Jainism.

Kathakali is one of India’s most unique classical dance routines, with its colourful costumes, story-driven storyline, and exquisite footwork.

Pacha, Kathi, Thadi, Kari, and Minukku are the five varieties of ‘Vesham’ cosmetics worn by Kathakali dancers, according to tradition. These many appearances, which include ornate headgear and costly face paint, are meant to symbolise various characters in the tale, including heroes, villains, demons, and female characters known as sages.

Sattriya dance was introduced in the 15th century by Vaishnava, the patron saint and cultural reformer of Assam, a state in northeast India.

Sattriya is one of India’s most distinctive dance traditions, drawing on the old folk rites of Ojapali and Devadasi to produce a dance that is unique to the Assamese area. It was cultivated and maintained alive for generations by Assam’s Satras Vaishnava monks.

Manipuri
The origins of Manipuri dance may be traced back to the ancient state of Manipur in northwest India.

Manipuri evolved a distinct cultural practice influenced by Shiva and Parvati’s holy dance traditions, and this dancing has since become a cornerstone of the region’s regular religious festivals and ceremonies.

Without a doubt, Manipuri is one of India’s most illustrious and interesting traditional dance traditions.

The dance comprises a number of genres, including Ras, Sankirtana, and Thang-Ta, each of which has a variety of steps and gestures, and focuses on the separation of Gopi and Radha from Krishna.

Mohiniyattam
Mohiniyattam is commonly regarded as a more feminine kind of dance, with delicate movements, elegant body motions, and light-coloured clothes intended to convey a sense of tranquilly.

Mohiniyattam is a Lasya-style dance in which a lone female dancer performs light, delicate dances to the accompaniment of music.

Dancers generally wear a white or slightly off-white sari with gold jewellery, as well as vividly coloured makeup on their faces to draw attention to their expressions.

Cultural dance is extremely significant since it is our method of informing others about the aspects of our culture that they should be aware of. It’s also the means through which other people may respect, learn about, and value our traditions and customs. It’s never too late to learn our traditional dance, it just needs our little time and effort.