Ulagam Awards; You May Now Vote For Your Favourite Artist! Recognition and appreciation are key in cultivating acknowledgement for they boost an artist’s skill and talents.

Ulagam Awards Show will be held by Astro Vinmeen HD to honour and award the artistic excellence of Malaysian Indian artists for their work on television and radio. 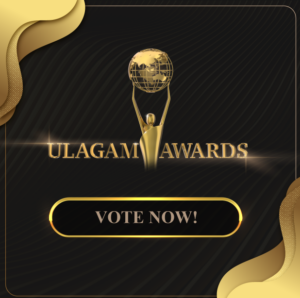 All Malaysians are welcome to vote for their favourite talents.

Voting is open on Astro Ulagam’s official website from now until January 12, 2022.

The Ulagam Award is divided into two categories: ‘Popular Awards’ and ‘Best Awards.’

The 14 ‘Popular Awards’ sub-categories that are open to public vote are as follows:

4. Popular Series of the Year

5. Popular Telemovie of the Year

8. Popular Raaga Announcer of the Year

10. Popular Music Composer of the Year

What are you waiting for? Start casting your votes now!

Ulagam Awards; You May Now Vote For Your Favourite Artist!