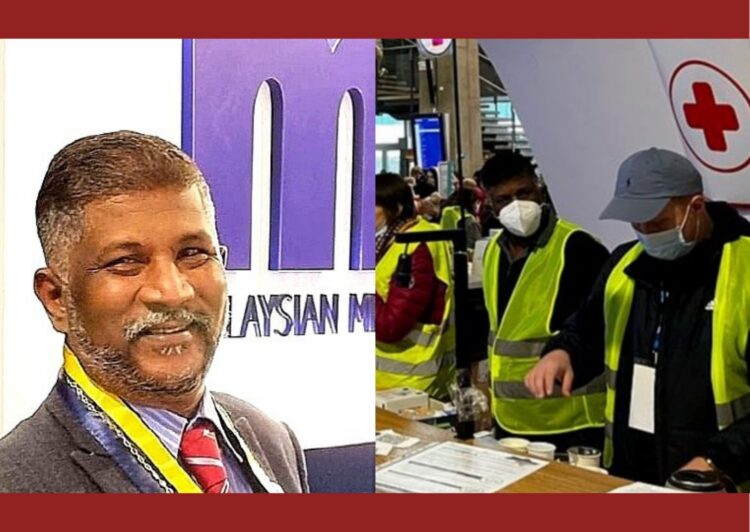 I’m sure that the majority of us are aware of the ongoing conflict between Ukraine and Russia. Since Russia began the war on February 24th, more than 1,000 civilians have been killed in Ukraine, 1,650 have been injured, and more than 3.67 million Ukrainians have fled to neighbouring countries, according to UN estimates.

The term “warzone” might elicit anxiety in certain people, and it may make them reconsider entering or helping in a war. Putting all of that aside, we can see many of them bravely helping the vulnerable at the battlefield.

In that note, earlier this month, Dr Muruga Raj Rajathurai volunteered without hesitancy at a centre in Warsaw, Poland which was sheltering Ukrainian refugees.

The Malaysian doctor, who has been volunteering at Warsaw Central Station for 11 days, provides medical assistance to thousands of Ukrainians who have crossed into Poland to flee Russian bombardment in their homeland.

Following the escalating Russia-Ukraine conflict, Dr Muruga, who served as a medical volunteer, said he was concerned for the safety of his three children and his brother’s two children, all of whom are students at the Medical University of Warsaw, spurring him to travel to Poland to be with them on March 3rd.

After ensuring the safety of his children, the 55-year-old doctor said his son informed him that many Ukrainian refugees were starting to assemble at Warsaw Central Station seeking of shelter.

“At that point, I felt I could help, therefore from March 8 to 19, I volunteered as a medical volunteer there,” said the general practitioner at a polyclinic in Johor.

By making a meaningful difference in the lives of the refugees at the centre, his generous deed exemplified how humanity and compassion know no bounds.

Dr. Muruga, who is also the president-elect of the Malaysian Medical Association (MMA), said it was heartbreaking to witness how refugees, particularly children, were separated from their families to travel into Poland with only a few supplies.

“Many of them fled Ukraine and crossed the border into Poland in search of safety, leaving behind their family members”,  he added.

“Most of the refugees are stressed and anxious because there is no definite date or time when they will be able to return to their homeland. It was saddening to see how some Ukrainian refugees made their journey to Warsaw without any of their personal documents with them because the situation in the country was so chaotic,” he added.

At the centre, at least 1,000 refugees received medical care on a regular basis.

He stated that volunteers at the centre, including himself and his medical team, had done their utmost best to provide as much care and medical attention to those in need as possible.

Dr. Muruga also expressed his gratitude for the humanitarian efforts and compassion shown by the Polish people in supporting Ukrainian refugees in their nation.

“My son is also helping in sourcing and distributing food to the refugees on a daily basis,” he said, noting that he had returned to Malaysia on 21st March.

We’ve had enough of the deadly virus that has robbed the lives of millions of people thus let’s all pray and hope that this conflict will end soon.